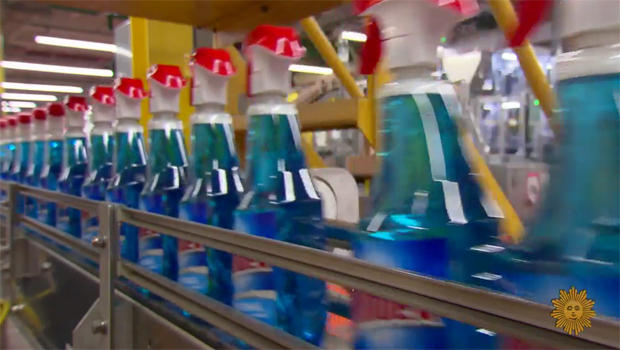 Starting this morning we’re IN GOOD COMPANY. It’s what we’re calling our occasional visits to some business people who make it look easy. With Lee Cowan -- we make a clean start:

Recognize the blue bottles of Windex? Or the cans of Pledge? Maybe you’ve got a can of it tossed in with your dust rags, along with your Drano, some Scrubbing Bubbles, and perhaps a bottle of Shout.

Remarkably, all these products -- and shelves full of other familiar brands -- come from a single Wisconsin company, one with a simple but oddly forgettable name: SC Johnson.

But just in case, on the back of every SC Johnson product is the CEO’s signature, as if each was a signed greeting card from the Johnson family. And in a way, says Fisk himself, it is.

“Me and my siblings grew up living and breathing this company,” he said. “It was part of the dinner table conversation every single night.”

The “SC” in SC Johnson was Fisk’s great-great-grandfather, Samuel Curtis. He was a parquet floor salesman in Racine, Wisconsin, when he realized that there were more floors than there were products to keep them clean.

He mixed his first batch of Johnson’s Wax in his bathtub -- and the rest, as they say, is history.

“He just abandoned the flooring business and started selling wax all over the place,” Fisk said.

That was in 1886. In all, five generations of Johnsons have led this now-$10 billion a year company, making it one of the oldest family-owned businesses in America.

But while their products may be household names, the Johnsons themselves prefer to keep a lower profile. They don’t trumpet themselves as a dynasty. They rarely do media interviews, and they have never considered allowing the company to be publicly traded.

“You know, we get some of the best information about what our competitors are doing from Wall Street,” Fisk said. “And I’m sure they kind of look at us and just see kind of a black box out there -- which is a good thing!”

Its headquarters, however, is hardly a “black box.” In fact, for a company that likes to keep things private, it makes quite a statement in downtown Racine. “There is nothing normal about this building,” Fisk said.

They support the building’s only real window -- a glass ceiling -- which floods the huge open floor plan below with natural light. At one time more than 120 people worked in this room.

“It makes you feel like you’re kind of inside a forest looking up at the canopy,” Fisk said.

Wright called it his “corporate cathedral.” He even designed the office furniture, which included some three-legged chairs, which Fisk says were very unstable -- “People were falling out of them.”

Wright later replaced the three-legged versions with four-legged ones that are still in use today -- and are now worth a small fortune.

Cowan asked, “How much does it cost to keep this up?”

“I hate to tell you,” Fisk laughed. “We, believe it or not, in the last couple of years have put $30 million into this building.”

Next door is the 15-story Research Tower that Wright also designed. It opened in 1950. Its odd skeleton can best be seen at dusk.

“It has a central core that’s 13 feet in diameter, like the trunk of a tree” said Greg Anderegg, who used to work for SC Johnson and later helped with the tower’s restoration. “And all of the floors are hung off of that central core like the limbs of a tree.”

Wright again wanted to allow in natural light, but instead of just plates of glass, he decided to use glass tubes instead -- 17 miles of them.

“We hand-cleaned every one of them -- I might point out that we used Windex to do that!” Anderegg laughed. “And they look sparkling and look great.”

It now looks much as it did when Bob O’Brien worked here. He said, “It was always bright. But you just felt like you’re working in a snow globe.”

Despite having to wear sunglasses while formulating his products, he loved it.

“Formulation is an art. And I would come into work, and these benches in this laboratory that was our canvas, a canvas that Frank Lloyd Wright built, right? So you come in here and you just couldn’t help but feel inspired. There was just the energy.”

The Tower became integral to SC Johnson’s success -- even part of its ad campaigns. It was the womb for some of the company’s most recognizable brands, from Glade air freshener to a bug’s worst nightmare.  Raid was developed by Sam Johnson, Fisk’s father. It killed bugs but not plants, which at the time was revolutionary. But it was also the first of Sam Johnson’s string of products that didn’t contain any wax.

“My grandfather said to him, ‘Don’t you know we don’t make any products without wax in them?’” Fisk recalled. “And my father said, as the story goes, ‘Well, we could put a little wax in it, but I don’t think that’ll do any good!’”

Fisk knows his Dad’s are pretty big shoes to fill -- and no matter the Johnson who takes over after him, he says they’ll probably feel the same way.

Izzy Johnson is Fisk’s niece. She’s just 25. She doesn’t know if the baton would come her way. And yet … she feels the generational pull the company seems to have: “A pull in a sense that it’s something that I want to contribute to, because it’s something that I’m so proud of and has been so close to me for so long.”

It’s a tradition, and a privilege, says Fisk Johnson, that comes specifically from remaining a private, family-run company.

“The way public companies are operating out there today, in my mind, is very dysfunctional,” he told Cowan. “They don’t care about people. They cut costs, because Wall Street values short-term gains. And they make a lot of money in the process and then they move on.”

There are bigger family companies with bigger payrolls, but what SC Johnson has managed to keep alive is a sense of big business with a small feel.

It seems progress doesn’t always mean looking ahead. Sometimes it’s about remembering where it all started, too.