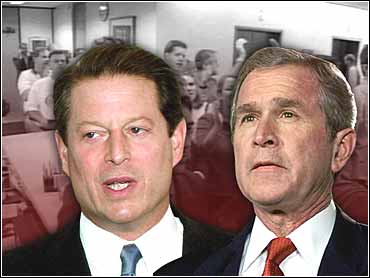 The protracted election battle continues to take a toll on perceptions of Vice President Al Gore, as Americans begin to lose patience waiting for an outcome not yet in sight. Still, there is concern among many that the votes in Florida haven't been and won't be accurately counted, and there are doubts that either candidate would be able to unite the country as president.

Consequently, there is a division over what should happen now. Fifty-four percent say it's a good idea for the U.S. Supreme Court to be involved in the election. But 39 percent disagree. Americans are almost evenly divided on whether George W. Bush should start to form his administration before the court cases are decided. And while 42 percent say Al Gore should concede now, 48 percent say it's too soon for any concession.

Americans are increasingly skeptical that a fair and accurate count of the votes in Florida will occur. But they also are becoming more impatient with the delay; a delay that is lasting longer than many expected it to. Fifty-two percent say they have lost patience with the fact that the election isn't resolved yet, up from 45 percent who felt that way last week. Forty-five percent are willing to wait longer for a resolution.

As was the case last week, Gore supporters have more patience than Bush supporters: 64 percent of those who voted for Gore are willing to wait longer, while 73 percent of Bush voters are losing patience. What also matters is who people think is ahead in the national popular vote. Democrats who incorrectly believe Bush is ahead of Gore nationally are much more likely to have lost patience than those who think Gore leads.

Nearly wice as many Gore voters as Bush voters are dubious about the final vote count.

But there is an even greater partisan division over the fairness and accuracy of the count certified on Sunday by Florida's Secretary of State. Eighty-nine percent of Bush voters say that the certified results were fair and accurate, while 83 percent of Gore voters say they were not. Overall, Americans divide on that count, 47 percent to 47 percent.

THE CAMPAIGNS IN THE AFTERMATH

It's clear that the protracted struggle is hurting public opinion of Vice President Al Gore, while it is not having much of an impact on overall perceptions of George W. Bush. Some of that clearly comes from the increasingly negative evaluations of the Gore campaign's handling of the post-election uncertainty.

Bush and his advisers have the popular advantage at this point – 50 percent approve of the way the Bush team is handling the election outcome. This is slightly more than approved of the Bush campaign's behavior two weeks ago.

There is now a clear difference in how voters evaluate the two candidates overall. Gore is now as likely to be viewed unfavorably as favorably - something that has not been the case since the Democratic Convention this past summer. In contrast, Bush is generally viewed favorably by registered voters, although unfavorable opinions are slightly higher now than they were before the election.

But even though Americans are losing patience with the process and foresee it stretching out for weeks, there is not a strong popular mandate for either candidate to take action just yet. Just half thinit is appropriate for George W. Bush to select officials for his administration. Forty-seven percent think he should wait until the court cases surrounding the election are resolved.

THE NEXT STEP: TAKING IT TO THE U.S. SUPREME COURT

The next step in the process is Friday's oral argument before the U.S. Supreme Court on the Bush campaign's appeal of the Florida State Supreme Court's decision to allow hand recounts in some Florida counties. Fifty-four percent think it is a good idea for the Supreme Court to get involved in the election. 39 percent disagree. Sixty-one percent of Gore voters welcome its involvement, but only 48 percent of Bush voters feel the same.

More than half the public expresses quite a lot of confidence in the U.S. Supreme Court, a confidence level pretty much unchanged over the past twenty years.

Perhaps as a result of Florida's vote certification on Sunday, voters feel that a Bush win would be more legitimate at this point than a Gore win would be. In addition, while Americans believe that both candidates could lead the country effectively, they are not confident in either one's ability to unite the country if elected.

The public sees little difference, however, in the ability of the candidates to lead the country effectively. Sixty percent say Gore could lead effectively if he became president, and only slightly more – 65 percent - say Bush could.

Despite growing pessimism about the election's fairness and resolution, Americans still think it makes a difference which of these men gets into office. Americans see big differences between a Bush presidency and a Gore presidency: 74 percent of adults think that there are real differences in what each would seek to accomplish as president.

THE PARTIES AND THE NEW CONGRESS

Public pinion of the two parties has not changed since before the election. And while both parties are viewed favorably, in contrast to opinions over the presidential election controversy, Democrats are more popular than Republicans. Fifty-six percent of Americans view the Democratic Party favorably and 49 percent view the Republican Party favorably.

The public is negative about the prospects of the parties working together. Given the close division of seats in both the House and the Senate, Americans think partisanship is likely to increase, not decrease, in the new Congress.

Forty-seven percent of Americans say that partisanship is likely to increase since neither party will have complete control. Only 33 percent feel that partisanship will decrease because the parties will be forced to work together.

Just two weeks ago, Republicans were fairly divided over the wisdom of the Electoral College system, but now 53 percent are in favor of keeping the system intact. In contrast, the public in general continues to oppose the system – 57 percent - would rather elect the president by popular vote. Democratic views have not changed.

Part of Gore's public perception problem may be that more than a third of adults nationwide do not know he is currently leading in the popular vote. While 64 percent are aware that Gore is ahead, a quarter are under the impression that Bush is leading the vote nationwide, and another 13 percent admit to not knowing.

CHENEY'S HEALTH AND PERCEPTIONS OF THE WOULD-BE VICE PRESIDENTS

Despite the minor heart attack he suffered last week, most Americans believe that Republican vice presidential candidate Dick Cheney's health is not a matter or public concern, and half don't think his medical records need to be made public.

Sixty-four percent say that Cheney's recent heart attack and history of heart problems do not give them cause for concern about his ability to serve effectively as vice president. Only 33 percent say his health makes them concerned. Fifty percent think the Bush campaign was right not to have released Cheney's medical records during the election, while 41 percent think those records should have been made public.

Public views of Cheney are unchanged in the past month or so: 44 percent of voters have a favorable image of him, and 18 percent have a negative view. Opinions of Cheney's Democratic counterpart Joe Lieberman are suffering a bit: 33 percent of voters have a positive image of Lieberman, but negative assessments have risen to 21 percent from 13 percent before the election.

This poll was conducted by telephone November 27-28, 2000, among 1012 adults nationwide. The error due to sampling could be plus or minus three percentage points for results based on the entire sample, and four percentage points for registered voters. Sampling error for subgroups may be higher.
View CBS News In
CBS News App Open
Chrome Safari Continue