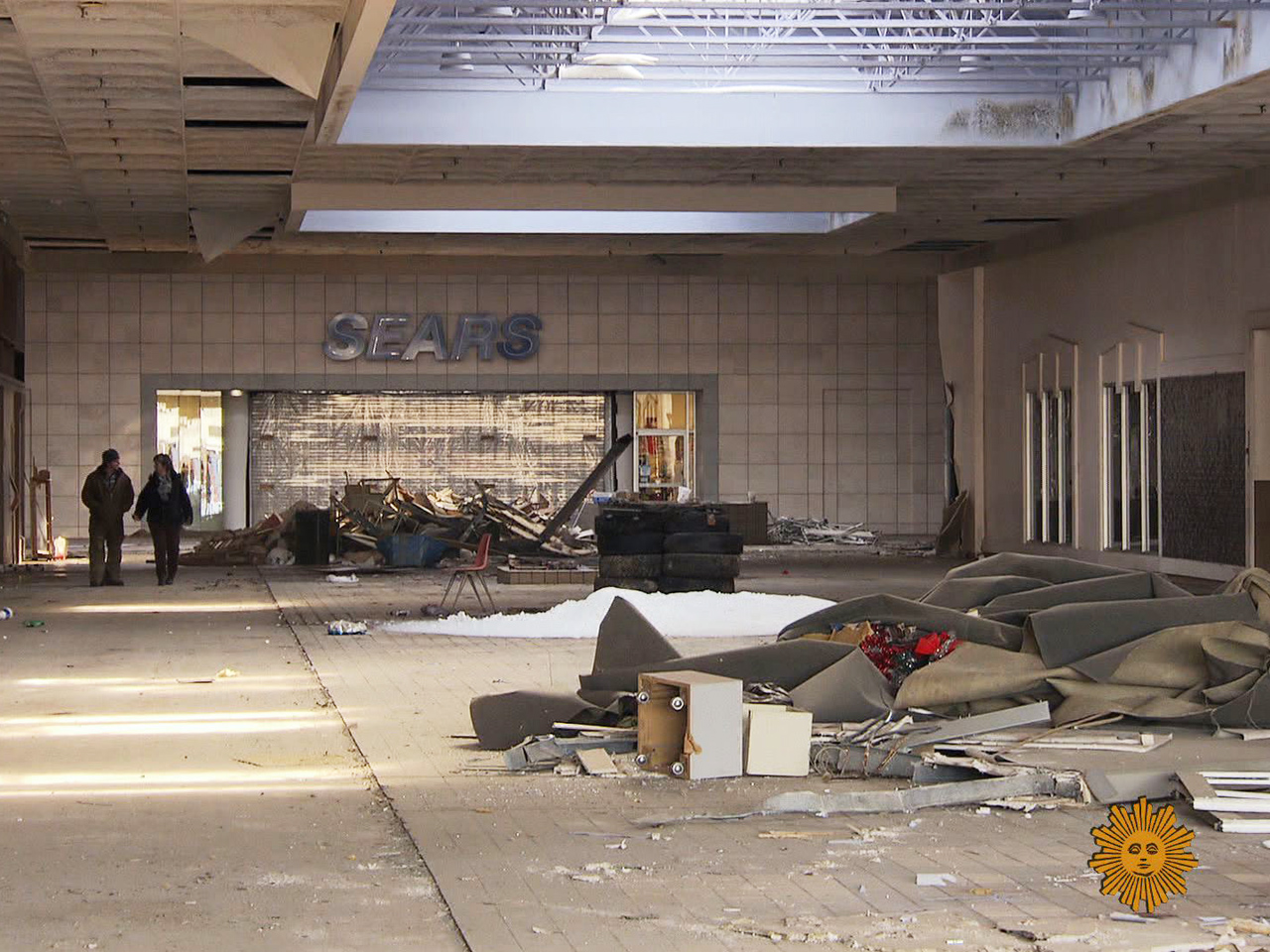 It used to be when a sign at the mall said EVERYTHING MUST GO, it meant a particular store was going out of business. These days it could very likely mean the entire mall is shutting down. Our Cover Story is reported by Mark Strassmann:

"This was a working fountain, wasn't it? Many, many years ago?" said Audrey Caligiuri.

These are the ruins of a dying culture: the American shopping mall.

Caligiuri grew up outside of Toledo, and like many of her generation, she spent much of her teenage years hanging out at the Woodville Mall.

"The mall was always the place to go," she said. "It was always busy. I mean, you couldn't even get parking spots a lot here. I probably spent most of my paycheck in my high school years at JC Penney's and Petrie's."

Audrey wasn't alone -- everyone wanted to go to the mall. For half a century the mall was the Mecca of our booming consumer culture, a fact celebrated in many a teen movie.

America's love affair with shopping malls began in 1956, when the nation's first fully-enclosed mall, Southdale, opened its doors outside Minneapolis.

"This was the most exciting period in this economy," said Robin Lewis, author of "The New Rules of Retail." "Actually, the most explosive growth anywhere on Earth at any time during history, the early '50s through the '70s.

"In the mid-'50s Dwight Eisenhower signed the Interstate Highway Act, and they constructed 54,000 miles of interstate highway. Now, what that did immediately is it provided mobility for the population which, prior to that, had been mainly rural. So they began to move into the suburbs and cities.

"But also, what it afforded was the ability to construct these regional malls, and they just exploded across the country."

Between 1956 and 2005, about 1,500 malls were built, including the Mall of America, one of the world's biggest -- 4.2 million square feet of stores, an amusement park, even a wedding chapel. And it attracts millions of visitors each year, from all over the world.

It was a Golden Age of shopping, which lasted until a new Golden Age came along, courtesy of the Internet.

"All of a sudden, the consumer now has every single retail store throughout the world a key tap away," said Lewis.

Today, malls across the U.S. are dying. No new enclosed mall has been built since 2006, and Lewis predicts fully half of all our malls will close in the next 10 years.

"Why would you get in your car and drive to a mall when you can just reach in your pocket?" asked Strassmann.

But on the outskirts of Atlanta, we found one formerly dying mall that's thriving. Where some saw financial ruin, Jose Legaspi saw opportunity.

In 2005 he took over a struggling, generic mall and transformed it into Plaza Fiesta, designed specifically to meet the needs of an exploding Hispanic population.

"We follow demographics," Legaspi told Strassmann. "Because it's nothing more than numbers game, I will tell you. You've got to have enough number of consumers to be able to support something like this, or any kind of mall."

Legaspi had turned dead space into successful Hispanic malls in several cities with large immigrant communities. Looking to expand, he discovered the Hispanic population of Atlanta had nearly tripled between 1990 and 2000.

But one thing was missing.

"The extended family concept is very, very key" to the culture of the Hispanic community, Legaspi said. "There was not a place where the families could gather. And shopping doesn't just mean shoes and clothing or eating at a restaurant; it's also a place where they can listen to music, sit down, relax, and spend some time with the family."

Plaza Fiesta has 280 stores, but there's also a doctor's office, and a dentist. There are hairdressers, money-wiring services -- everything you might find in a Mexican village. There's even a bus station to bring customers in; the mall had more than 4 million visitors last year.

And in another nod to the sense of community he's trying to foster, Legaspi has gone back to the future: "Every Sunday -- just remember 1950s America, people would come to the town square and they would listen to the band on the bandstand, right?" he told Strassmann. "Well, what we do every Sunday is we have music, and people can just come and sit down and relax and listen to the music."

"It's more than one-stop shopping, it's a one-stop experience?" Strassmann said.

"It's a one-stop experience, absolutely."

Robin Lewis says the lessons here can be learned by other malls, in other places: pay attention to a changing America, and give your customers something they can't get sitting at their computer.

So, if some dying malls are going to have a second life, Strassmann asked Lewis, what are the keys?

"Experience," he replied. "Entertainment. If we're going to drag them away from their smartphone and shopping on the Internet, you've got to give them a reason to spend the time to go and make the effort to go there. And the only way they're gonna do that is if there's a fun thing going on."

And an experience you can't get online.