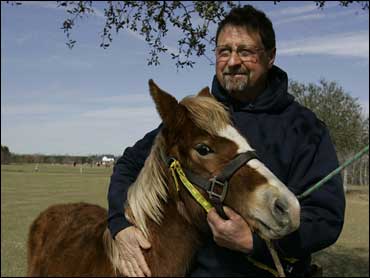 Horse breeders in South Carolina are coming together to save the tacky, a short-legged, sway-backed horse suited for toiling long hours in the swamps and oppressive humidity whose numbers are dwindling.

Their wild looks and workhorse reputation - their name comes from the old English word meaning "common" - didn't exactly make them prized among horse lovers. Only about 150 of the tackies, descended from horses left by colonial Spanish explorers, remain on the sea islands off the coast of the southern U.S. state.

"You have to acquire a taste for these horses," said David Grant, who has almost two dozen tackies on his South Carolina farm. "They are not as attractive as an Arabian, a quarterhorse or a thoroughbred, but now that I breed them and use them, beauty is in the eye of the beholder."

Those who know the tackies say there's plenty to love about them.

They can take hunters into woods and marshes that can't be reached by foot or four-wheelers. They don't flinch when a rider fires a gun from the saddle. Their deep, narrow chests give them more stamina than quarterhorses over long distances, and their hind ends slope downward, allowing tight turns in cane breaks and woods where other horses might have to back out.

"The South, and this entire country, they helped make it," said Ed Ravenel, who raises tackies on his farm outside the coastal city of Charleston. "When you put them in swamps and mud like we have around here in the Deep South ... instead of panicking and floundering around, they can just plow right on through it."

Intelligent and superbly adapted to the southern humidity and coastal marshes, tackies can be broken quickly and prove docile for even the youngest riders. They can survive on marsh grass and forage other horses won't eat.

"We haven't found anything they are not good at," said Jeanette Beranger, a program manager with the American Livestock Breeds Conservancy. "They jump like rabbits, have a lot of endurance and can thrive on nothing."

The conservancy has helped put together a breeders association to preserve the tackies.

Beranger estimates the population will have to increase to about 1,000 to ensure permanent survival. The more immediate goal is to get people interested in owning and riding them.

"I don't think they are ever going to overtake the quarterhorse in popularity," she said. But they are ideal "if somebody is looking for an easy keeper that is safe with children."

The tackies' colonial Spanish strain comes from the same ancestors as cracker horses in Florida and bankers from North Carolina. But DNA testing has found that the tackies are a separate breed, with unique characteristics thanks to their relative isolation.

D.P. Lowther, 76, a farmer in Ridgeland, S.C., rode tackies herding cattle as a boy and began breeding them decades ago because he worried about their survival.

He deserves much of the credit for preserving the breed, and now has about 100 tackies on his pastures, about 30 miles from Hilton Head Island. He got a number of his horses from the island as it was transformed into a resort destination.

"An 800-pound Marsh Tacky will ride a 1,200-pound quarterhorse into the ground," Lowther said.

Ravenel said today's tackies are a bit bigger than their ancestors because they are better cared for. He said breaking one of the horses is usually as simple as putting a saddle on it.

"If a man told me he would like a horse he can depend on to ride, to work, to put into several different disciplines, to haul and not worry about the horse breaking down or faltering or running off, the closest I could come to a guarantee would be one of these tacky horses," he said.