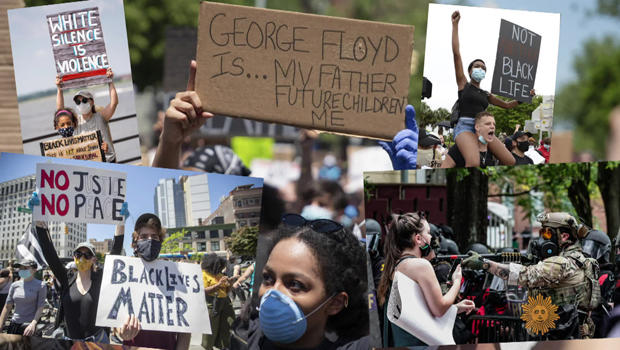 Just beyond a police station in Harlem stands a statue of Harriet Tubman, who led enslaved people to freedom on the Underground Railroad. Two symbols of strength a block away from each other – yet worlds apart.

"To witness the memory of Harriet Tubman, I would never say that things have not changed at all," said Crystal Fleming, an author and professor of sociology at New York's Stony Brook University. And yet, "We are here with police cars everywhere and streets blocked off because there are uprisings for the same movement that she was a part of."

Questions with uncomfortable answers and truths, for a country reeling from a pandemic that disproportionally claims black and brown lives; record unemployment for people of color; and protests stemming from the police killing of George Floyd in Minneapolis – the latest death of a black man at the hands of law enforcement officers.

Fleming said, "I feel the collective anguish of centuries and generations of black people who have had to survive this and have had to deal with people celebrating these myths of what our country is, right? The myth that this is a country of freedom, when we know that we have been unfree for so long."

A native of Memphis, Tim Wise is an anti-racism activist and the author of "White Like Me."  He told correspondent Maurice DuBois, "White America in particular has a long storied history of waking up briefly to this stuff and then hitting the snooze button and going back to bed."

He says it's called "white privilege."

"So, if people of color are being stopped and frisked and racially-profiled, those of us who are white, who may be doing the very same thing, are not under suspicion, are not stopped, are not frisked or not profiled, and are not arrested," he said.

Wise says for white Americans, the standards are different … and at times, so is the outcome.

"I was thinking about this when Ahmaud Arbery was tracked down and killed by those men in Georgia because they thought that because he had been on a construction site, you know, that somehow he was up to no good," Wise said. "I've gone on construction sites other than my own homes many times. When I was teenager, I went on them regularly to smoke weed, to drink underage. I doubt very seriously that I would've been arrested. And I certainly would not have ended up dead in the street."

"I'm going to tell them there's an African American man threatening my life!"

White privilege also played out in Central Park recently, when Amy Cooper called the police because Chris Cooper, an African American bird-watcher, had asked her to put her dog on a leash.

She called 911: "I'm being threatened by a man in the Ramble. Please send the cops immediately!"

"I think it probably happens every day," said Alyshia Gálvez, a professor who lives near Central Park. She told DuBois white people weaponize their privilege.

"I move through institutions, I've moved through academic institutions and universities, without anyone questioning whether I deserve to be there, [or] whether I earned my spot there," Gálvez said. "And I know that my students, my colleagues of color, my friends have been questioned as to whether they earned their place.

"To have to justify the place that you've earned is a tax that I don't pay."

But it is for people like Mark Whitaker, a media executive who was also the first black editor at Newsweek Magazine. "I've had that experience a lot of, you know, walking into a store and, like, people looking at me: 'Are you a shoplifter or, you know, whatever?'"

DuBois – who, like Whitaker, is a father – said, "To me, it's the most heartbreaking thing on Earth to tell these young beautiful boys that people who don't even know them hate them. 'The talk.'  It's what we have to do. This is reality. But it's the worst thing ever."

"My dad gave my brother and me the talk," said Whitaker. "And his term was 'lippy.' He said, you know, 'Never get lippy with a police officer under any circumstances, even if you think you're in the right and they're in the wrong.'"

What is happening now has played out for decades. And, Whitaker said, it's often the same event that triggers it: "Every single major episode of racial unrest, what people call riots, that we remember in recent history – with the exception of the ones that happened after Dr. King was shot – started with a police incident. Harlem in 1964; Watts in 1965; Atlanta and Cleveland in 1966.

"It is, you know, our original sin as a country, and one that I think, you know, probably we will always be wrestling with, frankly," he said.

So, what's next? Crystal Fleming says if change has to be made, it must come from within: "Maybe in recognizing the humanity and the dignity of this black person, you can come to recognize a bit more about your own human dignity."

DuBois said, "There are people with good will in their heart who say, 'I've been privileged. I've lived this life. What can I do?'"

The question to ask yourself, said Wise, is, "What kind of country do you wanna live in?"