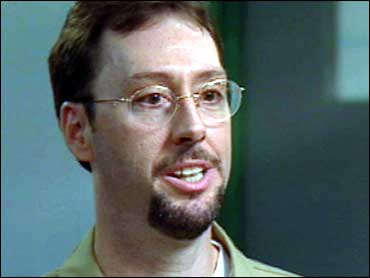 Patrick Bradford was once a proud police officer.

"There's no question I was exceptionally good at it," he says. "And it came naturally for me. And it was just like being right where you're supposed to be."

But today, Bradford is in prison serving 80 years for murdering his girlfriend, Tammy Lohr. In August 1992, she was stabbed repeatedly in her back and neck, before her body was set afire.

The crime rocked Evansville, Ind. Tammy, a 24-year-old civilian jailer, was attractive, energetic and popular. Bradford insists he had nothing to do with Tammy's murder. Susan Spencer reports on this tangled, tragic case.

At least one person believes him. Deborah Nolan, his close friend, is working to help overturn Bradford's 9-year-old conviction. His case has changed her life. At 34, she quit her teaching job to study law.

Their friendship goes back to childhood. "He stuck up for me a lot. And I just worshipped the ground he walked on when I was growing up," she says. He was the big brother she didn't have.

After high school, Nolan left town, got married and became a teacher. Bradford, meanwhile, joined the police. Guy Minnis, who trained 24-year-old Bradford back in 1986, thought his rookie charge had a promising career. "I thought he was a good, hard-nosed cop," he says.

Bradford was at police headquarters when he first met Tammy Lohr. Their friendship blossomed into a romance. But Bradford was married to his childhood sweetheart, Dawn, and they had two young children. He says he actually thought about leaving Dawn, but never quite could follow through.

On the night of Aug. 1, 1992, Bradford dropped by Tammy's house on his way to work. He then began his overnight shift. As usual, on his way home the next morning, he headed back to Tammy's house. Then, he says, he noticed something alarming: "There was smoke coming from under the eaves of the house.

He says he ran into the house. Crawling beneath the smoke, he says, he could see into Tammy's bedroom…

"I could see what looked like flames, arcing out from underneath where the bed would be. I felt it was pretty hopeless that she could survive that," he says.

He says he went no further. Once outside, Patrick radioed for help. Firemen quickly arrived, and when the blaze was out, made a grisly discovery. Tammy had been stabbed 21 times. Her body and bedroom had then been set ablaze with gasoline. In the living room, her dog lay stabbed to death as well.

That morning, Bradford gave a statement. Minnis was the lead detective on Tammy's case. Among the suspects was a former coworker of Tammy's, Finis Vincent, Jr. Tammy had complained about sexual comments Vincent had made and he partly blamed her for losing his job. Five months before, Tammy had reported seeing Vincent slouched in his car outside her home around 3 a.m.

Minnis and his partner visited Vincent, spoke to him briefly, and decided he was innocent.

Minnis also ruled out Bradford's wife, Dawn. "Tammy Lohr was an athlete; Dawn was very frail, very small," he says. "I don't think that she could handle Tammy with a hand grenade and a machine gun."

Minnis was reluctant to consider the other obvious suspect: Patrick Bradford.

Fire investigator Jesse Storey had no such qualms. Firemen had the fire out about eight minutes after Patrick called for help. Storey says the damage in the room showed him that the fire burned less than 10 minutes, start to finish. Therefore, Patrick had to have set it or he could tell us who did because he would have had to have been standing beside him.

The scene had no murder weapon.

But crime scene investigator Mike Ford says the scene itself implicated Bradford. It looked at first like a break-in - a window screen was cut, phone wires were severed, circuit breakers in the basement were thrown. But it was all a ruse, Ford says. He notes that a sinkful of dirty dishes just below the cut window screen had been left undisturbed. He believes the screen was cut from inside the house.

He thinks Bradford staged the break-in to mislead investigators. James Lofton, a neighbor, happened to see Bradford drive up to Tammy's. Lofton was walking his dog and he did report that Bradford was upset after the fire.

But Lofton didn't see the smoke Patrick claimed he saw when he first drove up. Says Minnis: "Granted, Mr. Lofton was an old man. But still, he didn't smell smoke, he didn't see smoke."

Minnis still could not believe Bradford could kill, and so was thrilled to discover that a security camera at a nearby bank had been rolling when Bradford's car drove by, just 65 seconds before he called for help. "I thought that, you know there's no way, there was no way at that time that he could do all this stuff in 65 seconds," Minnis says.

But then some investigators came up with a new theory: what if Bradford murdered Tammy the night before? Bradford had iron-clad alibis for almost every minute during his patrol that night. But there was one quiet hour, when his only call to base was to report seeing one George Russell, a man who had frequent run-ins with the law, in a seedy part of town. Russell later would deny being there.

Asked about this, Bradford laughs: "Just the idea that a police officer who works the inner city would be dependent upon one of the people that he runs into, has arrested twice, suddenly be dependent on him for his alibi, it's just…"

If Bradford did murder Lohr during the night, detectives reasoned, then all he did in the morning was set the fire. So the question became, was 65 seconds enough time to do just that? Minnis did a timing test. It took him exactly 65 seconds.

What Happens? Part 2: The Trial, And The Experiment

Death by Text: The case against Michelle Carter

The Disappearance of Jennifer Dulos