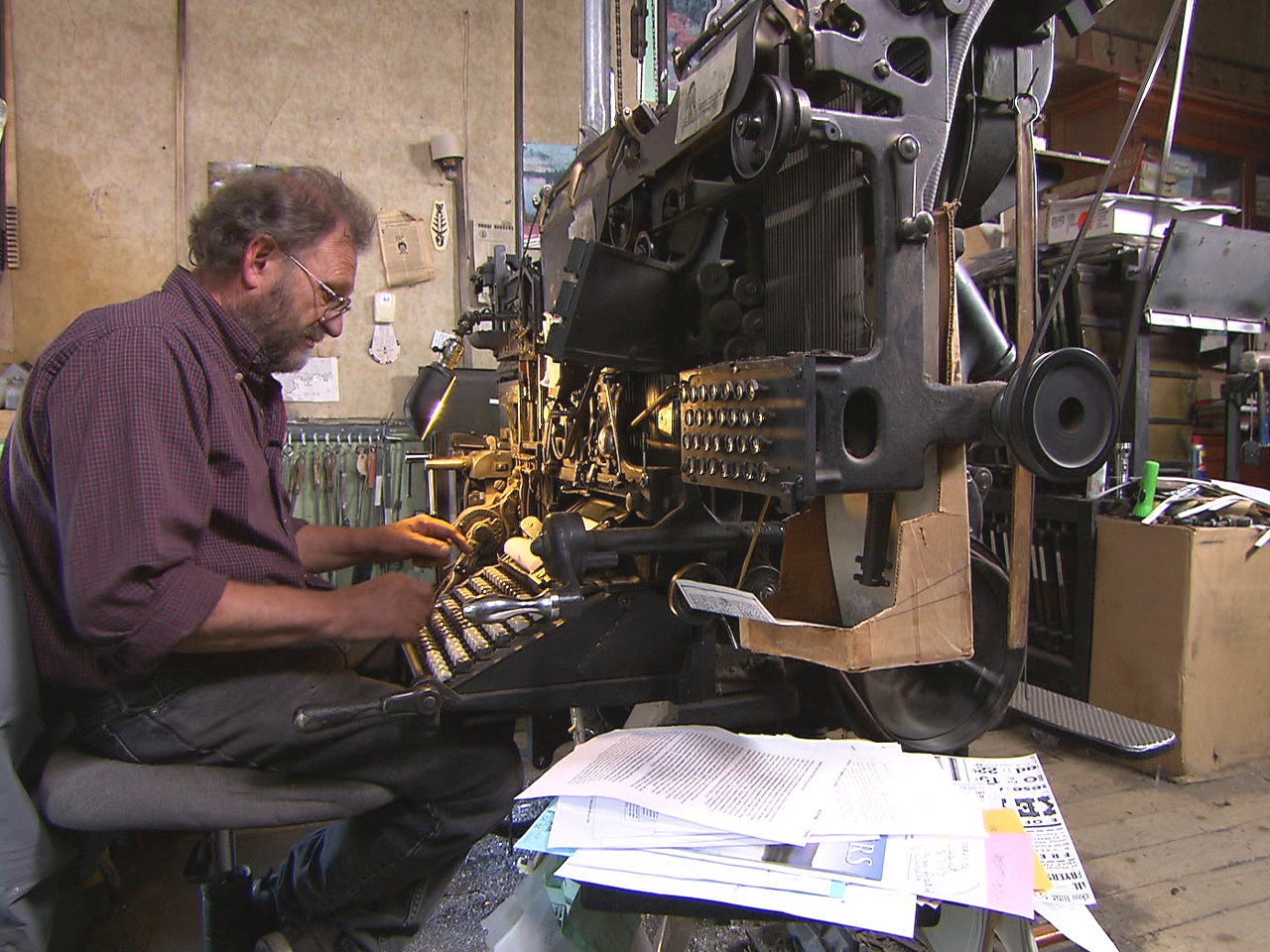 Even as modern-day technology keeps transforming the news business, one hearty journalist has embraced an old way of doing things that is just his type. Barry Petersen reports:

It is Tuesday in the tiny Colorado town of Saguache, and there is a kind of ballet going on . . . a ballet of man and machine.

Publisher Dean Coombs is feeding paper into a press, which methodically grabs it, rolls it across lines of type, lifts it, and turns it into the Saguache Crescent.

The press itself dates to about 1915 -- about as long as the Coombs family has been publishing the Crescent, every week, since 1917.  The same intricate choreography -- perfected and passed on, one generation to the next.

"They hooked my baby carriage to the back of that press," Coombs said. "The carriage would go back and forth," rocking him to sleep.

The newsroom is a virtual time machine, taking you back a century to a time when every big city daily used linotype machines to set copy, that massive presses turned into thousands of newspapers.

Now, computers do that work -- with one exception.

"I don't actually think there might even be another newspaper in the world" using linotype, Coombs said. "There are none on the United States."

When Petersen asked what was required to change fonts, Coombs explained:  "Well, we have to pull these two handles down, which turn into a ramp for it to come off."

"So on my computer, I click and it changes the fonts," said Petersen. "You have to pull this 60-pound thing off and put a new one in?"

"It's a lot easier on a computer."

"It's somewhat easier, uh-huh," Coombs said. "As long as your computer's working."

This linotype machine is a monster with 28,000 parts. Typing on the keyboard creates a line of type set in lead slug, and slugs become the columns of a newspaper.

Dean has bought other linotype machines, and stockpiles thousands of spare parts . . . and he knows where every part goes. He has no other choice. If the linotype machine breaks he's the repairman.

The Crescent will tell you about the quilters and the gardening club and auditions for a melodrama -- the heartbeat of a small town, population about 500.

Is the paper important to this town? "Oh yeah," said Coombs. "That's what the newspaper is supposed to really be doing, is supporting this community."

Take the item about the school’s spaghetti dinner. It was a fundraiser to help send students on a Florida trip to study marine life. But to Garret Boiles, it was so much more than just a community event.

"They got the word out and that's pretty good," said Boiles, who wants to become a marine biologist, "'cause then people can, like, help us."

After the paper is printed, the delivery man (that would be Dean Coombs, of course) takes them to the post office, to be shipped to Colorado Springs, Salida, the San Luis Valley.

Another batch heads for the Fourth Street Diner, so folks can catch up on what is, around here, breaking news -- like a story on Mary Morfett's 90th birthday, calling her "full of spunk," and adding that while she is short in stature, "Mary is long on pluck."

"Are you 'long on pluck'?" Petersen asked Morfett.

The paper has been keeping the town up-to-date since it was started in 1879, when Saguache was a place for prospectors to buy supplies.

And these days the Crescent’s editor -- yes, that's also Dean Coombs -- doesn't go hunting for news. He prints what people bring in, as long as all the news is good news.

"Actually, the Crescent has been referred to -- especially when my mom was editing it -- as 'the good news paper,'" Coombs said, and that's fine with him: "Everybody will find out about the bad things" in other places.

Dean has no children, so he's keeping an eye out for someone willing to edit, print, set type, repair machinery, make deliveries, and then be the janitor who sweeps the floor, to keep the Crescent going for the next generation.

"Probably the biggest drawback is that you've got to be committed to it," he told Petersen. "It's got to be your life. I always say I don't know anybody I dislike enough to give the Crescent to!"