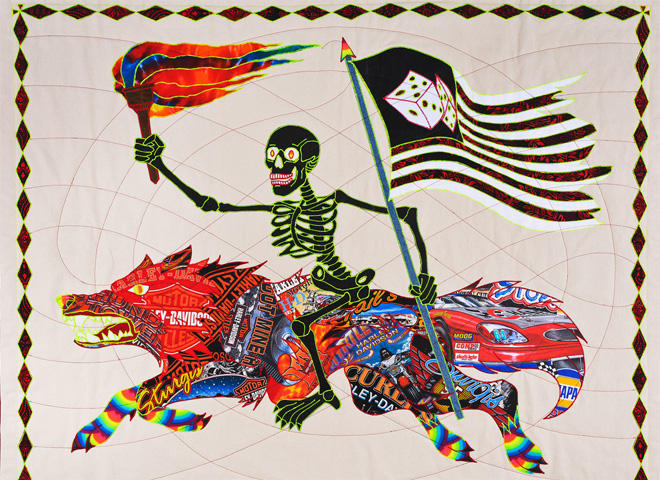 Faith Salie introduces us to the work of a music-loving artist on what you might call the FRINGE:

“I like this machine,” said quilter Ben Venom, “because once it gets going, I liken it to shooting a machine gun.  When it’s at full throttle, like R-R-R-R-R!”

Sit down with Venom in his studio in San Francisco’s Haight-Ashbury, and it doesn’t take long to realize he isn’t quite like other quilters.

“You know, I’ll listen to music or try to watch movies, but ultimately the noise of the machine kind of drowns a lot out. Because my head’s right in it. So pretty much my world is right around here.”

His world is filled with arresting images on quilts.

His quilts sell for thousands of dollars, have been exhibited around the world, and have names like Aces High and Iron Fist, which refers to a Motorhead song.

“I bleed. I have run over my fingers a couple times. It hurts!” said Venom.

“So your blood is actually in a quilt or two?” asked Salie.

“On one or two them, yeah. You can see it. It’s kind of my signature there!”

Ben Venom’s other signature? Using everything from donated women’s jeans and leather jackets to old rock T-shirts in his quilts. Merged into his work are bandanas, canvas, goat skin, bleached denim, and waterproof camouflage.

Where did the acid-washed jeans come from? “Some of them are donated,” he said, “and sometimes I’ll buy a big piece of denim and I’ll do it myself. Just like, I live in the Haight-Ashbury, the years of the tie-dye, but for me it’s the years of the ‘80s acid wash.”

The self-taught artist (whose real last name is Baumgartner) grew up listening to punk rock and heavy metal. But his life was changed forever when he went to see an exhibition of quilts.

“I saw the Gee’s Bend Quilt Show at the De Young Museum in 2006 here in San Francisco, and I was really blown away by their work -- these quilts by these women they’ve made for over centuries,” he said, “They used a lot of recycled fabrics.”

That show inspired Ben to take a pair of scissors into his closet to make his very first (and still, to this day, favorite) quilt. It includes a T-shirt for the band Testament. “I wore this Testament T-shirt for probably close to 15 years,” he said. “I mean, I wore it so much that it was so threadbare that you could see through it. And at that point I was like, ‘Ehhh, it’s not too metal to wear it out in public now.’ So I cut it up and put into that first quilt that I made in 2008.”

The quilt is named “Listen to Heavy Metal While You Sleep.”

Salie asked, “Are there mistakes in your work?”

“Oh gosh, yeah. All over the place,” he replied. “I’m not gonna point ‘em out to you, but oh, totally. Because sometimes I don’t really know how to sew this particular fabric, or how this should be folded, or whatever. So I just kind of, you know, do it, make my own way. But the fact that it’s handmade allows for those mistakes to kind of come through.”

As painter Bob Ross proclaimed, “We don’t make mistakes, we have happy accidents.”

Kind of a metaphor for life, right?  “I grew up watching Bob Ross on TV,” Ben said. “His big afro and the real weird, dark studio that he had, and always playing with the brushes. So yeah, that’s my upbringing!”

There is a whimsy is Ben Venom’s quilts. Is it intentional? “Oh, absolutely,” he said. “I totally, fully understand the level of absurdity that some of these pieces have, because it is pretty absurd that I do these quilts with strong, aggressive imagery. But yet the end result is a functional piece of fabric, right? That is a little absurd!”

The band Hazzard’s Cure donated shirts for him to quilt with, so he in turn invited them to a recent art talk -- and sewed patches on the jackets of fans while the band played.

“In a nutshell, I would say my art is a collision,” said Ben. “It’s a collision of fine art, crafting, and what I call the fringes of society. And that refers to, like, motorcycle clubs, punk rock, heavy metal, the occult, mysticism, folklore, paganism. I take all those and I collide ‘em together into one piece.

“And much like the large Hadron collider in Bern, Switzerland, where you’re shooting particles at each other at near-lightning speed, when you shoot opposites together, they hit, and new energy is released, and, like, a chain reaction happens.

“And I wanna live right there, riding that razor’s edge, that fine line when that new energy is released.”