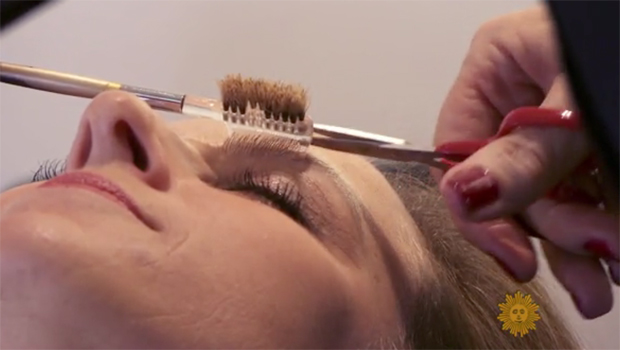 The eyes may have it... but let's not overlook what's over them. Faith Salie certainly hasn't.

On the court, Anthony Davis is hard to overlook . . . a 6'10" force, already an all-star for the New Orleans Pelicans in just his second year in the NBA. But for basketball fans, there's something else about him that's equally hard to miss . . . something that really catches the eye.

"It adds character, you know?" said one fan. "That's what everybody wants."

So silky smooth, Davis' brow sparked a sensation in 2012 at the University of Kentucky where he was the most popular player on the court . . . and off

"I went to Kentucky and everyone was like 'Bow to the brow,' 'The brow knows,' 'Fear the brow' and making it popular. And I was like, 'I can work with this.' Ever since then it's sort of blown up."

"It has its own identity."

"I never knew a unibrow could look so good!" Salie said.

"It's its own person," said Davis. "So I've gotta make sure it looks good, you know?"

Davis isn't the only person making sure his eyebrows look good. Whether plucking, waxing, threading, dyeing or drawing, Americans spend millions a year on their brows.

So why are eyebrows so important?

"They frame the face," said Robyn Cosio, a makeup artist who's shaped eyebrows for 25 years. "I think it's your whole expression. And if they don't look good, I feel that it changes the whole package of who you are."

Perfecting the brow has been an obsession for centuries. Two thousand years ago Egyptians used a black powder to paint dark, thick brows. For Greeks and Romans, the unibrow was in style. If a woman wasn't "blessed" with one, she would apply animal fur above her eyes.

In the Middle Ages, the brow was banished. "Queen Elizabeth I set the style," said Cosio. "They would shave their forehead and shave the eyebrow as well. You had to look like an egg."

The egg look got brow-beaten; by the twentieth century, Hollywood was dictating the styles, from the radically tweezed brows of Marlene Dietrich, to the "diva arches" of Lauren Bacall and Marilyn Monroe, to Sophia Loren, whose each and every eyebrow hair was painstakingly penciled in.

And then in the 1980s, Brooke Shields set a new standard, sporting a fuller, more natural look.

But no matter how carefully we groom our brows, we really can't control them.

"Most of what happens with the eyebrows, I would say, is unconscious, non-deliberate, unintentional," said Marianne LaFrance, a psychology professor at Yale who studies facial expressions.

"It's a way of establishing a contract, a social connection," said LaFrance, who studied Salie. "I mean, right now you did a little up-and-down really fast, 'cause you're attending. You are listening. You are, are you not?"

So what are some of the emotions that our eyebrows can express?

"One that really matters is sadness," said LaFrance. "And that's the expression when the inner corners of the eyebrows come up. Another is anger, when the whole brow comes down and in.

"Surprise, of course, is strongly suggested by both brows raised up and high in full force."

While eyebrows can broadcast our sincere feelings, LaFrance says they are also a built-in lie detector. People can fake a smile, but eyebrows tend to reveal what someone is really thinking.

"The eyebrows are basically the voice over the shoulder commenting on everything else that's going on on the face," she said. "It's the signal in the background that says, 'Take this seriously. Take this as a joke. Take this as something that is not meant at all truthfully.'"

And one MIT study yielded a brow-raising revelation: It's easier to recognize people by their eyebrows than their eyes.

Take these photos of President Richard Nixon (left). People had an easier time identifying him in a photo where his eyes were removed than when they saw him without his brows.

Whether thick or thin, arched or full, or even connected, it's clear that eyebrows tell the world who we are. And for some of us, that's worth, well, a lot. It's true for Anthony Davis: "I never thought about cutting it anymore," he said. "It's who I am."

"Could someone offer you a million dollars?" asked Salie.