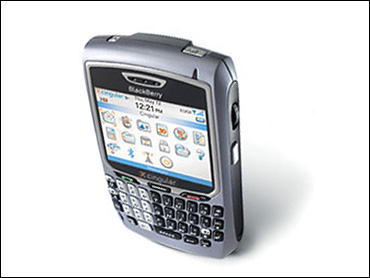 For the past few weeks I've been testing the new BlackBerry 8700c just to find out what all the fuss is about. Although I've tested several competing products from Palm and other companies, I hadn't used a BlackBerry in a couple of years but couldn't help notice that the Blackberry handheld personal organizer, cell phone and email device was becoming increasingly popular, especially among movers and shakers in the media, government and big business.

It's hard to attend a high-level meeting in Silicon Valley, Washington, New York or Hollywood without seeing at least one person pull out at a BlackBerry to quickly check and respond to messages. After testing out both the service and the new lighter, smaller and more colorful hardware, I can now understand why some people called it "crackberry." It is indeed addictive.

And like other addictive substances, there is a chance – though very slight -- that the law could deprive users of their fixes. At issue is not a "just say no" campaign but a lawsuit filed against Research In Motion Ltd. (RIM), the Canadian company behind the BlackBerry, by NTP Inc., which, though unlikely, could result in forcing RIM to stop its messaging services.

In addition to its legal and financial strategies (NTP has reportedly rejected a $450 million settlement offer), RIM says that it has already developed workaround software that will continue to deliver the mail, independent of any patent claims. My guess is that this will get worked out – there are too many players involved and too much money on the table to let the BlackBerry fail.

After two road trips with the BlackBerry this month, I certainly hope that's the case. The device I'm testing has had an amazing impact on my productivity when I'm away from my office, letting me receive and respond to e-mail anywhere, including from a plane, seconds after the flight attendant announces that it's OK to turn on wireless devices.

That was also true with the Palm Treo 650 I was using on earlier trips, but I not only find the BlackBerry's user interface more intuitive, I prefer the hardware as well. The keys are a little closer together than earlier Blackberrys but they're the same size as before and bigger than the keys on the Treo.

It's certainly a better phone than the Treo. In addition to being lighter and thinner although slightly wider than the Treo, it's easier to use where it counts. The key size makes me less error prone and the numeric keys for making calls are more prominent though still not as easy to punch as a standard cell phone.

The BlackBerry now has dedicated "send" and "end" keys, making it easier to place and end calls. One note of caution: because it is not a "flip" phone, it's easy to accidentally re-dial a number as I found out many times by dialing people by mistake. Fortunately, you can lock the keyboard – which I'm now doing before I put them device back in my pocket. As with any device without a built-in cover, a case or a holster is a good idea to protect the screen from being scratched by keys and other things in your pocket.

The 8700c has been available since November through Cingular Wireless and GSM carriers in other countries. Because it uses the GSM network, it can also be used in many other countries, though extra roaming charges will apply.

The device, which weighs 4.7 ounces and measures 4.3 by 2.7 by .77 inches is both smaller and lighter than any of its predecessors with QWERTY keyboards. Though the difference in size is slight, the impact is significant because it makes it easier to use with one hand.

It's also the first BlackBerry in the U.S. to use Cingular's EDGE network which provides higher-speed "broadband" connectivity at between 400 to 700 kilobits per second. Similar devices from Sprint and Verizon are also able to use those company's high-speed networks.

The high-speed network comes in handy when you use the Blackberry to view attachments such as Word or PDF files. This is the first Blackberry with an Intel processor. It also has 64 MB of flash memory and 16 MB of SRAM for storage and additional software. One impressive feature is its light-sensitive screen that adjusts the brightness, making it easy to view indoors and out.

There are BlackBerry e-mail solutions for both business and individual users. Many corporations and government agencies have the Blackberry integrated into their Microsoft Exchange application which gives them access to corporate email and, in some cases, internal instant messaging systems.

Like any cell phone, you can send SMS (text) messages to other phones. Because it has a QWERTY keyboard, that's a lot easier than a regular phone.

The BlackBerry, of course, has a browser that you can use to access the web. While it's easier and better than browsing from a cell phone, most web sites are still not optimized for handheld devices so the experience will be mixed.

If you're looking for an MP3 music player or a camera phone, keep looking. While the BlackBerry can play some games, it purposefully remains a business tool, not a multimedia all-purpose device.

When I checked, Cingular Wireless was selling the BlackBerry 8700c for $299 with a 2-year contract for monthly service. In addition to your basic voice services, you'll have to pay additional fees for data services.


A syndicated technology columnist for over two decades, Larry Magid serves as on air Technology Analyst for CBS Radio News. His technology reports can be heard several times a week on the CBS Radio Network. Magid is the author of several books including "The Little PC Book."
By Larry Magid