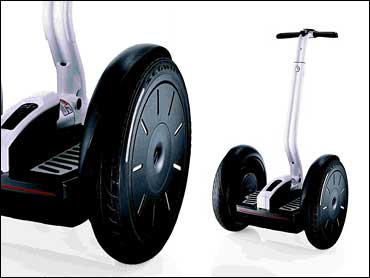 Paul Feeney didn't commute with the Segway his parents gave him for Christmas in 2005 until he moved close to work this spring. The battery-powered, energy-efficient scooter makes the 1.4-mile commute fun, the 35-year-old Sun Microsystems sales representative said.

It also made his commute a lot less expensive.

When the Segway Personal Transporter came out in 2001, inventor Dean Kamen said the self-balancing vehicles would revolutionize short-distance travel. At first, however, they appealed mostly to police, mall security crews and airport personnel.

"Anything that seems to be economical on fuel or doesn't use fuel at all, people are definitely researching and buying," Sermarini said.

Jared Cavalier, the Columbus Segway dealer who sold Feeney his scooter, said the increased interest has allowed him to open stores in Toledo and Cincinnati this year.

"These last few months have been fantastic," Cavalier said. "We unbox them and they go out the door the same week."

The self-balancing, standup scooters are getting more attention all around. Two "catcalls" are the most popular, Feeney said.

The Segway's $5,000 price tag and its geekiness - they were among many targets of Weird Al Yankovic's parody "White & Nerdy" in 2006 - are probably the biggest limits on its popularity, Feeney said.

James Houchard, an early customer in Ohio who now owns three Segways with his wife, said he tells people who stop him that he sees no difference in his electric bill.

"People always (wanted) to know how they work and what they do, but now I've had people ask about gas and say, 'Is that a lot cheaper?'" said Houchard.

Houchard, 56, said they like the energy savings, but when he mentions what the scooters cost, it's usually a surprise.

"Five-thousand dollars is an issue," Bedford, N.H.-based Segway Inc. president and CEO Jim Norrod acknowledged - though he predicted recent years' sales growth rate of 40 percent to 50 percent to continue in 2008.

Dealers have seen a further uptick of 30 percent to 40 percent in walk-in traffic in the past month as people look for antidotes to expensive gasoline, according to Carol Valianti, a spokeswoman for Segway Inc.

The privately held company does not release sales data.

For now, the energy savings seem to be Segway's strongest selling point.

Since buying a Segway in April, Kalispell, Mont., resident John O'Connor estimates, he has saved at least $100 on gas for commuting.

Enough charge to make the four-mile round trip to his job with telecommunications provider CenturyTel costs 4 cents, he said.

"Gas prices are going up, and it just turns my stomach. So I thought, 'I'm done - I'm not going to do it anymore,'" said O'Connor, 53. He and his wife are selling one of their automobiles.

Segways don't completely cure the pain at pump. They need a charge after about 25 miles, can't protect riders from the elements or carry much cargo and have a top speed of 12.5 mph.

"I could probably ride 10 minutes in 10-below-zero weather and not get so cold that I couldn't stand it. If the trip was a lot longer, I probably wouldn't want to do it," said O'Connor.

Richard Doherty, an analyst with the Envisioneering Group research firm who has followed the Segway market for several years, said interest started rising in California when gas hit $4 a gallon there early this year.

"When SUV owners start driving slowly to save precious drops of gas, using a Segway looks more and more appealing - especially for middle-of-the-day and weekend trips near home," said Doherty.

The vehicle's price is coming into range, said Doherty.

"They're saying that a Segway now costs about what you'd pay for the annual maintenance on many car models," he said. "It just makes sense, if it's fair weather and you can make your trips by Segway."