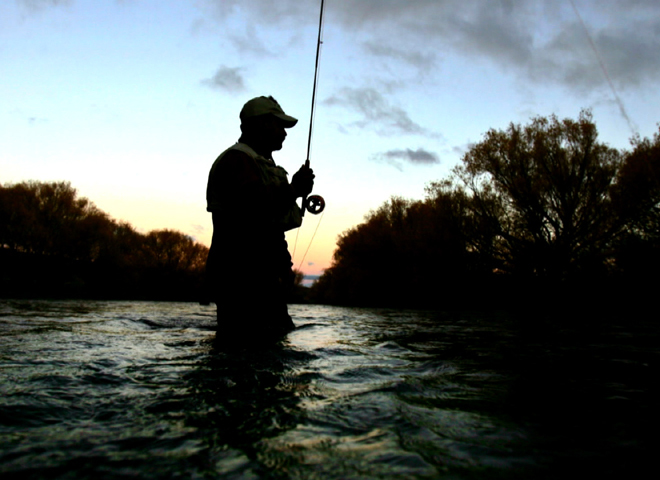 (CBS News) Not every summer time activity involves activity. There's one male pastime that has baffled women since the beginning of time - count our contributor Faith Salie among them:

True story: I've gone fishing only once. It was on the Amazon, and I was trying to catch piranha. I didn't catch any, and I didn't get hooked on fishing.

Maybe it's because I'm a woman. Sure, there are ladies who like to fish, but it's mostly men wading in rivers, leaning over bridges and boats, angling for the nibble that delivers every fisherman's desire: "tight lines."

Why do dudes love fishing? I went trawling for answers.

Many guys tell me that fishing satisfies a primal hunting urge. It's man vs. nature, armed with only a pole, beer and sunscreen. They think, "I just caught my own dinner (if my wife will de-bone it for me)."

And if you consider fishing a sport - and some do - then it's a very democratic kind of activity. You don't need to be a tall or strong or agile. You just need to be patient, or drunk . . . on the beauty of nature. As avid fisher President Herbert Hoover put it, "All men are equal before fish."

Also, fishing is a pretty good excuse not to do much, which is really what summer should be about.

Scientific studies have proven that women multitask better than men, so fishing is a great way for men to flex their strength at mono-tasking. Standing there with just a rod and a wish is something at which men can really excel!

One man explained fishing as extended periods of boredom punctuated with brief bouts of excitement - which to me describes dating. You put your bait out there; you see what bites; you catch and release, and trust there are OTHER fish in the sea.

Other guys think of fishing as meaningful bonding time with fathers, grandfathers and sons. A friend of mine described his time with his dad as a childhood adventure. The "adventure" was baloney sandwiches in the hot, humid bayou in a tiny boat, and very little fish-catching. Conversation rarely got deep, but it was intimate time shared.

Now there's a reason to fish that I'll buy hook, line and sinker.

Most men probably don't analyze why they love fishing. Why think too hard about a simple pleasure? But it's kind of a metaphor for a good life: Try your best, hope for the best, have days when you catch something and days when you don't, but always, always be thankful for the sound of the water and the sun in the sky and the chance to cast another reel.

It's been said, "Some men fish their entire lives without realizing it's not fish they're after."

So, gentlemen, whatever you're after this summer, have fun . . . and tight lines!

Penélope Cruz: Mother, actress, and student of life
Thanks for reading CBS NEWS.
Create your free account or log in
for more features.
View CBS News In
CBS News App Open
Chrome Safari Continue
Be the first to know
Get browser notifications for breaking news, live events, and exclusive reporting.