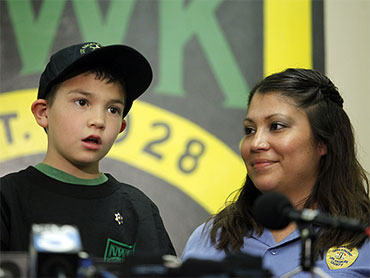 What ended on a happy note for a California family started out as an almost "unbearable" ordeal for a sheriff's dispatcher.

When a 7-year-old boy, identified as Carlos, called 911 from a locked bathroom as armed robbers held his parents at gunpoint, sheriff's dispatcher Monique Patino fielded the call.

"I felt the fear in his voice, both of them," Patino told CBS' "The Early Show" Thursday, referring also to Carlos' 6-year-old sister, who he had pulled into the bathroom with him.

"There's some guy. He's gonna kill my mom and dad. Can you come?" Carlos said over the phone, even imploring Patino to "bring soldiers, too!"

Patino said she felt terror at the sound of the 7-year-old's voice.

"I'm shaky, I'm nervous. I'm scared," Patino recalled. "I'm more scared for them and it was a little unbearable."

Even though the intruders broke down the bathroom door, to the terrifying screams of the children, they fled once they learned Carlos had called 911. On Wednesday, Patino and Carlos got to meet.

"I said he was very brave and I'm very proud of what he did," Patino said, occasionally dabbing tears from her cheek.

The boy told reporters at a news conference that he remained calm during the ordeal because his mother used to make him practice dialing 911 in case of emergencies.

How did his mother say he did?

Captain Patrick Maxwell, of the Los Angeles County Sheriff's Office, told "The Early Show" that Carlos did "a fantastic job … better than most adults." He added that the episode offers a valuable lesson for parents.

"We'd really like parents out there to have this as a learning experience to teach your children how to use 911."

Maxwell said police are still searching for the three suspects and are trying to determine the motive.

Maxwell said the 6-year-old girl had left the front door open after running to the family's car to grab her lunch box. The assailants burst in soon after.

Carlos' parents declined to appear at the news conference and were "still pretty traumatized" by events, Maxwell said.

Deputies were on scene within three minutes, but the assailants had escaped in a green or gray two-door compact car, Los Angeles County Sheriff's Sgt. Douglas Jensen said.

"When one of the cops cars came, they just ran," Carlos told reporters.