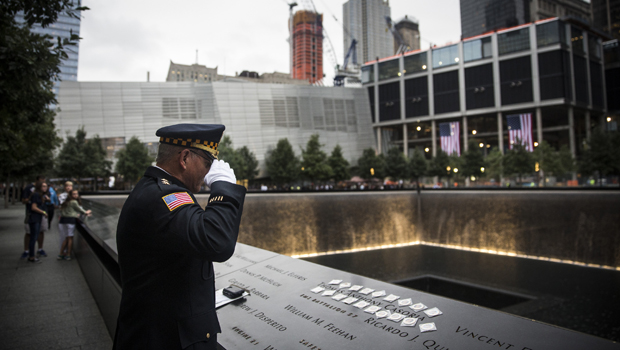 NEW YORK - From a moment of silence to the tolling of bells and the solemn reading of victims' names, the nation paused Thursday to mark the thirteenth anniversary of the Sept. 11, 2001, terror attacks.

The private anniversary ceremony is being held at the National Sept. 11 Memorial & Museum plaza on Thursday morning. The tribute has centered on reading the names of the nearly 3,000 people killed in New York, at the Pentagon and near Shanksville, Pa., as well as recognizing the six people killed in the 1993 World Trade Center bombing.

For the first time, the National Sept. 11 Memorial Museum in Lower Manhattan -- which includes gut-wrenching artifacts and graphic photos of the attacks -- will be open on the anniversary. Fences around the memorial plaza have come down, integrating the sacred site more fully with the streets of Manhattan while completely opening it up to the public and camera-wielding tourists. Above, a nearly-completed One World Trade Center has risen 1,776 feet above ground zero, expected to be filled with office workers by this date in 2015.

Franklin Murray of New York wore a shirt with a photo of his brother, Harry Glen, and the words "our angel" above the photo and "the wind beneath our wings" below. Glen worked at Cantor Fitzgerald, one of the companies most decimated.


He said he wanted to see the memorial for the first time, and it gave him a "funny feeling" to know there was now a memorial. He has come to the ceremony before but "before it was getting harder, so I forced myself to get down here."

"Coming down to the area is rough," he said.

At nearby St. Paul's Chapel worshippers gathered to reflect and honor the dead.


Mona Bhow of New York goes to the church every year on 9/11. Bhow said tearfully that the anniversary "brings back horrible memories."

She lost a college friend in the attacks.

Doug Pahl of Portland, Ore., came with his son, Jackson. The attorney was in New York City for meetings. But they went straight from the airport to Lower Manhattan to commemorate the moment of the attack.

Pahl said it made the anniversary "more real" and "poignant." He says the sea of uniforms in the area made it feel like a military funeral.

For some who lost loved ones in the attacks, the increasing feel of a return to normalcy in the area threatens to obscure the tragedy that took place there and interfere with their grief.

"Instead of a quiet place of reflection, it's where kids are running around," said Nancy Nee, whose firefighter brother, George Cain, was killed in the attacks. "Some people forget this is a cemetery. I would never go to the Holocaust museum and take a selfie."


But for others, the changes are an important part of the healing process.

"When I first saw (One World Trade Center), it really made my heart sing," said Debra Burlingame, whose brother Charles Burlingame was the pilot of the plane that crashed into the Pentagon. "It does every time I see it because it's so symbolic of what the country went through."

The memorial plaza will be closed to the public for most of the day and available only to family members. It will reopen at 6 p.m., at which point thousands of New Yorkers are expected to mark the anniversary at the twin reflecting pools where the towers once stood.

The first ceremony at the site was held six months after the Twin Towers fell and was organized by then-Mayor Michael Bloomberg and his aides. Bloomberg, who took office just three months after the attacks, remained in charge, acting as the master of ceremonies for the next decade.

After other elected officials attempted to gain a larger role at the solemn event, in 2012, all politicians -- including Bloomberg -- were prohibited from speaking at the event. That remains the case now, as New York Mayor Bill de Blasio, who took office in January, agreed to let the National September 11 Memorial & Museum at the World Trade Center Foundation organize the commemoration ceremony. Bloomberg is the foundation's chairman.

A few minutes before 9 a.m. EDT Thursday, President Obama emerged from the White House with his wife, Michelle, and Vice President Joe Biden to observe a moment of silence marking the 13th anniversary of the terror attacks.

Scores of White House staff joined the Obamas and Biden for the solemn moments under partly cloudy skies on the South Lawn of the White House.

They heard the playing of "Taps" there before returning to the Executive Mansion for a short time, before heading to the Pentagon for a private service there for families of Defense Department personnel killed in the attack.

At the Pentagon, Mr. Obama spoke to family members of those killed.


"As Americans, we draw strength from you. For your love is the ultimate rebuke to the hatred of those who attacked us that bright blue morning. They sought to do more than bring down buildings or murder our people. They sought to break our spirit and to prove to the world that their power to destroy was greater than our power to persevere and to build. But you and America proved them wrong.

"We carry on because, as Americans, we do not give in to fear -- ever."

Former House Speaker Dennis Hastert donated the flag that flew atop the U.S. Capitol on 9/11 to the Flight 93 National Memorial in Pennsylvania.

At a ceremony in Shanskville on Thursday, Hastert said the Capitol may not have remained standing 13 years ago if the United Airlines passengers and crew had not rebelled against four hijackers. The plane went down in a field in southwestern Pennsylvania, killing 33 passengers and seven crew members.

Hastert was Speaker of the House on Sept. 11, 2001. He said the donated flag has smoke smudges from the fire caused by another hijacked plane crashing into the Pentagon that same morning.

Hundreds of family members, dignitaries, officials and spectators attended the commemoration in Shanksville.

A Congressional Gold Medal awarded to those who died at the site of the memorial will be presented Thursday as part of the ceremony. Bells were rung, and the names of the victims were read beginning at 10:03 a.m., the moment the airliner crashed as passengers fought with hijackers for control of the jet.

Thursday's ceremony also comes as the National Park Service marks progress on a $17 million to $23 million phase of the project that includes a visitors' center and a learning center, which officials hope will boost the number of annual visitors to the memorial from 300,000 to more than 500,000.

"We have to make sure there will be a place to come in the future to learn about what happened," Gordon Felt said just after dawn Thursday, near the tent where the memorial ceremony was to take place. Felt's brother, Edward, was among the passengers killed.

The Congressional Medal will be on display at the memorial through Sunday. It will go on permanent display once the visitor's center opens, hopefully for the 14th anniversary. The same medals are being awarded at the World Trade Center and Pentagon sites, which were also ravaged by al Qaeda-hijacked airliners that morning.

Rachel Stingis, 30, of Belle Vernon, was among the first spectators to arrive. Stingis had visited the site before the memorial was built, but never attended an anniversary ceremony. She said she was in high school at the time of the attacks and watched the coverage on television in class.

"Being a senior ready to start college I thought it was the end of the world," she said.

Flight 93 was traveling from Newark, New Jersey, to San Francisco when four hijackers took control, with the likely goal of crashing it into the White House or Capitol. The 9/11 Commission concluded that the hijackers downed the plane as the 33 passengers and seven crew aboard the plant revolted.

A Memorial Plaza near the crash site consists of a white stone wall that traces the doomed plane's flight path, with each victim's name engraved on a separate panel. There are plans for a 93-foot-tall tower with 40 wind chimes.

While the memorial is a lasting legacy to those who died, Felt said it's also important for the families of those involved to gather at the site each anniversary.

"It really brings a sense of comfort to come together with other people who have suffered the same loss," Felt said. "It's difficult each year to reopen that wound, but at the same time it's important to remember."

In Massachusetts (where two jetliners that struck the World Trade Center towers had departed from Boston's Logan International Airport), a wreath-laying ceremony was held at a memorial to victims in Boston's Public Garden.

Mayor Martin Walsh said at the ceremony that his girlfriend's cousin died in the attacks.

At a Statehouse ceremony later, the names of the more than 200 people with ties to Massachusetts who died in the attacks were read aloud.

A civilian bravery award named for Madeline Amy Sweeney, a flight attendant on American Airlines Flight 11, will also be presented at the Statehouse.

Other commemorations are planned at the USS Constitution.

New Jersey -- home to nearly 750 of the victims -- will hold wreath-laying ceremonies, interfaith services and other events aimed at honoring those killed. Many towns are planning events that emphasize the spirit of volunteerism and community participation that came about in the days following the 2001 attacks.

In Mesa, Ariz., as part of a Patriot Day and National Day of Service and Remembrance project, volunteers organized by Americorps Vista and HandsOn Greater Phoenix will be painting the house of a veteran needing assistance.

In Illinois, members of the College Republicans at Bradley University in Peoria planned to put up about 3,000 flags in memory of the victims in front of Bradley Hall.

In Cleveland, former President George W. Bush will be the keynote speaker at a college scholarship luncheon sponsored by the Cuyahoga Community College Foundation. The annual event has raised more than $11 million since 1992. Proceeds from this year's luncheon will benefit veterans' programs as well as fund scholarships.