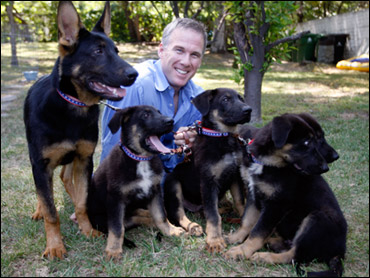 Scientists say they have cloned a German shepherd that helped with search-and-rescue after the Sept. 11 terrorist attacks.

The five puppy clones of the dog, Trakr, were delivered to owner and former Halifax, Nova Scotia police officer James Symington and his wife, who now live in Los Angeles.

Bell reported Trakr saved many lives over his long career, but became part of history after he helped find the last remaining survivor in the World Trade Center rubble.

And last year, Trakr's owners entered the 16-year-old dog into a contest, sponsored by the California company BioArts International, which promised to clone a dog for free.

"We expected that the winner would be an exceptional pet. Maybe he would have rescued Timmy from a well," said Lou Hawthorne, chief executive officer of BioArts, "but we didn't think it would be anything of the historical significance that Trakr played. ... That blew us away."

The goal was to create one clone, Bell reported, but five genetically identical puppies resulted from the surrogate dog pregnancies.

Trakr died two months ago. But Symington, Bell said, is looking at dog's cloning as continuing a legacy -- not holding onto the past.

"Trakr was so much a part of my life, and, you know, he was more than just my partner," Symington said. "He was my best friend and my lifelong companion. And seeing and having his legacy live on in these puppies is a tremendous gift."