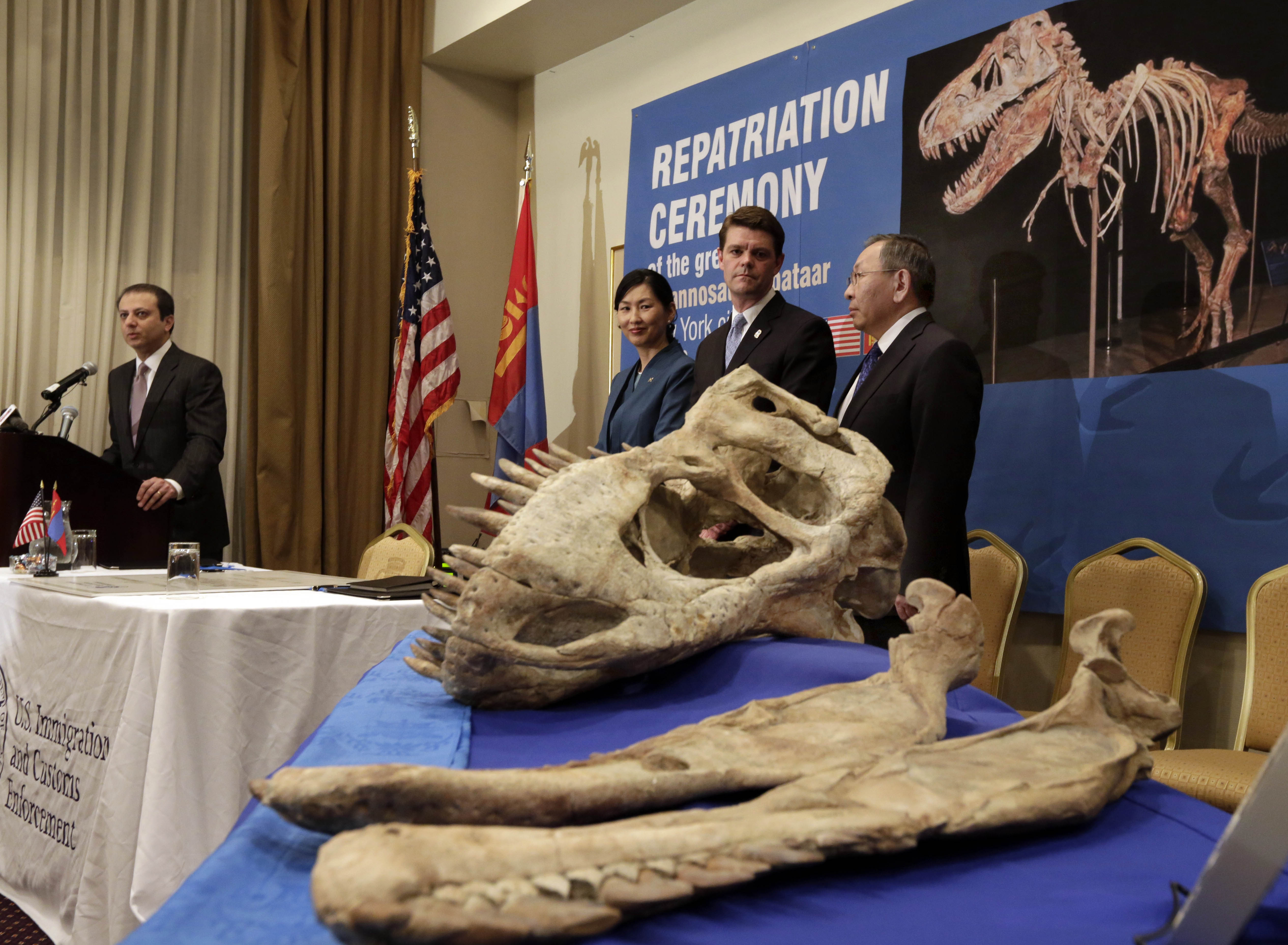 NEW YORK -- U.S. officials on Thursday turned over to the Mongolian government enough 80-million-year-old dinosaur skeletons to stock a museum, including two relics of a kind of dinosaur that a prosecutor said "memorably stampeded" in a Hollywood movie.

U.S. Attorney Preet Bharara said the fossilized remains of more than 18 dinosaurs recovered by federal authorities were transferred after a ceremony attended by Mongolia's ambassador to the United Nations.

"This is a historic event for the U.S. attorney's office, in addition to being a pre-historic event," Bharara quipped at the gathering.

James T. Hayes, special agent in charge of the New York office of Homeland Security Investigations, said at least 31 fossilized dinosaur remains will eventually be returned to Mongolian authorities, after it was determined that they were illegally poached and smuggled out of the east-central Asian country between 2005 and 2012.

Hayes said the effort to intercept illegal shipments of dinosaur bones shows the U.S. "will not allow the illicit greed of some to trump the cultural history of an entire nation."

He said the bones will be displayed at a national museum in Mongolia because they "do not belong in the hands of any private collection or one owner."

The bones were recovered after U.S. Immigration and Customs Enforcement agents discovered illegal shipments of mislabeled bones were being made into the United States.

Hayes said Eric Prokopi, a commercial paleontologist from Williamsburg, Virginia, who pleaded guilty to federal charges, had disassembled some chunks of bones from a Tyrannosaurus bataar skeleton to sneak them into the country, knowing he could easily put them together. Once assembled, the skeleton was sold at auction for more than a million dollars before federal authorities seized it and returned it to Mongolia last year.

Prokopi, 39, who cooperated extensively and was described in heroic terms at his sentencing for alerting authorities to many skeletons they did not know about, was ordered at a Manhattan court proceeding last month to serve three months in prison.

Bharara said the dinosaurs returned to Mongolia on Thursday included two Tyrannosaurus bataar skeletons, a dinosaur egg and two skeletons of Gallimimus, "the dinosaurs that memorably stampeded in one scene" of the movie "Jurassic Park."

The prosecutor said the people of Mongolia can now restore and display the relics "as symbols of their status as a star within the paleontological firmament and astonishing symbols of Mongolian national pride."

Also present at the repatriation ceremony was Mark A. Norell, curator-in-charge of the American Museum of Natural History's Division of Paleontology.

He called the collection of dinosaurs "an incredible rarity."

Among the fossils on display were several from the Cretaceous period in a piece titled "Graveyard of the Oviraptors," a reference to a kind of dinosaur suspected of eating the eggs of other dinosaurs.

"They all met a common demise, not at the hands of smugglers, but at the hand of mother nature," Bharara said.