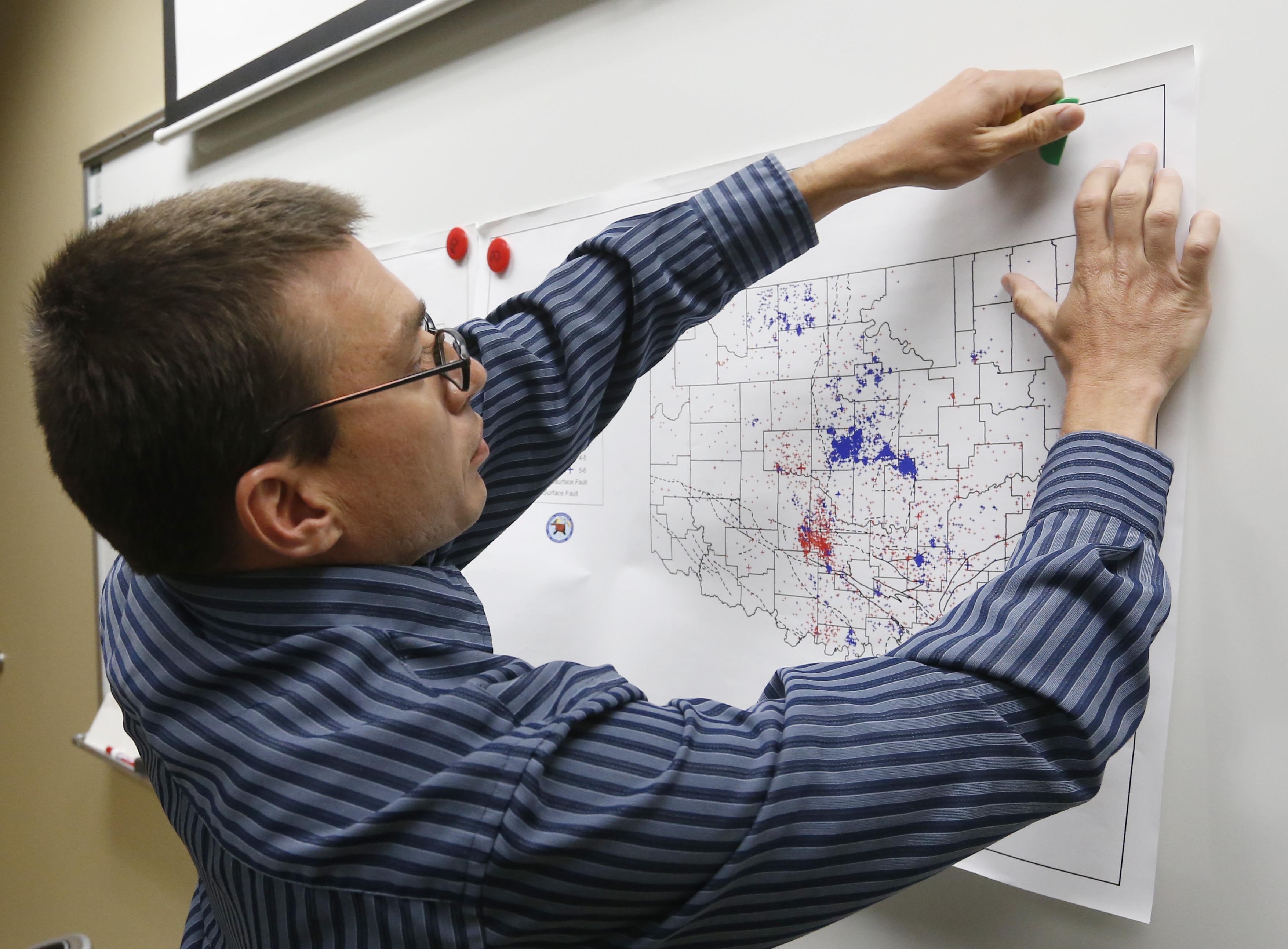 GUTHRIE, Okla. -- The U.S. Geological Survey has recorded eight small earthquakes shaking central Oklahoma in a span of about 30 hours.

The temblors are part of an increase in earthquakes across Oklahoma, Texas and Kansas that some scientists say could be connected to the oil and gas drilling method known as hydraulic fracturing, or fracking, and especially the wells in which the industry disposes of its wastewater.

On Monday morning, no damage or injuries were reported after a 3.9 magnitude earthquake struck northern Oklahoma. The U.S. Geological Survey says the earthquake was recorded at 2:15 a.m. about 10 miles southwest of Medford and 21 miles north of Enid. The quake was about 4.8 miles deep.

Sunday's quakes ranged from magnitude 2.6 to 2.9 and were centered in the Guthrie, Jones and Langston areas, 15 miles to 30 miles northeast of Oklahoma City. The USGS said the quakes were recorded between 7:57 p.m. Saturday and 9:51 a.m. Sunday. No injuries or damage were reported.

Those follow four other quakes, including a 4.3-magnitude temblor near Langston recorded shortly after noon Saturday. The other Saturday morning quakes ranged in magnitude from 2.9 to 3.2.

Last month, CBS News toured the Oklahoma home of Magee and his wife Lisa Liebl. During the visit, a 3.8-magnitude earthquake struck 10 miles away.

"My gut is just spot on that its fracking and injection wells that the oil and gas companies are doing around the area," Liebl said.

In a statement, oil and gas advocacy group Energy in Depth told CBS News, "The best science available to us right now suggests strongly that fracking has nothing at all to do with these small seismic events."

Seismologists know that hydraulic fracturing, or fracking - which involves blasting water, sand and chemicals deep into underground rock formations to free oil and gas - can cause microquakes that are rarely strong enough to register on monitoring equipment.

However, fracking also generates vast amounts of wastewater, which is pumped into injection wells thousands of feet underground. Scientists wonder whether they could trigger quakes by increasing underground pressures and lubricating faults. Another concern is whether injection well operators could be pumping either too much water into the ground or pumping it at exceedingly high pressures.

Hundreds of central Oklahoma residents met with regulators and research geologists last month in Edmond, and many urged regulators to ban or severely restrict the disposal wells.

Austin Holland, a research seismologist with the Oklahoma Geological Survey, said at the time that the state is experiencing unprecedented earthquake activity and his agency is closely monitoring it to determine whether the earthquakes are a natural phenomenon or are man-made.

Holland also said the same drilling methods have been used in the state for years but that frequent earthquakes did not become a problem until after 2009.