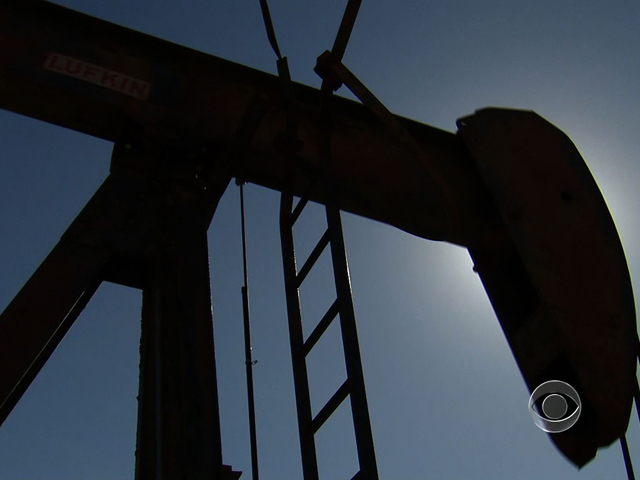 Fracking is short for "hydraulic fracturing," and the catch-all term used to describe the process of extracting oil and natural gas from shale rock formations deep underground. The process goes roughly like this: A company drills down more than a mile deep into the shale rock formations. Then comes what is known as "horizontal drilling" - effectively, the drilling turns 90 degrees, so that the well is exposed to more rock than it would be otherwise.

After the well is reinforced with concrete, tubes with perforating guns are sent down to set off explosions that create perforations in the rock surrounding the well. Then millions of gallons of "fracking fluid" - a mixture of water, sand and chemicals - is pumped down into the well at high pressure. The pressure builds up in the well, and the rock fractures. That frees the oil and gas that had been trapped within the rock, which flows back up through the pipe to be captured above ground. The process is repeated multiple times, with much - though not all - of the fracking fluid brought back up through the well.

Fracking and the boom

Fracking has been going on for more than half a century, but it has exploded in the last five years. That's because of technological advances, including horizontal drilling, and the discovery that there is far more gas in shale formations like the Marcellus Shale than previously thought. In 2007, Penn State Professor Terry Engelder calculated that there were 50 trillion cubic feet of natural gas in the Marcellus Shale, which runs for about 95,000 miles underneath Pennsylvania, New York and four other states. The U.S.Geological Survey had previously estimated the shale held just 2 trillion cubic feet.

Engelder's discovery and others around the country revealed that America's shale held "the equivalent of two Saudi Arabias of oil," as the CEO of Chesapeake Energy Aubrey McClendon put it.

Fracking has transformed communities - in ways both good and bad - across the country, sometimes turning residents who sell their land rights into millionaires - or "shaleionares," as they've come to be known. For struggling towns Midwestern like Youngstown, Ohio, which saw their fortunes fall with the decline of the steel industry, fracking also represents an economic lifeline.

The realization that American had previously unknown vast oil and gas reserves has had a transformative effect on the American energy economy. It means that the United States can become less reliant on foreign energy sources, and, proponents say, potentially energy independent in the future. (By some estimates, there is enough natural gas deep underground to last for a century.) The oil and gas that is freed using fracking can be used to power cars, heat homes and provide electricity to hundreds of millions of people. And natural gas is relatively cheap and burns cleaner than coal.

As of December, there were 36,000 fracking wells in this United States, with thousands more set to open in 2013. The price of natural gas, meanwhile, has dropped by 33 percent since 2006, and the United States is beginning to export it for the first time.

Environmentalists and some scientists have pointed to a whole host of environmental risks tied to fracking. They include the potential for drinking water to be contaminated if fracking fluid or the natural gas and other chemicals that had been trapped in the shale migrates up through rock and into aquifers or water wells. The Environmental Protection Agency said in a 2011 report, which has remained in draft form amid controversy, that chemicals from fracking were present in well water in Wyoming.

Other risks include those to air quality from burning off excess natural gas into the air and potentially negative impacts to wildlife and the environment from the clearing of land. There are also complications related to the disposal of the fluid that is a byproduct of the fracking process, which is believed to have caused earthquakes near Youngstown when pumped back underground and poses additional risks to drinking water.

Different states have taken different approaches when it comes to regulating fracking. Pennsylvania has been among the most willing to allow oil and gas companies to drill, while New York has had a moratorium on fracking that may be lifted in February. Last year, Vermont became the first state to ban fracking; California, meanwhile, is now poised to be the next state to see a fracking boom; lawmakers in the state, which currently does not require fracking companies to disclose the contents of their fracking fluid, are set to hold a hearing to examine fracking regulations in February.

Barring a massive environmental catastrophe, the fracking industry is expected to continue growing at a rapid pace. Environmentalists have complained that Obama administration has largely allowed the industry to operate with impunity; The Republican Governors Association and the Republican Attorneys General Association complained in a letter to the president in December that the Interior Department should abandon a draft plan to require drillers on federal and Indian lands to disclose the contents of fracking fluid.

In 2014, the Environmental Protection Agency plans to release the first comprehensive national study on the possible pollution of drinking water from fracking in 2014. While we don't yet know what will be in that report, it's almost certain that the fierce battle between environmentalists and industry over allowing and regulating fracking will continue long after it is released.