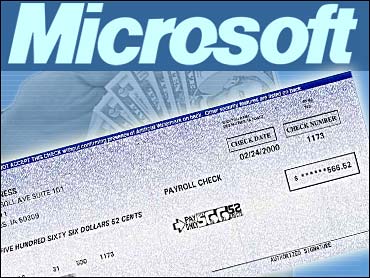 A Colorado man once accused of being one of the world's top three spammers has agreed to pay $7 million in a settlement with Microsoft Corp., the software maker announced Tuesday.

The money from Scott Richter and his company, OptInRealBig.com of Westminster, Colo., will be used to boost efforts to combat the illegal sending of unsolicited and misleading e-mail known as spam and other computer misuse, said Microsoft's chief counsel, Brad Smith, in a news release issued Tuesday morning.

"This settlement is a victory for consumers who rely on the Internet because it also means fewer unwanted e-mails in your inbox," Smith said.

"After covering our legal expenses for the case, Microsoft will then reinvest every penny from this settlement," he said. "We'll dedicate $5 million to increase our Internet enforcement efforts and expand technical and investigative support to help law enforcement address computer-related crimes."

Besides spending that money to enhance Internet safety partnerships with governments worldwide through training, technological development and investigative assistance, the company pledged $1 million to expand computer access for the poor at community centers in New York state.

The settlement is conditional upon dismissal of bankruptcy petitions Richter and his 4-year-old company have pending in U.S. Bankruptcy Court in Denver, and they were expected to file the required motions Tuesday, according to the company's statement.

He and his affiliated businesses also agreed to comply with federal and state laws, including CAN-SPAM, the federal Controlling the Assault of Non-Solicited Pornography and Marketing Act, and will not send spam to anyone who has not confirmed a willingness to receive it.

Another provision calls for three years of oversight of Richter's operations.

The agreement is the second involving litigation brought by Microsoft in King County Superior Court in Seattle and by New York Attorney General Elliott Spitzer in New York Supreme Court in Manhattan seeking as much as $20 million in fines in December 2003.

"Spam traps" set by Microsoft the previous May and June netted 8,000 messages containing 40,000 fraudulent statements, Spitzer said at the time, describing Richter as one of the three biggest spammers in the world.

In a settlement announced July 19, Richter and OptInRealBig.com agreed to pay New York State $50,000 in penalties and investigative costs, to provide Spitzer's office with customer information and all advertisements it sends and to use proper identifying information when registering Internet domain names.

Richter, who was removed last month from the Register of Known Spam Operators maintained by the Spamhaus Project, an anti-spam and consumer advocacy group, did not admit wrongdoing in the Microsoft news release but said he had changed the way he does business.

"In response to Microsoft's and the New York attorney general's lawsuits, we made significant changes to OptInRealBig.com's e-mailing practices and have paid a heavy price," he said. "I am committed to sending e-mail only to those who have requested it and to complying fully with all federal and state anti-spam laws."