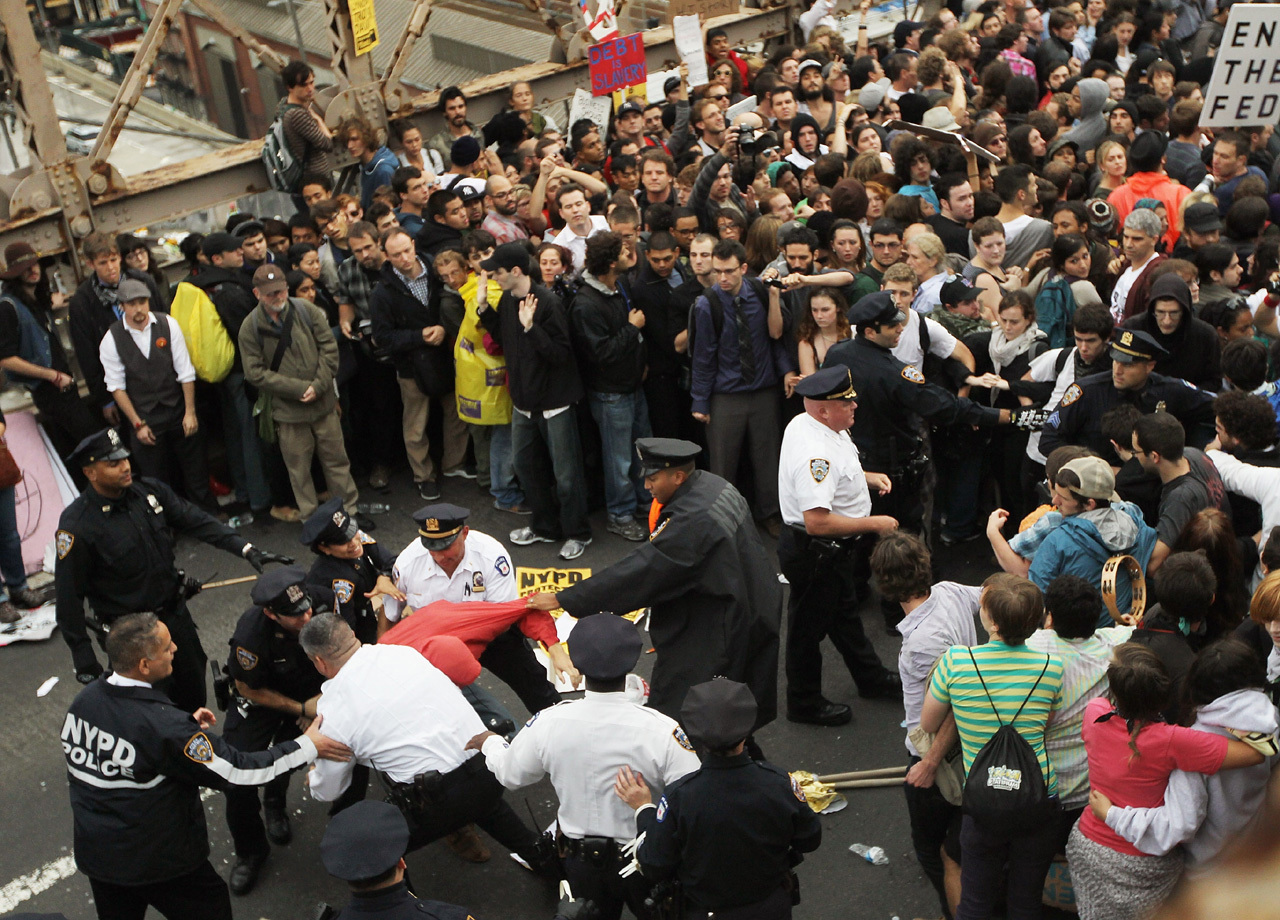 NEW YORK - Protesters speaking out against corporate greed and other grievances were maintaining a presence in Manhattan's Financial District Sunday even after more than 700 of them were arrested during a march on the Brooklyn Bridge in a tense confrontation with police.

The group Occupy Wall Street has been camped out in a plaza in Manhattan's Financial District for nearly two weeks staging various marches, and had orchestrated an impromptu trek to Brooklyn on Saturday afternoon. They walked in thick rows on the sidewalk up to the bridge, where some demonstrators spilled onto the roadway after being told to stay on the pedestrian pathway, police said.

The march shut down a lane of traffic for several hours on Saturday. The majority of those arrested were given citations for disorderly conduct and were released, police said.

The group had meetings and forums planned for Sunday at Zuccotti Park, the private plaza off Broadway the protesters have occupied.

During Saturday's march on the Brooklyn Bridge, some protesters sat on the roadway, chanting "Let us go," while others chanted and yelled at police from the pedestrian walkway above. Police used orange netting to stop the group from going farther down the bridge, which is under construction.

Some of the protesters said they were lured onto the roadway by police, or they didn't hear the calls from authorities to head to the pedestrian walkway. Police said no one was tricked into being arrested, and those in the back of the group who couldn't hear were allowed to leave.

"Multiple warnings by police were given to protesters to stay on the pedestrian walkway and that if they took the roadway they would be arrested," said Paul Browne, the chief spokesman of the New York Police Department.

Erin Larkins, a Columbia University graduate student who says she and her boyfriend have significant student loan debt, was among the thousands of protesters on the bridge. She said a friend persuaded her to join the march and she's glad she did.

"I don't think we're asking for much, just to wake up every morning not worrying whether we can pay the rent, or whether our next meal will be rice and beans again," Larkins wrote in an email to The Associated Press. "No one is expecting immediate change. I think everyone is just hopeful that people will wake up a bit and realize that the more we speak up, the more the people that do have the authority to make changes in this world listen."

Several videos taken of the event show a confusing, chaotic scene. Some show protesters screaming obscenities at police and taking a hat from one of the officers. Others show police struggling with people who refuse to get up. Nearby, a couple posed for wedding pictures on the bridge.

"We were supposed to go up the pedestrian roadway," said Robert Cammiso, a 48-year-old student from Brooklyn told the Daily News. "There was a huge funnel, a bottleneck, and we couldn't fit. People jumped from the walkway onto the roadway. We thought the roadway was open to us."

Earlier Saturday, thousands who joined two other marches crossed the Brooklyn Bridge without problems. One was from Brooklyn to Manhattan by a group opposed to genetically modified food. Another in the opposite direction marched against poverty organized by United Way.

Elsewhere in the U.S. on Saturday, protesters assembled in Albuquerque, New Mexico, Boston and Los Angeles to express their solidarity with the movement in New York, though their demands remain unclear. Occupy Wall Street demonstrators have been camped in Zuccotti Park and have clashed with police on earlier occasions. Mostly, the protests have been peaceful, and the movement has shown no signs of losing steam. Celebrities including documentary filmmaker Michael Moore and actress Susan Sarandon made recent stops to encourage the group.

During the length of the protest, turnout has varied, but the numbers have reached as high as about a few thousand. A core group of about two hundred people remain camped throughout the week. They sleep on air mattresses, use Mac laptops and play drums. They go to the bathroom at the local McDonald's. A few times a day, they march down to Wall Street, yelling, "This is what democracy looks like!"

There has been a growing swell of coverage in mainstream media, but there has been loud complaining that their cause hasn't been championed fast enough — or in the way protesters want.

Misinformation has added to the confusion. For instance, a rumor sprang up on Twitter that the New York Police Department wanted to use tear gas on protesters — a crowd-control tactic the department doesn't use. The claim was eventually retracted, one of several such retractions over the past several days. On Friday, a message said Radiohead would be performing in solidarity for the cause, but the band's management said it wasn't playing.

Earlier clashes with police have resulted in about 100 arrests. Most were for disorderly conduct. Many were the subject of homemade videos posted online.

One video surfaced of a group of girls shot with pepper spray by NYPD Deputy Inspector Anthony Bologna. The woman claimed they were abused and demanded the officer resign, and the video has been the subject of several news articles and commentary. Police Commissioner Raymond Kelly said internal affairs would look into whether Bologna acted improperly and has also said the video doesn't show "tumultuous" behavior by the protesters.

A real estate firm that owns Zuccotti Park has expressed concerns about conditions there, saying in a statement that it hopes to work with the city to restore the park "to its intended purpose." But it's not clear whether legal action will be taken, and police say there are no plans to try to remove anyone.

Seasoned activists said the ad-hoc protest could prove to be a training ground for future organizers of larger and more cohesive demonstrations, or motivate those on the sidelines to speak out against injustices.

"You may not get much, or any of these things on the first go-around," said the Rev. Herbert Daughtry, a longtime civil rights activist who has participated in protests for decades. "But it's the long haul that matters."