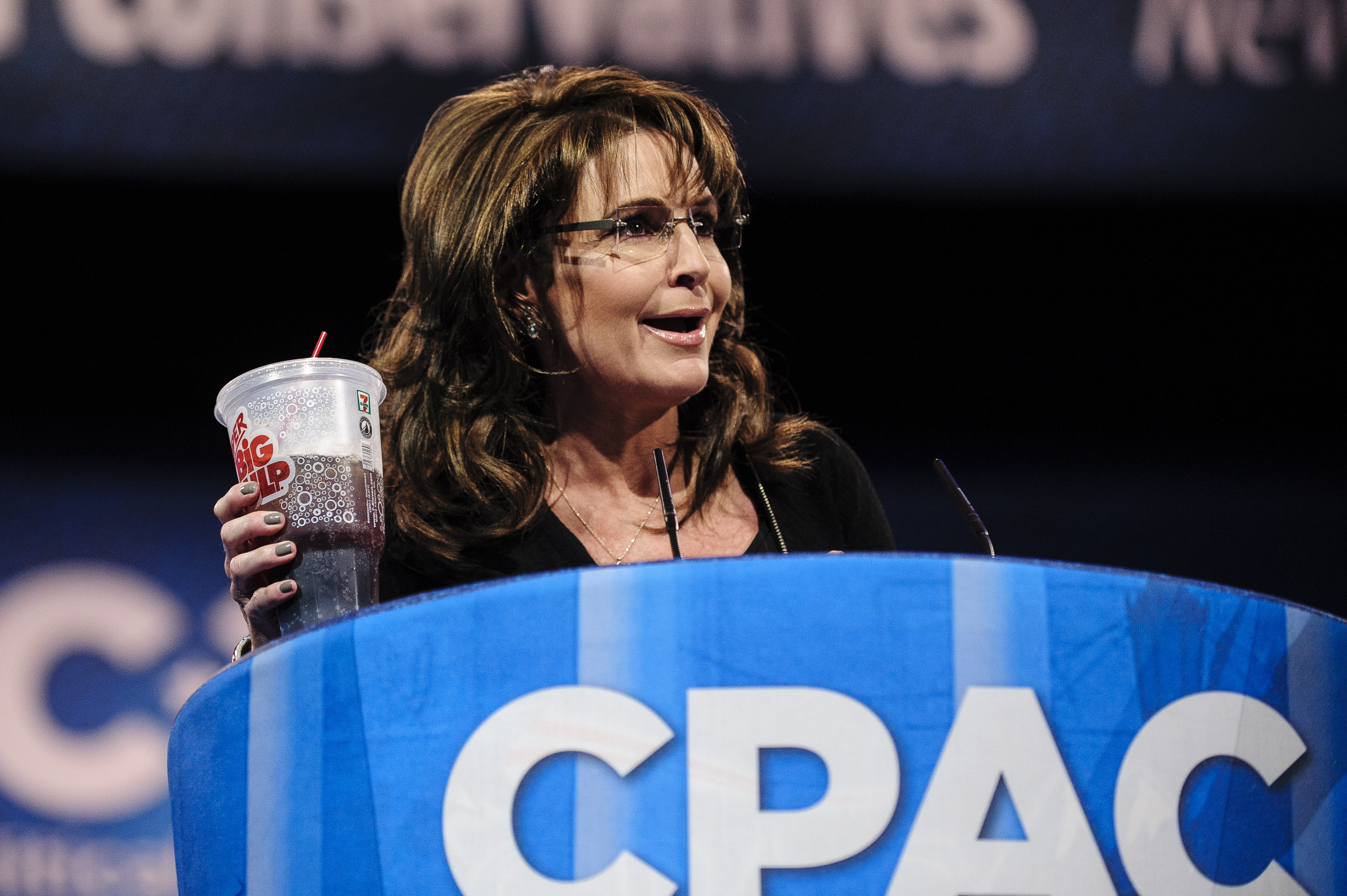 Since cutting the cord from her years-long flirtation with seeking the 2012 GOP presidential nomination, Sarah Palin has maintained in the conservative movement an on-again-off-again presence that seemed to be altogether waning with Fox News' announcement in January that the former Alaska governor would not be returning as a contributor. Then came the 2013 CPAC lineup.

The conference this year was themed, "America's Future: The Next Generation of Conservatives" - on the face of it an odd venue for the 2008 GOP vice presidential nominee whose sensationalistic, polarizing style has been blamed in part for driving a wedge into the Republican Party. But attendees who spoke with CBS News almost universally agreed that Palin belonged.

"Her brand is not as popular anymore," conceded Tufts University student Jacqueline Quander, who calls herself an independent. "But people love her." Penn State student Marty Heckman agreed that thanks to Palin's penchant for controversial statements, like insinuating President Obama "pals around" with domestic terrorists, "public-wise, she's not really appealing to people." But, he added, there remains a place for her at CPAC as well as in the movement: "She has a voice, and she does have good things to say," he said.

Palin's speech on Saturday, during which she went after everyone from President Obama to Michael Bloomberg to Karl Rove - who's taken issue with Palin's involvement in elections past and has recently launched a "super PAC" with the intention of curbing influence from far-right organizations - was met with hearty reception. Her message to Washington - "get over yourself" - offered a humorous reprieve for convention-goers weary from Capitol Hill's unprecedented gridlock.

Arguably the most memorable moment of Palin's speech, though, and a calling card to her signature, in-your-face approach: At one point, she casually pulled out from behind the podium a 7-Eleven Big Gulp, and began slurping away - an homage to the sugary drinks that New York City Mayor Bloomberg tried to ban. Palin assured the wildly applauding crowd: "Bloomberg's not around - we're cool."

Mitt Romney - the same presidential nominee who Rick Santorum once called "the worst Republican in the country" to face off against President Obama on the issue of health care, and who at least one tea party group deemed the day after his Nov. 6 election loss "a weak moderate candidate, hand-picked by the Beltway elites and country-club establishment wing of the Republican Party" - on Friday addressed CPAC, arguably the most who's-who conservative event of the year.

Romney's speech conceded "mistakes" made in his unsuccessful bid for the White House, and was met with courteous applause. And despite Texas Gov. Rick Perry's assessment at the conference Thursday that Romney lost last fall because he wasn't a true conservative, convention-goers, speakers and VIPs largely offered the former Massachusetts governor a pass, subscribing to the "big tent" ideology of the Republican Party.

"I hope to God he's not the future" of the conservative movement, Andy Brown, from White Bear Lake, Minn., said of Romney. Brown said the nominee "didn't have as much of a spine as I'd like," but added that he deserved his invitation to CPAC: "He's still one of us," he said. "He may not have and share the same values as the majority of us, but he was working towards the same goal as us."

Even Santorum, who in the GOP primary offered social conservatives an alternative to the historically moderate Romney, and was the last real threat standing between him and the nomination, told CBS News that Romney "should have been invited here - I'm glad he was." Santorum, who spoke at the conference ahead of Romney, reasoned, "there are different elements to the conservative movement, and it's important to hear from him, and welcome all those to compete in the arena of ideas."

3. The Ron-to-Rand Paul succession is underway

Sen. Rand Paul, R-Ky., seems to be getting pretty comfy on his throne as heir to the Paul dynasty. Since former Rep. Ron Paul, R-Texas - an almost godlike icon of the libertarian movement since his 1988 nomination to the Libertarian ticket for president - announced his retirement from Congress, his son Rand has assured reign over the hands-off government crusade will stay in the family.

Still fresh off his nearly 13-hour filibuster on the House floor against drone strike on U.S. soil - a show that was lauded by Republicans and Democrats alike as a return to regular order - the younger Paul received a hero's welcome at CPAC, not just in the reception to his own speech, but in multiple mentions throughout the conference.

CBS News asked some convention-goers who, of anyone, they would like to see run for president in 2016. The overwhelming answer - among both the college-age demographic that was boon to Paul's fundraising and delegate success in the 2008 and 2012 presidential elections, as well as older conservatives - was Rand Paul.

The transfer of power from Ron to Rand took yet another step Saturday when Sen. Paul won, however narrowly, the CPAC straw poll, with 25 percent of the vote. Thanks to a particularly dedicated fan base, Ron Paul was almost always a favorite to win straw polls, forever a thorn in the side of conservative gatherings hoping to implement a real litmus test of the candidates voters wanted; at the 2011 Values Voter Summit in Washington, event chair Tony Perkins all but charged Paul's supporters with stuffing the ballot box.

4. Chris Christie will be just fine without a CPAC invitation

One of the biggest "burns" of the 2013 CPAC was event chair Al Cardenas's pass on an invitation to New Jersey Gov. Chris Christie, who keynoted the Republican National Convention last fall and whose candid, no-nonsense approach to virtually all aspects of his leadership has vaulted him to a potential top-tier position in the 2016 presidential primary.

Facing heat from Republicans over the snub, Cardenas argued ahead of the conference that by signing up with the federal government for Medicaid expansion and rallying alongside President Obama for a $60-billion-plus "pork" bill for superstorm Sandy relief, Christie had not "earned his wings." Cardenas acknowledged that Christie had been "a crowd favorite at previous CPACs," and said he hopes the governor "earns an invitation next year."

Christie later brushed off the ordeal, but he has plenty of ralliers in his corner. Being rushed through the halls of the Gaylord Hotel on Thursday, Sen. Lindsey Graham, R-S.C., told reporters he thought Christie should have made the cut: "I think he should be" at CPAC, Graham said. "It's up to the people to invite him, but I think he's a good voice in the Republican Party. So yeah, I would have liked to have seen him here, I just think that he represents an element of the party."

And, though most attendees who spoke with CBS News said they backed Cardenas' decision, that majority wasn't reflected in the straw poll results Saturday: Christie came in fourth, with 7 percent of the vote, beating out many people who had spoken over the weekend.

5. There is no "conservative" immigration stance

Sen. Marco Rubio, R-Fla., the son of Cuban immigrants who is widely seen among both parties as a beacon of fresh light on a decades-old problem, didn't bring his push for comprehensive immigration reform to the CPAC podium Thursday. But his position, committed to paper in a recent bipartisan Senate proposal, is well known: Tighten current immigration laws, then open up a pathway to citizenship for the 11 million undocumented immigrants living in the United States.

But Rubio - a rising star in the party who came in a close second in the conference's presidential straw poll - doesn't capture the entire pulse of the conservative movement when it comes to immigration reform, evidently.

Rep. Raul Labrador, R-Idaho, an immigration lawyer, argued during a panel Thursday that a route to citizenship for illegal immigrants is a non-starter in the GOP-controlled House. Adding to hoots and cheers from the crowd, he said, "it would be a travesty, in my opinion, to treat those who violated our laws to get here much better than those who have patiently waited their turn."

Meantime, Rep. Louis Gohmert, R-Texas, advocated for a version of Rubio's proposal, with a more emphatic focus on securing the border before taking any other action on immigration.

6. The conservative movement is just as splintered as ever

Not to play directly into the hands of Sarah Palin, who during her CPAC address summoned the "liberal media folk" in the room to raise their hands if they were furiously filing their "annual conservatives-in-crisis" story, but if there's one thing the conservative movement proved during its premier annual gathering, it's that "conservative" has become a deeply subjective characterization.

From erratically divergent pushes on immigration reform to Sen. Paul disparaging the "stale and moss-colored" Republican Party "of old" to Donald Trump's mystifying inclusion in the event and even more mystifying, somewhat left-leaning speech, CPAC 2013 was an excellent microcosm of the identity crisis conservatism as a whole is facing.

Further emphasizing the point, on day two of the conference Sen. Rob Portman, R-Ohio - a finalist to be Mitt Romney's running mate and a once staunch opponent of gay marriage - announced he was reversing his stance on the issue after his son came out to him as gay. Hours after the announcement, one fired-up convention-goer could be heard shouting through the hotel atrium: "I don't care if your whole family is gay, marriage is marriage!"

7. Despite this list, CPAC doesn't deserve a lot of stock

One-thousand-plus words later, one takeaway from CPAC is that no one should read too much into it. As demonstrated by the previous point, conservatives who attend the annual conference represent a small, very activist slice of the overall mindset of the GOP. The Washington Times reports that 41 percent of straw poll voters were college students - an unrealistic gauge, considering those who wield the most power in the party.

What's more, the CPAC straw poll hasn't been the most reliable prognosticator in years past: In 2010 and 2011, Ron Paul won big.