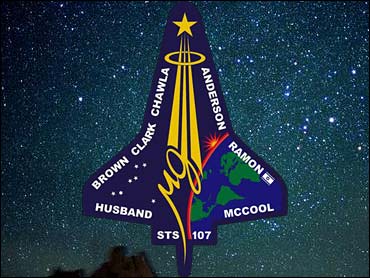 Seven asteroids circling the sun between the orbits of Mars and Jupiter are being named for the astronauts who died in the space shuttle Columbia accident.

NASA's Jet Propulsion Laboratory in Pasadena, California, proposed naming the asteroids for the astronauts. The plan was approved by the International Astronomical Union and announced on Wednesday by the Smithsonian Astrophysical Observatory's Minor Planet Center, the official clearinghouse for asteroid data.

The named asteroids were discovered by former JPL astronomer Eleanor F. Helin in 2001 using the Palomar Observatory near San Diego. The objects range in size from 3.1 miles to 4.3 miles in diameter.

"Asteroids have been around for billions of years and will remain for billions more," Raymond Bambery, head of the JPL Near-Earth Asteroid Tracing Project, said in a statement. "I like to think that in the years, decades and millennia ahead people will look to the heavens, locate these seven celestial sentinels and remember the sacrifice made by the Columbia astronauts."

There are more than 100,000 known asteroids, most of them orbiting the sun in a belt between the orbits of Mars and Jupiter. The largest, Ceres, is about 580 miles in diameter. Astronomers believe there may be millions of other asteroids, ranging from half a mile to many miles across.

Asteroids are thought to be rocky fragments left over from the formation of the solar system some 4.6 billion years ago.

The Columbia astronauts died when their spacecraft disintegrated during re-entry to the Earth's atmosphere. An investigation suggests that a hole was smashed through the heat shield on the craft's left wing when it was hit by foam insulation during launch. The extent of the damage was not discovered during the shuttle's mission. When the craft made its high-speed return to the atmosphere, the intense heat from re-entry melted metal supports inside the wing and the whole craft broke apart.

The three remaining space shuttles were grounded while the Columbia Accident Investigation Board studied the incident and prepared a report. That report is expected late this month. NASA officials have said after safety changes are made in the space shuttle system, the craft may start flying again in March or April.