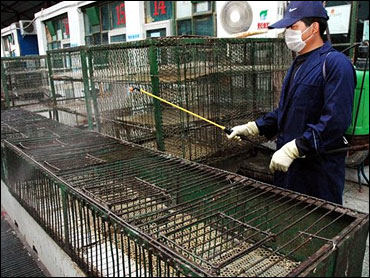 Authorities ordered all live poultry markets in China's capital to close immediately and went door-to-door seizing chickens and ducks from private homes, as the government dramatically beefed up its fight against bird flu on Monday.

Beijing also announced that 6 million birds had been slaughtered around the site of China's most recent bird flu outbreak, and the World Health Organization said it had been asked to help in the reopened investigation of the country's possible first human cases of the virus.

The escalation of anti-bird flu measures in the world's most populous country came as a meeting of hundreds of international experts in Geneva opened with warnings that a global human flu pandemic is inevitable and could cost the global economy at least $800 billion.

"It is only a matter of time before an avian flu virus ... acquires the ability to be transmitted from human to human, sparking the outbreak of human pandemic influenza," WHO director general Lee Jong-wook told the gathering.

Experts fear the bird flu virus that is sweeping through Asia and has entered Europe could mutate into a form that is easily passed between humans, producing a pandemic that could kill millions.

The virulent H5N1 strain of the virus has killed at least 62 people in Asia since 2003, and resulted in the death or destruction of millions of birds.

Beijing on Sunday reopened an investigation into whether bird flu killed a 12-year-old girl and sickened two people last month in cases originally ruled not to be H5N1.

Roy Wadia, a WHO spokesman in Beijing, said on Monday discussions were underway with Chinese officials about what role the agency could play in the investigation, and a decision was likely within days.

China has had no confirmed human infections. But it has imposed increasingly strict measures following warnings that a human case was inevitable if China can't prevent outbreaks among its 5.2 billion chickens, ducks and other poultry.

Experts are especially worried about China because of the vast scale of its poultry industry and because major migration routes for wild birds pass over it.

After China's latest outbreak, in Liaoning province, east of Beijing, authorities destroyed 6 million poultry in 15 villages near the site, where the disease killed 8,940 chickens, the Xinhua News Agency said on Monday.

The culling was unusually large by Chinese standards. Xinhua said rules required the destruction of all birds within two miles of an infection site.

Authorities closed all of Beijing's 168 live poultry markets as a precaution against the possible spread of the virus in the city, state television reported.

In Shanghai, China's largest city, sales of live ducks, quail and other birds have been banned, officials said.

In Vietnam, a leading European health official conceded the European Union should have acted earlier to help Asian nations fight bird flu and pledged $35.7 million to help the region combat the virus.

"The EU should have reacted more quickly to help Southeast Asia to tackle the problem," Health Commissioner Markos Kyprianou said. "It's better late than never."

Also Monday, Swiss drugmaker Roche said it would increase production of the anti-viral drug Tamiflu tenfold to try to cope with international demand, which has skyrocketed because it is believed to be the best known treatment against a possible pandemic.

Roche said it would increase production of Tamiflu to make 300 million treatments by 2007 to try to meet government orders.

At the Geneva meeting, the World Bank's lead economist for the East Asia and the Pacific, Milan Brahmbhatt, warned that "panic and disruption" caused by a global human flu pandemic could cause world gross domestic product to drop by 2 percent or more, amounting to about $800 billion over one year.

The girl, He Yin, who came into "close contact with sick birds," died last month after developing a high fever, Xinhua said. Her 9-year-old brother was hospitalized with similar symptoms but recovered. The third suspected case was a 36-year-old middle school teacher who reportedly fell ill after chopping raw chicken while suffering from a minor injury to his hand, Xinhua said. He also was recovering.

All three initially tested negative for H5N1. But Wadia said it was not unusual for initial tests for a virus such as H5N1 to be wrong. Final results could take weeks.