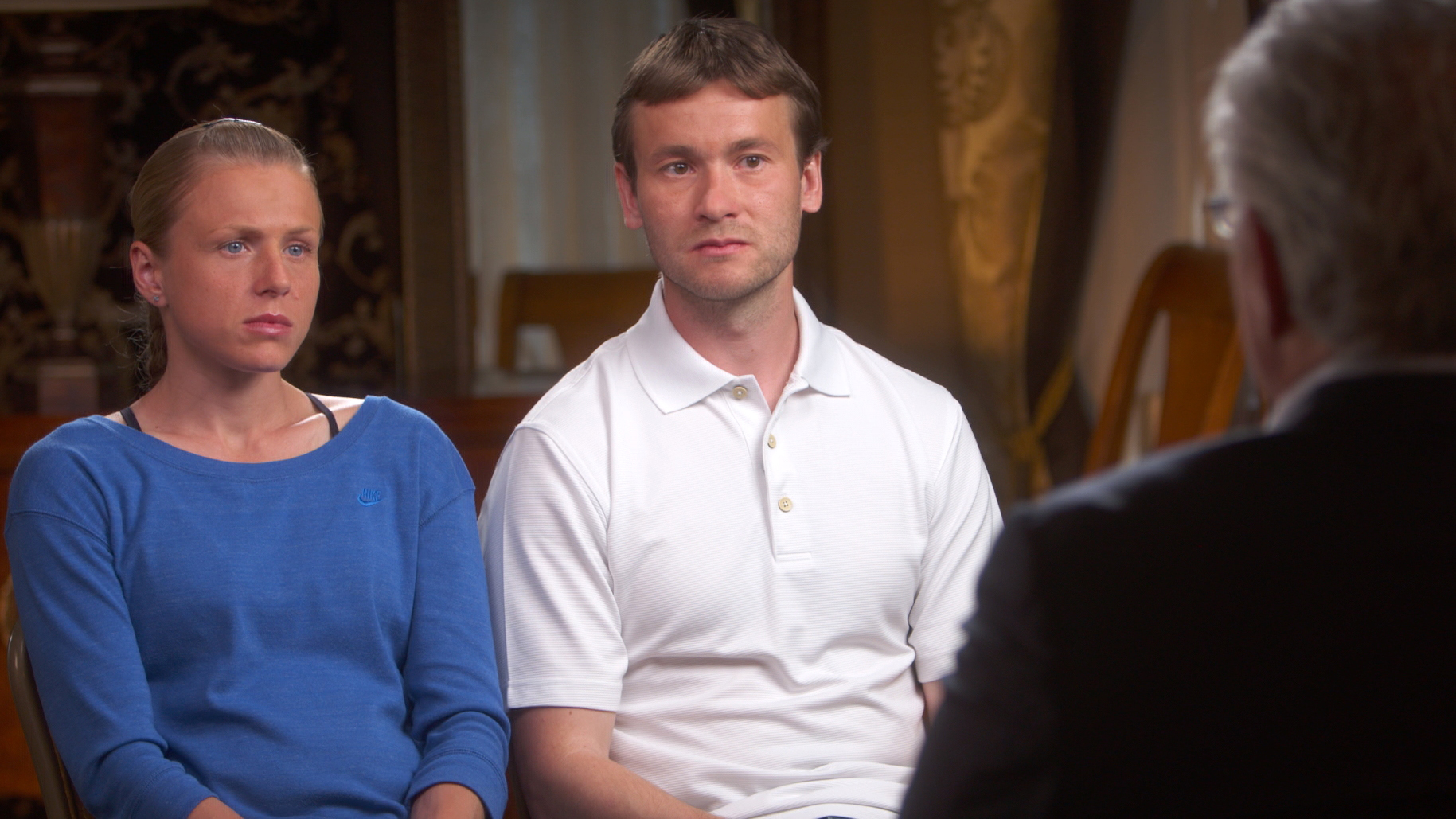 The following script is from "Russia's Dark Secret" which aired on May 8, 2016. Armen Keteyian is the correspondent. Guy Campanile, Andrew Bast and Michael Radutzky, producers.

With the Summer Olympics in Rio less than 100 days away, Russia finds itself embroiled in a doping scandal unseen since the days of the East German sports machine back in the 1970s and 80s. In November, the entire Russian track and field team was suspended after an investigation by the World Anti-Doping Agency found what it called a "culture of cheating."

Tonight, you'll hear from the unlikely couple who provided the proof that took down their country's state-sponsored system of doping. Yuliya Stepanov was one of Russia's elite runners, fueled by steroids. Vitaly Stepanov had a low-level job collecting urine and blood samples inside the very agency assigned to combat drug use in sport. Together, they exposed the dark secrets of their country's doping program and, as you will learn for the first time, damning new details about cheating at the 2014 Winter Games in Sochi, Russia.

Vitaly and Yuliya Stepanov now live in this sparse one-bedroom apartment somewhere in the United States, which we will not reveal for their protection. It's far from the cries of "traitor" and "Judas" back home. The price for believing in the purity of sport.

Vitaly Stepanov: For me, when you have this 100 percent belief that you are doing something right, you must follow this belief and let's see what happens.

Yuliya's maiden name was Rusanova and her specialty was the 800 meters. For more than five years, she willingly took anabolic steroids for strength and the blood-boosting substance EPO for endurance. All of it directed by her Russian coaches and medical staff.

Armen Keteyian: Let me read to you some of the drugs that I have read that you have taken: Testosterone.

Armen Keteyian: Those are powerful drugs.

Yuliya Stepanov: (translator) Yes, these are all steroids.

Armen Keteyian: Did you think anything that you were doing was wrong?

Yuliya Stepanov: It's hard to believe you're doing something wrong when everybody around you says it's right, and there's no other way that you're shown. I was an untouchable, a sacred athlete.

Untouchable meant she could take banned substances without the fear of being caught. The performance-enhancing drugs put her on track for the 2012 Summer Olympics in London. She met Vitaly Stepanov at -- of all places -- a drug seminar. He had a low-level job at the Russian Anti-Doping Agency, known as RUSADA. He was a true believer.

Vitaly Stepanov: I want sports to be fair. If somebody wins, I want him or her to be a real hero, not a fake one.

Fifteen minutes into their first date, he got a dose of reality.

Vitaly Stepanov: She says, "I'm doping. All my teammates are doping as well."

Armen Keteyian: And what do you think?

Vitaly Stepanov: I had suspicion but I was hoping that I'm here to fix something. She says that's not what RUSADA does. RUSADA helps Russian athletes to win medals. RUSADA does testing, but fake testing.

"I want sports to be fair. If somebody wins, I want him or her to be a real hero, not a fake one."

Yet somehow two very different lives equaled a marriage. Vitaly now lived with doping at home and corruption at work.

Vitaly Stepanov: There was a situation when I was offered a bribe by the vice president of the federation -- just like that person comes to me and he says, "This athlete cannot be tested. How much money do you need?" And my answer is this is what I get paid for and I don't need any extra money. So she was selected. She must be tested.

Vitaly says he repeatedly informed his bosses about the corruption, only to be told "What happens in Russia, stays in Russia." Frustrated, he made a dangerous decision to reach outside Russia, to the World Anti-Doping Agency or WADA. Over the next three years, he sent 200 emails and 50 letters detailing what he had witnessed. But Vitaly says WADA told him it did not have the power to investigate inside Russia. His crusade would eventually cost him his job and drive Yuliya to file for divorce.

Yuliya Stepanov: Sometimes I thought he was my enemy. That he wants to interfere. It was not easy.

Vitaly Stepanov: I think I'm having this opportunity to become a taxi driver in Moscow. Well, I'll be a divorced taxi driver. So that's...

Armen Keteyian: That's where you were at that point in time?

Armen Keteyian: The fight was over.

Vitaly Stepanov: The fight was over. I lost.

The turning point came right before the London Games when Yuliya was injured. No longer a medal contender, she lost the protection of the system and tested positive for EPO. Facing a two-year ban, she called Vitaly just days before their divorce would be final.

Yuliya Stepanov: And he suggested, "Let's tell the truth. Let people know the whole truth, the way things happen in Russia. To destroy the system one has to talk about it."

Vitaly Stepanov: After I finished talking to her, you know, I think am I going to be able to get another person on my side? After three years of trying maybe I could get my wife on my side? Trying to clean up sports?

Not only did he bring her to his side, he convinced Yuliya to take an extraordinary risk and use her phone to secretly record her coach giving her steroids, her teammates detailing their drug use, and the team medical director who told her how to get back on the drug program.

In this recording, 800-meter runner Mariya Savinova admitted she took performance-enhancing drugs. Savinova won gold in London. She said: "My coach helps to cover up the tests. There is no other way to do it. Everyone in Russia is on pharma." The World Anti-Doping Agency steered the Stepanovs to a reporter at the German television network ARD. Their tapes became the centerpiece of this documentary which aired in December 2014 and sent shockwaves through the world of sports.

Travis Tygart: You know, we don't pick who our heroes are. But at the end of the day, they stood up. And they did the right thing to ensure that clean athletes' rights are protected around the globe.

Travis Tygart, the CEO of the U.S. Anti-Doping Agency, has been advising the Stepanovs since they fled Russia. Tygart has built a reputation taking down some of the world's most notorious dopers including Lance Armstrong.

Armen Keteyian: You have called what the Stepanovs have uncovered a defining moment in the anti-doping movement. Why is that?

Travis Tygart: The evidence confirmed what a lot of people have believed over the years. This is not just a few athletes obtaining performance-enhancing drugs. This was a system orchestrated by the sport leaders to ensure that they won at all costs.

The outrage sparked by what the Stepanovs uncovered finally forced WADA to launch an investigation. Its 300-plus page report detailed what WADA called, quote a "deeply rooted culture of cheating" that reached the highest levels of the Russian government.

Armen Keteyian: You name it.

Travis Tygart: You name it, they attempted to get away with it.

Armen Keteyian: We're talking about, fair to say, the highest levels of the sports ministry in Russia?

Travis Tygart: Listen, they're responsible. The buck stops there. The cabinet-level position funds and oversees all of sport. So they're ultimately responsible.

When it came to doping in Russia, nobody was more powerful than Grigory Rodchenkov. He ran its drug-testing lab and had the ability to make positive drug tests disappear. The WADA report called him the heart of Russian doping. In the wake of the scandal, Rodchenkov was fired by the Kremlin and has since taken refuge in the U.S., for fear of his own safety because of how much he knows.

Over the last few months, Rodchenkov has been sharing what he knows with Vitaly Stepanov. What he doesn't know is that Stepanov has recorded 15 hours of their conversations. What Rodchenkov has revealed threatens the credibility of the results at the 2014 Winter Games in Sochi, Russia.

Vitaly Stepanov: He told me what I and Yulia did, we could only see this much. But what was happening with cover-ups, it's like this.

Rodchenkov, who ran the drug-testing lab in Sochi, bragged he was in possession of what he called "the Sochi list," the Russians who competed dirty at the games. He also said the Russian equivalent of the FBI -- the FSB -- was directly involved.

Armen Keteyian: What did he tell you about the FSB, the Russian intelligence officers and the Sochi Lab?

Vitaly Stepanov: That some FSB agents worked as doping control officers during the Sochi games. That FSB tried to control every single step of the anti-doping process in Sochi.

We have listened to all of the conversations. And the biggest bomb dropped by Rodchenkov was this: at least four Russians won gold medals at the Sochi Olympics while on steroids, and his lab covered it up. A representative for Rodchenkov told us, for now, he was not available for comment.

Travis Tygart: Look, it's a stunning revelation. And if true it's a devastating blow to the Olympic values.

Rodchenkov's information is likely to influence the governing body of track and field when it meets next month to decide whether to lift its suspension of the Russian track team and allow it to compete in Rio.

Travis Tygart: It's clearly the final nail in the coffin for Russian track and field.

Armen Keteyian: Are you in favor of Russia competing in the Rio games in track and field?

Travis Tygart: We're not. That can't come at the expense of clean athletes' rights.

One of those clean athletes is American Alysia Montaño. She's among the world's top 800-meter runners and was a medal favorite at the 2012 London Games.

Armen Keteyian: Savinova. That's gotta be a little tough for you to watch

This was the first time Montano allowed herself to watch the race she lost to gold medalist Mariya Savinova. You may remember Savinova told Yulia Stepanov everyone in Russia is on pharma.

Alysia Montaño: I just see her blow right past me, and I'm thinking I'm going to go now.

Montano had led the race for about 600 meters before finishing fifth.

Armen Keteyian: I mean, Savinova passed you like you were, with all due respect--

Alysia Montaño: --literally, standing still. And you realize-- at that moment, I realized I'm racing against robots.

Alysia Montaño: They're not really human. You know, they've altered their chemical makeup in a way that I'm not going to be able to do.

Mariya Savinova and another Russian who finished third in the race face lifetime bans for doping. Meaning Montaño should have realized her Olympic dream in the form of at least a bronze medal.

Armen Keteyian: Do you spend much time thinking about what could've been?

Alysia Montaño: Yeah. I mean, I think one of the hardest things is it affects me every single day, you know? My family and I, you know, I'm not doing it for the money, but at the end of the day, I deserve what is owed to me. Those times when, you know, sponsors ask you, "Are you a medalist?" and you have to answer, "no," it makes you hang your head in shame.

At 30, Alysia Montaño is now training to run in Rio. In a twist worthy of a Russian novel she could find herself racing against Yulia Stepanov, who has petitioned to run at the Summer Olympics without a country, but a cause, under an Olympic flag.