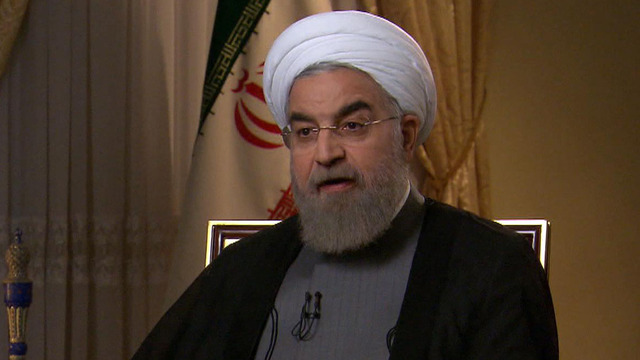 "60 Minutes" correspondent Steve Kroft spoke with Iranian President Hassan Rouhani in Tehran in his first interview with a Western journalist since July's agreement.

STEVE KROFT: I'm sure you realized the difficulty for many Americans to get past the fact that President Obama has signed an agreement with a country that says: "Death to America, death to Israel." What are they to make of it? Is this for internal Iranian political consumption? What are Americans to make of the language?

PRESIDENT ROUHANI: This slogan that is chanted is not a slogan against the American people. Our people respect the American people. The Iranian people are not looking for war with any country. But at the same time, the policies of the United States have been against the national interests of Iranian people, it's understandable that people will demonstrate sensitivity to this issue. When the people rose up against the shah, the United States aggressively supported the shah until the last moments. In the eight-year war with Iraq, the Americans supported Saddam. People will not forget these things. We cannot forget the past, but at the same time, our gaze must be towards the future.

"There has been much ferocious, negative comments about the deal in Iran as there have been in the United States," Kroft told "CBS This Morning" Friday about the long-awaited nuclear agreement. Kroft specifically spoke about the tension between the more moderate President Rouhani and Iran's hard-liners.

Although the deal is still a tough sell and a "bitter debate" is expected when the Iranian parliament reviews the agreement next week, Kroft said Rouhani believes that it will go through.

While Kroft said it was "hard to say" what the deal entailed for the future of U.S.-Iran relations, he said, "I think the Iranians want to go very slowly. On one hand, you have to say there's going to be no future cooperation other than this deal, but you're in this situation where you still have some coordination going on right now..."

Kroft also spoke about the potential economic opportunities that both countries may reap after the deal, and said the Iranian president welcomed the idea of tourism as a way to bolster the relationship between the two countries.