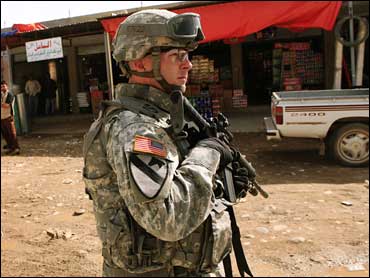 Five U.S. troops were killed in separate attacks this weekend, the military said Monday, pushing the death toll past 100 in the deadliest month so far this year.

Also, a suicide bomber blew himself up during a Shiite funeral in a volatile area north of Baghdad, the deadliest in a series of attacks that killed more than 60 people nationwide.

Police said the bomber detonated his explosives about 6:30 p.m. inside a tent where people were mourning a 60-year-old man from a Shiite family in Khalis, a flashpoint Shiite enclave in Diyala province, where U.S.-Iraqi forces have seen fierce fighting with Sunni and Shiite militants. Officials in Diyala and Baghdad said at least 32 people were killed and 63 wounded as the casualty toll rose from the attack.

The roadside bomb killed three Multi-National Division-Baghdad soldiers and wounded another while they were on a combat patrol Sunday in eastern Baghdad, the military said. An Iraqi interpreter also was killed in the attack.

Another Multi-National Division-Baghdad soldier on a combat patrol was killed by small arms fire in eastern Baghdad Saturday, the military said in a separate statement.

Both attacks occurred in eastern Baghdad, a predominantly Shiite area where American and Iraqi forces have stepped up their activities as part of a security crackdown that began on Feb. 14 to quell the sectarian violence.

The deaths raised to at least 104 American troops who have died in Iraq as April draws to a close, making it the deadliest month since December, when 112 Americans died. The U.S. monthly death toll has topped 100 five other times since the Iraq war began in March 2003, according to an Associated Press count based on military figures.

At least 3,351 members of the U.S. military have died since the war started, according to an AP count.