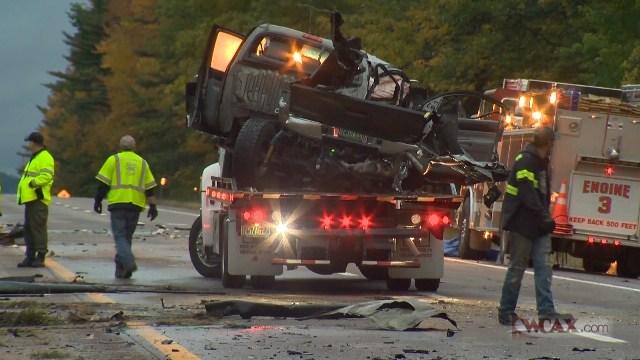 WILLISTON Vt. Five teenagers are dead and multiple others injured after a series of crashes that took place along interstate 89 in Williston on Saturday night, CBS affiliate WCAX reports.

Passerby Paul Swann pulled over to help, but the victims’ car had already burst into in flames.

“I wish that I had some way that I could help somebody because standing there seeing a car full of people go up in flames, it doesn’t feel good to feel helpless,” Swann said.

Police had received over a dozen calls about the truck  and were already responding to the area the crash happened.   A Williston Police officer arrived at the scene first.  “That officer went down to try and extinguish that fire. In  the process of trying to extinguish that fire, he looked up  and noticed that someone had jumped into his cruiser and took off traveling southbound with the emergency lights still activated,” said Vermont State Police Captain Michael Henry.

Police say the cruiser was stolen by 36-year-old Steve Bourgoin moments after the Williston officer arrived.  After heading south a short distance, Bourgoin allegedly turned around and drove back north towards oncoming traffic and back to the scene of the first crash, hitting several other vehicles including the pickup, which was still in the middle of the interstate.

“He was probably doing 100 miles an hour or so in the cruiser when he hit. At that point everybody started -- there were just a bunch of people screaming that were further down the highway down near the Tundra where the impact had taken place, and the cruiser was  on fire,” Swann said.

Multiple emergency crews responded and transported five additional victims to the hospital with non-life threatening injuries. “Some of  the members have been firefighters for 15, 20 years and this  is by far the worst incident that they have ever seen in their entire career. It was described as just truly horrific. There really just is almost no words to describe a scene like  that,” said Williston Fire Department Senior Firefighter Prescott Nadeau.

Bourgoin was taken into custody at the scene and then transported to the UVM Medical Center.  He was listed in critical condition Sunday night.

Several people injured in crashes caused by the cruiser were taken to the hospital, but authorities could not say how many were treated. They said none of the injuries appeared to be life-threatening.