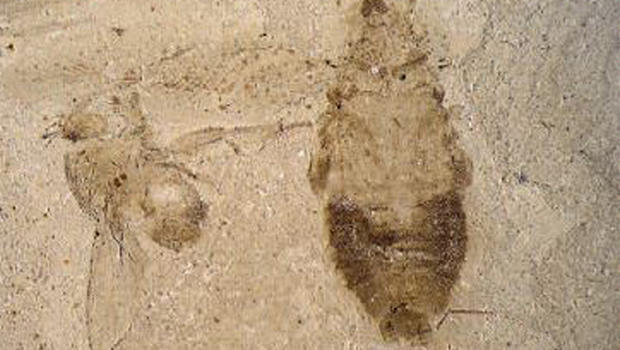 A common European and African cockroach may have gotten its evolutionary start in North America, according to new fossil findings.

More than 70 species ofcockroaches in the genusEctobius currently crawl throughEurope and Africa, making them amongst the most common cockroaches in that part of the world. They measure only about 0.25 to 0.5 inches long (6.35 to 12.7 millimeters), considerably smaller than the American cockroaches (Periplaneta Americana) that can grow to about 1.5 in. long (4 centimeters) and plague major cities and small towns across the United States.

Researchers have previously thought that Ectobius first evolved in Europe and Africa, scuttling around the region since at least 44 million years ago, based on a specimen preserved in Baltic amber of this age. Now, researchers based at the Slovak Academy of Sciences have discovered 49-million-year-old fossils of four different Ectobius species in northwest Colorado, pushing back the insects' first appearance on Earth by roughly 5 million years and its place of origin as modern-day United States rather than the Old World. [In Photos: Ancient Life Trapped in Amber]

The ancient species — discovered in sedimentary rocks dating back to a warm, humid geologic epoch known as the Eocene — have since gone extinct, for reasons that remain unclear to the researchers. However, over the past 70 years or so, at least four different Ectobius species have made their way into parts of the United States and Canada.

"It was always assumed that these four newcomers were the firstEctobius species to have ever lived in North America," study co-author Conrad Labandeira of the Smithsonian Institution's National Museum of Natural History said in a statement. "But the discovery in Colorado proves that their relatives were here nearly 50 million years ago."

Three of the four new species have yet to be described in detail, because they are poorly preserved in the rock. The best preserved has been named Ectobius kohlsi, after fossil collector David Kohls who contributed all of the study specimens along with nearly 150,000 other insect fossils to Smithsonian's Department of Paleobiology.

The researchers analyzed 21 fossil specimens ofE. kohlsi, and were able to identify the specimens as members of the Ectobius genus based on the distinct coloration and wing vein patterns of this group. E. kohlsi individuals were the smallest of the four ancient species discovered, with body lengths reaching only about 0.4 inch (1 cm) and body widths of up to only 0.1 inch (3 mm), the researchers report.

The researchers are not certain how theEctobius genus made its way to the Eurasian continent, but have several theories. For example, since sea levels were relatively low during the Eocene and continents were closer together than they are today, the body of water that is now the Atlantic Ocean would have been much narrower than it is today. This could have allowed the insects to crawl through northeastern Canada, onto Greenland, and then into Scandinavia, Labandeira told LiveScience.

Alternatively, the insects could have traveled through the region known as Beringia — the area between Alaska and Siberia — and made their way through Asia and into Europe from east to west, Labandeira said. Though the researchers are not aware of any Ectobius fossils in Asia, they have not ruled out the possibility that some exist but have yet to be discovered.

Labandeira said he was surprised by the new findings, and that this is a good example how paleontology can be very serendipitous.

"Much of our science is actually unpredictable in the sense that you never know what you are going to find," Labandeira said. "You open the door and there are mysteries. So this is an example of finding something out of time and out of place, and it leads into a very different interpretation of what actually happened."

Next, the team hopes to explore other museum fossil collections to look for better preserved specimens of the new Ectobius species that they have yet to describe.

The findings are detailed this month in the journal Annals of the Entomological Society of America.