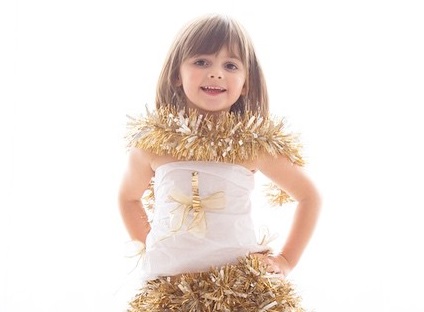 Sydney Keiser may be the youngest fashion designer in the world. The 4-year-old from Milford, Ohio, recently signed a deal with J.Crew to help create a new line of clothing for kids.

She has quite an imagination and parents who never stop encouraging her to bring her unique concepts to life, reports CBS News correspondent Jericka Duncan.

To understand how Sydney works, you have to watch her in action.

Every morning, the fashion phenom creates whatever comes to mind using paper, tape and scissors.

On the day CBS News visited her, she not only came up with two dress ideas within an hour, but also decided to make something for her imaginary sister, a mannequin she calls Mackenza.

Then she modeled off the dress she made for herself.

When asked where her ideas come from, she replied, "My head."

She said she practices about 10 hours a day.

Sydney doesn't quite realize she has a gift, but those gifts were brought to light by Sydney's mom, Angie, who started a blog this year called "Fashion by Mayhem," Sydney's nickname. But it was Angie's Instagram account, which showcased Sydney's dresses, where things really took off. Angie has more than 400,000 followers who are eager to see Sydney's original creations, as well as some red carpet re-creations.

When Angie got the first email from J.Crew, she didn't think it was real.

"Seriously to know the volume of email that was coming in at that time, it was incredibly overwhelming," Angie said. "That particular email, sort of stopped me in my tracks and I thought, 'Is this really real?'"

J.Crew flew the family to New York where Sydney was treated like a rock star. Last week they made it official: "Fashion by Mayhem" would work with J.Crew on a 2015 summer collection for kids.

Some may look at the intricacies of the dresses Sydney created and question whether she really made it.

"I would say she did not come out of the womb with little scissors and packing tape, starting off and putting these things together on her own," Angie said. "There are definitely dresses that I help with a lot more, but she still really has most of the creative control."

"It's a very sort of elaborate arts and crafts of anything that we did when we were kids. Except none of us had Instagram to post it when we were younger," Zee said.

When Sydney's not having fun making dresses, she's busy helping her parents at their photography studio -- or just being a typical 4-year-old having a blast in the park.

Sydney's work has also been featured on Vogue magazine's website, and her mother says they have some other projects in the works that they can't quite talk about yet.

Seattle's Space Needle gets a major makeover
Thanks for reading CBS NEWS.
Create your free account or log in
for more features.
View CBS News In
CBS News App Open
Chrome Safari Continue
Be the first to know
Get browser notifications for breaking news, live events, and exclusive reporting.