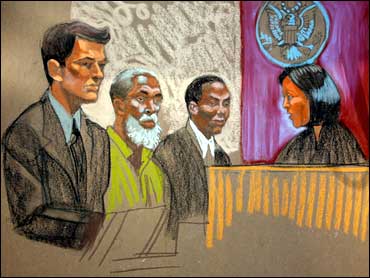 U.S. law enforcement officials said various agencies had been watching the group for the past 18 months.

"The devastation that would be caused had this plot succeeded is just unthinkable," said Roslynn Mauskopf, U.S. Attorney for the Eastern District of New York, where the criminal complaint was filed.

The alleged ringleader of the plot, former JFK Airport employee Russell Defreitas, 63, was the only person in U.S. custody. Following his arrest Friday night, Defreitas appeared in Brooklyn federal court Saturday but did not enter a plea. He is scheduled to have a bail hearing next Wednesday.

Two other suspects are in custody in Trinidad. Abdul Kadir, a citizen of Guyana who has served as a member of the Guyanese Parliament and a mayor of the city of Linden, and Kareem Ibrahim, a citizen of Trinidad.

Mauskopf said she expected judicial proceedings to bring them to the U.S. to commence next week.

Kadir was arrested at the Trinidad airport Friday en route to Venezuela, according to U.S. and Trinidad law enforcement officials, and planning to connect to a flight to Iran.

A fourth man charged in the plot, Abdel Nur, a Guyanese citizen, was still at large but believed to be in Trinidad.

"The enforcement action that we're announcing today was taken to prevent the terrorist plot from maturing into a terrorist act," said Mark Mershon, FBI Assistant Director in charge of the New York field office. "This is a very determined group that engaged in precise and extensive surveillance."

The surveillance included video allegedly recorded in January of JFK airport by Defretias, as outlined in a 33-page criminal complaint. Conspirators also downloaded maps and images of the airport and surrounding neighborhood from Google Earth, officials said.

The alleged plot was documented and unraveled with the help of a confidential informant, who secretly recorded telephone calls and conversations he had in his car with Defreitos. The informant also purchased the video camera and extolled martyrdom, according to court papers.

"He certainly penetrated the group, but he was not the provocateur," Mershon said.

The informant, who has been working with the government since 2004, is a twice-convicted drug trafficker. His infiltration of the plotters began when he met Defreitas at a Queens mall in last July, six months after the government received information about the potential attackers.

While driving around New York together a month later, Defreitas first brought up the plot, saying there were "brothers who wanted to do something bigger than the World Trade Center," according to the complaint.

The alleged plot conceived of fuel tank explosions causing economic and symbolic damage to the United States. Defreitas predicted the attack could destroy JFK's air traffic control tower and "the whole of Kennedy," according to the complaint.

"They love the man," Defreitas allegedly said, referring to the former President. "If you hit that, this whole country will be in mourning. It's like you can kill the man twice," he allegedly said in tape recorded conversations.

Officials portrayed Defreitas as motivated as much by anti-Semitism as hatred of the U.S. He told the informant last August that Muslims always "incur the wrath of the world" while Jews "get a pass," according to the complaint.

Defreitas worked as a JFK cargo handler for Evergreen Airlines in the 1990s, according to officials. He allegedly told the informant when he once saw military parts, including missiles, being shipped to Israel, he believed, to kill Muslims. Defreitas "wanted to do something to get those bastards," according to the complaint.

The pipeline draws fuel from a facility 40 miles away in Linden, New Jersey, and is connected to the privately-owned Buckeye Pipeline, which stretches through Pennsylvania.

"None of it is above ground at JFK," Steve Sigmund, chief spokesman for the Port Authority of New York and New Jersey, which manages all three major New York area airports, told CBS News. The double-hulled fuel tanks at JFK lie 300 feet inside the airport's security fence, have electronic sensors, and are subjected to canine patrols. "The fuel farms are heavily protected," Sigmund said.

As the plot developed, the conspirators referred to their target in code, calling the airport "Chicken Farm," according to the complaint.

Accompanied by the informant, Defreitas traveled to Guyana three times in the past year meeting the other conspirators as recently as last week, according to the complaint. Besides the four men charged, at least seven unnamed individuals were allegedly involved in the plot.

The group allegedly sought backing of Jamaat Al Muslimeen, a Muslim extremist group active in South America and Caribbean and based in Trinidad.

In a 1990 coup attempt in Trinidad, JAM took the prime minister and cabinet hostage for six days. JAM has since been involved in drug and weapons trafficking, kidnapping for ransom, money laundering, and murder, according to the FBI.

Defendant Abdul Nur was chosen to meet a JAM leader about the plot, which he allegedly did last month. 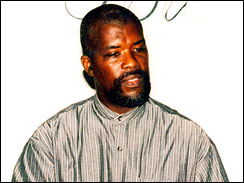 (AP/Stabroek News)
Kadir (pictured, left, in a 2004 file photo) had purported connections with "militants" in South America and the Middle East, according to one of the unnamed individuals cited in the complaint.

His wife, Isha, told the Associated Press her husband flew from Guyana to Trinidad on Thursday. In Venezuela, he planned to pick up a travel visa to attend an Islamic religious conference in Iran.

"We have no interest in blowing up anything in the U.S.," she said Saturday from the couple's home in Guyana. "We have relatives in the U.S."

Kadir left his position in the Guyanese Parliament last year. Muslims make up about 9 percent of the former Dutch and British colony's 770,000 population, mostly from the Sunni sect.

The suspects do not have any known ties to al Qaeda.

Though they discussed using dynamite, they had not obtained any explosives or moved beyond an early planning stage. The plot did not involve airplanes or passenger terminals, officials said.

"The bottom line is that we believe that this threat has been fully contained," the FBI's Mershon said at the news conference. "We do not believe the public was ever in danger."

These arrests mark the latest in a series of alleged homegrown terrorism plots targeting American landmarks.

Six people were arrested a month ago in an alleged plot to unleash a bloody rampage on Fort Dix in New Jersey.

A year ago, seven men were arrested in what officials called the early stages of a plot to blow up the Sears Tower in Chicago and destroy FBI offices and other buildings. That group is scheduled for trial in September.

"Once again, would-be terrorists have put New York City in their cross hairs," said NYPD Commissioner Ray Kelly on Saturday. "It tells is that we must remain vigilant, at home and abroad."