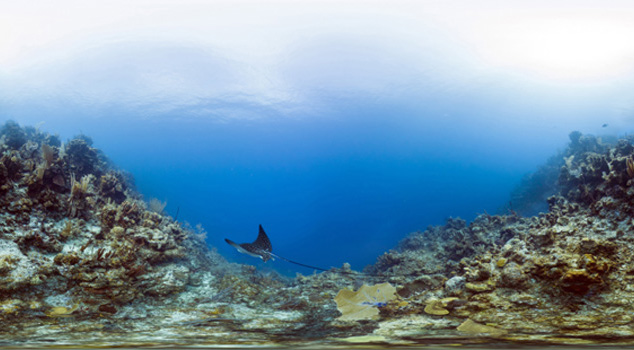 Parts of the world that have rarely -- if ever -- been seen before by human eyes are now open for armchair explorers using any computer or smartphone.

Interactive, 360-degree underwater photos of UNESCO World Heritage Marine Sites -- which let viewers navigate through some of the world's most stunning coral reefs and underwater ecosystems -- have been posted online.

The result of an international collaboration between the Catlin Seaview Survey and its partners -- which include the Global Change Institute, the Scripps Institute, the National Oceanic and Atmospheric Administration and the International Union for Conservation of Nature -- these images are also available in Google Maps' street view.

The goal of the underwater photo survey is not just to reveal the beauty lurking just beneath the waves, but also to educate the public about environmental issues threatening these essential ecosystems and to gather data for scientists tracking the risk.

"We hope that the imagery will help...people realize just how beautiful these places are and how important it is to protect these environments that up until now have been out of sight and out of mind," Richard Vevers, the executive director of the Catlin Seaview Survey, told CBS News in an email.

With the threat of climate change and rising ocean temperatures, these images will create a baseline study of the world's coral reefs, helping scientists understand how they change over time in response to environmental and other factors.

Using a specially designed camera -- the SVII -- divers take 360-degree high-resolution images every three seconds, which are then digitally stitched together. The end result is like an underwater version of Google Street View, allowing viewers to take a "virtual dive" and navigate through the underwater environment.

Typically, each survey lasts up to a month and is usually carried out by a five-person team, explains Vevers. Two divers carry out the individual dives -- often spending close to three hours a day underwater -- covering only a small area per day.

Coral reefs, sometimes called the "rainforests of the sea," are among the most biodiverse places on Earth. Out of 46 designated marine protected areas, the UNESCO World Heritage Marine Program includes several of the world's reefs, including the Great Barrier Reef off the northeast coast of Australia, Tubbataha Reefs Natural Park in the Philippines, and the Belize Barrier Reef Reserve System.

Due to a wide variety of factors -- including coastal development, pollution and overfishing -- the world's coral reefs are deteriorating at the rate of 1 to 2 percent per year. Thermal stress, including rising sea temperatures, is expected to affect nearly 50 percent of the reefs by the 2030s and 95 percent by the 2050s, according to a 2011 report by the World Resources Institute. Rising CO2 levels will increase ocean acidification, which will also reduce coral growth.

If the coral reefs were to die out, it would have a dramatic impact on people who live near coasts or on islands. "Coral reefs also provide food and livelihoods for more than 500 million people around the world, are home to 25 percent of all marine life, and provide natural protection to towns, communities and ports from storms waves and open seas," Vevers explained, estimating their economic impact at $375 billion dollars per year.

The survey team has already explored a number of the UNESCO World Heritage Marine Sites, including the Galapagos Islands and the Sian Ka'an Biosphere Reserve in Mexico.

Vevers notes that there were massive differences in the sites that have been visited. For example, in the Caribbean, an 80 percent loss in coral coverage over the past few decades makes the region one of the least healthy in the world. "However, we have seen remarkably healthy reefs in this area too that buck this trend. Bermuda, which is close to the Caribbean, was a particularly notable example with 80 percent coral coverage in areas," he says.

The Catlin Seaview Survey team hopes to explore ten more World Heritage Marine Sites over the course of the next two years. Future sites will include the Cocos Island National Park in Costa Rica, Papahanaumokuakea Marine National Monument in Hawaii, and the Ogasawara Islands in Japan.

"It really is an incredible experience to dive with the SVII camera -- it's like being on a global underwater safari. You never know what is around the next corner," said Vevers. "We've been visiting amazing locations, some of which have probably never been seen before by human eyes. It's been an amazing privilege."