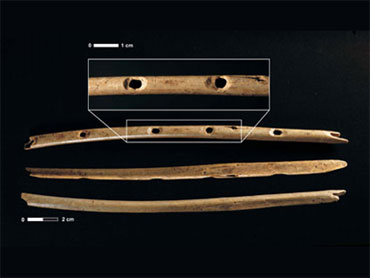 A bird-bone flute unearthed in a German cave was carved some 35,000 years ago and is the oldest handcrafted musical instrument yet discovered, archaeologists say, offering the latest evidence that early modern humans in Europe had established a complex and creative culture.

A team led by University of Tuebingen archaeologist Nicholas Conard assembled the flute from 12 pieces of griffon vulture bone scattered in a small plot of the Hohle Fels cave in southern Germany.

Together, the pieces comprise a 8.6-inch instrument with five holes and a notched end. Conard said the flute was 35,000 years old.

"It's unambiguously the oldest instrument in the world," Conard told The Associated Press this week. His findings were published online Wednesday by the journal Nature.

The reassembled instrument was too fragile to be played, but Conard worked with another academic to make a copy of it from the same type of bone and to play it and produce recordings of songs such as "The Star-Spangled Banner."

Other archaeologists agreed with Conard's assessment.

April Nowell, a Paleolithic archaeologist at the University of Victoria in Canada, said the flute predates previously discovered instruments "but the dates are not so much older that it's surprising or controversial." Nowell was not involved in Conard's research.

The Hohle Fels flute is more complete and appears slightly older than bone and ivory fragments from seven other flutes recovered in southern German caves and documented by Conard and his colleagues in recent years.

Another flute excavated in Austria is believed to be 19,000 years old, and a group of 22 flutes found in the French Pyrenees mountains has been dated at up to 30,000 years ago.

Conard's team excavated the flute in September 2008, the same month they recovered six ivory fragments from the Hohle Fels cave that form a female figurine they believe is the oldest known sculpture of the human form.

Together, the flute and the figure - found in the same layer of sediment - suggest that modern humans had established an advanced culture in Europe 35,000 years ago, said Wil Roebroeks, an archaeologist at Leiden University in the Netherlands who didn't participate in Conard's study.

Roebroeks said it's difficult to say how cognitively and socially advanced these people were. But the physical trappings of their lives - including musical instruments, personal decorations and figurative art - match the objects we associate with modern human behavior, Roebroeks said.

"It shows that from the moment that modern humans enter Europe ... it is as modern in terms of material culture as it can get," Roebroeks told The AP. He agreed with Conard's assertion that the flute appears to be the earliest known musical instrument in the world.

Neanderthals also lived in Europe around the time the flute and sculpture were made, and frequented the Hohle Fels cave. Both Conard and Roebroeks believe, however, that layered deposits left by both species over thousands of years suggest the artifacts were crafted by early modern humans.

"The material record is so completely different from what happened in these hundreds of thousands of years before with the Neanderthals," Roebroeks said. "I would put my money on modern humans having created and played these flutes."

In 1995, archaeologist Ivan Turk excavated a bear bone artifact from a cave in Slovenia, known as the Divje Babe flute, that he has dated at around 43,000 years ago and suggested was made by Neanderthals.

But other archaeologists, including Nowell, have challenged that theory, suggesting instead that the twin holes on the 4.3-inch-long (11-centimeter-long) bone were made by a carnivore's bite.

Turk did not respond to an e-mail seeking comment.

Nowell said other researchers have hypothesized that early humans may have used spear points as wind chimes and that markings on some cave stalactites suggest they were used as percussive instruments. But there is no proof, she said, and the Hohle Fels flute is much more credible because it's the oldest specimen from an established style of bone and ivory flutes in Europe.

"There's a distinction between sporadic appearances and the true development of, in this case, a musical culture," Nowell said. "The importance of something like this flute is it shows a well-established technique and tradition."

Conard said it's likely that early modern humans - and perhaps Neanderthals, too - were making music longer than 35,000 years ago. But he added the Hohle Fels flute and the others found across Europe strengthen evidence that modern humans in Europe were establishing cultural behavior similar to our own.
By Associated Press Writer Patrick McGroarty

The monument, which was in the shape of an over-sized iPhone, was located on a university campus in St. Petersburg

Mark Zuckerberg lays out long-term vision for Facebook
Thanks for reading CBS NEWS.
Create your free account or log in
for more features.
View CBS News In
CBS News App Open
Chrome Safari Continue
Be the first to know
Get browser notifications for breaking news, live events, and exclusive reporting.