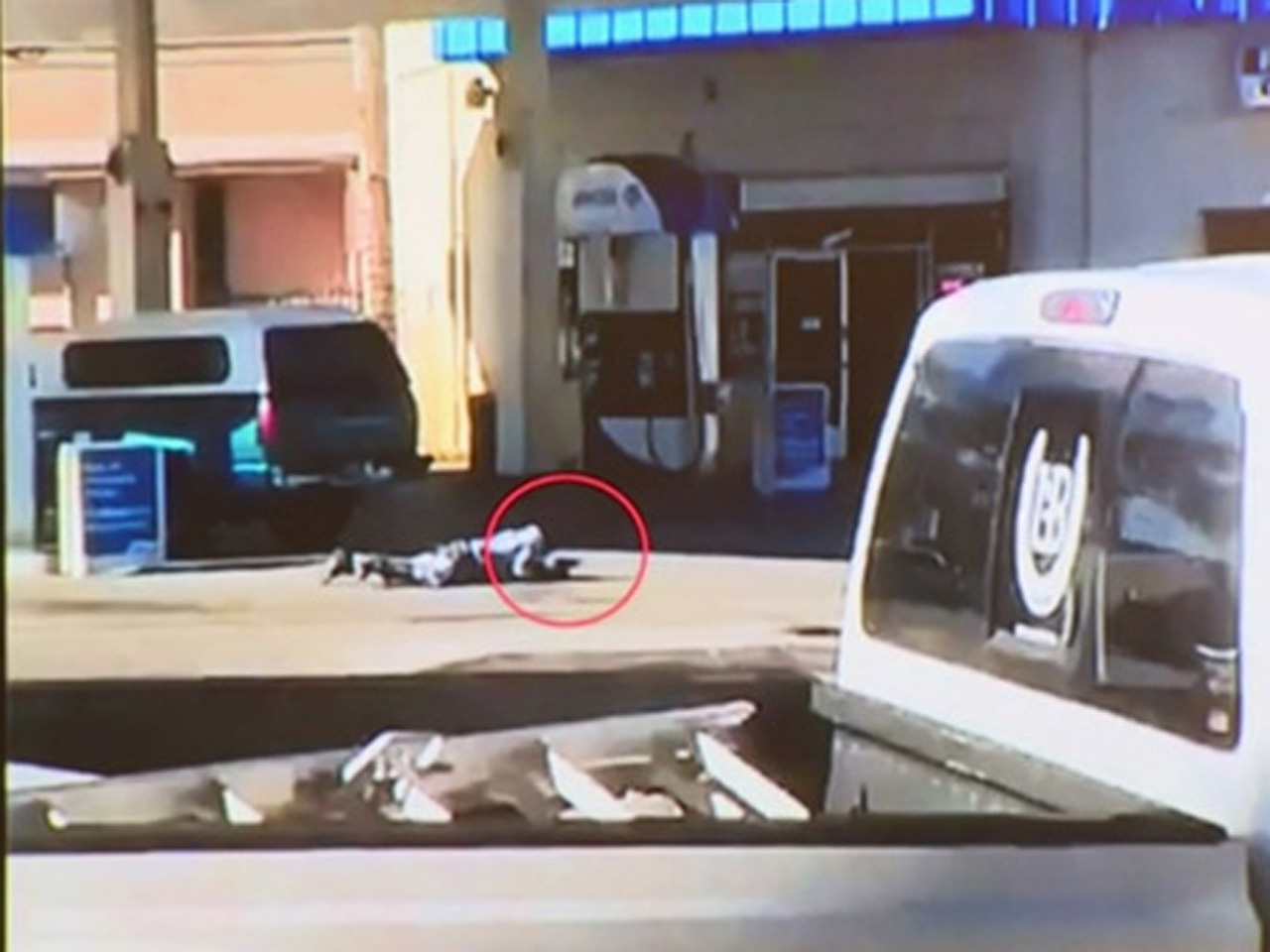 LYNWOOD, Calif. -- Sheriff's deputies fired 33 bullets at a man who they say was armed with a .45 caliber handgun in the Lynwood area of Los Angeles County.

The incident was captured on video, which at one point shows the suspect crawling away as the deputies unloaded their guns into him.

The captain said it wasn't necessarily unusual for a deputy to fire that many rounds.

"In this case, there was some grave concern for the number of victims that were in that location. The suspect presented a threat to the deputies and the community and they took the action that they did," he said.

The man, identified Sunday as Nicholas Robertson, 28, of Lynwood, died Saturday following the deputy-involved shooting in the area of Long Beach Boulevard and Magnolia Avenue.

Prior to the confrontation, Katz said deputies had yelled out commands to the suspect as he crossed an intersection. When the suspect failed to comply, the shooting unfolded.

"He did not comply with their repeated requests to drop the weapon," Katz said.

The captain said Robertson's gun was not loaded when he encountered deputies, but he had ammunition with him. Asked if he ever pointed the gun at deputies, Katz said "pointing is relative."

"We do have evidence that the suspect did fire the weapon multiple times prior to the interaction with the deputies," said Katz in referring to 911 calls the department had received.

Some of the witness accounts said the suspect was armed while others indicated that the suspect had discharged his firearm six to seven times in a residential area.

"According to witnesses who called 911, six to seven gunshots were fired by the suspect in a residential area," the captain said.

One business reported that the suspect had entered and was behaving erratically and yelling expletives. Employees there reported that he was armed with a handgun.

During the news conference, authorities released an image of the suspect on the ground "clearly with a handgun in his hand," Katz said. Video from a nearby business seems to show the suspect purportedly carrying what appears to be a handgun.

Katz said the first 911 call was received at 10:53 a.m. and deputy-involved shooting happened six minutes later. The suspect, according to Katz, retained his weapon through the entire time. Katz said the gun, which was not registered to the suspect, was recovered from him after the shooting incident.

"It's very troubling anytime you have someone shot and killed by police officers, especially those who are shot in the back and shot again and they crawled to their death," Najee Ali, the political director of the National Action Network, said at a news conference held outside Sheriff's Headquarters.

But Ali urged the community to remain calm and not rush to judgment.

The deputies involved in the incident have been reassigned from field duty pending an assessment of the shooting, said Sheriff Jim McDonnell. Both have at least one year of experience in the field, according to Katz. Their identities have not been released.

Deputies stressed that the investigation was still in its preliminary stages.

Katz said detectives have been canvassing the area for digital video from cellphones and businesses in the area.

Without disclosing specifics, authorities said the suspect had prior contact with law enforcement.

Before the various surveillance videos were released Sunday, Robertson's family passionately denied that he had a gun.

"I can't say who was right or who was wrong. I get they have a protocol but when you look at the video it's obvious he didn't pose a threat," said Michael Green, Robertson's brother-in-law.

"After the first shot he hit the ground," said the brother-in-law, "he was immobilized. Nothing you could do to him but to stand here and keep shooting, reload and keep shooting. It was just uncalled for."

Investigators say after the incident was all over they found Robertson's gun was unloaded but that he had ammunition on his person.

Robertson's family held a vigil in his memory Sunday evening.