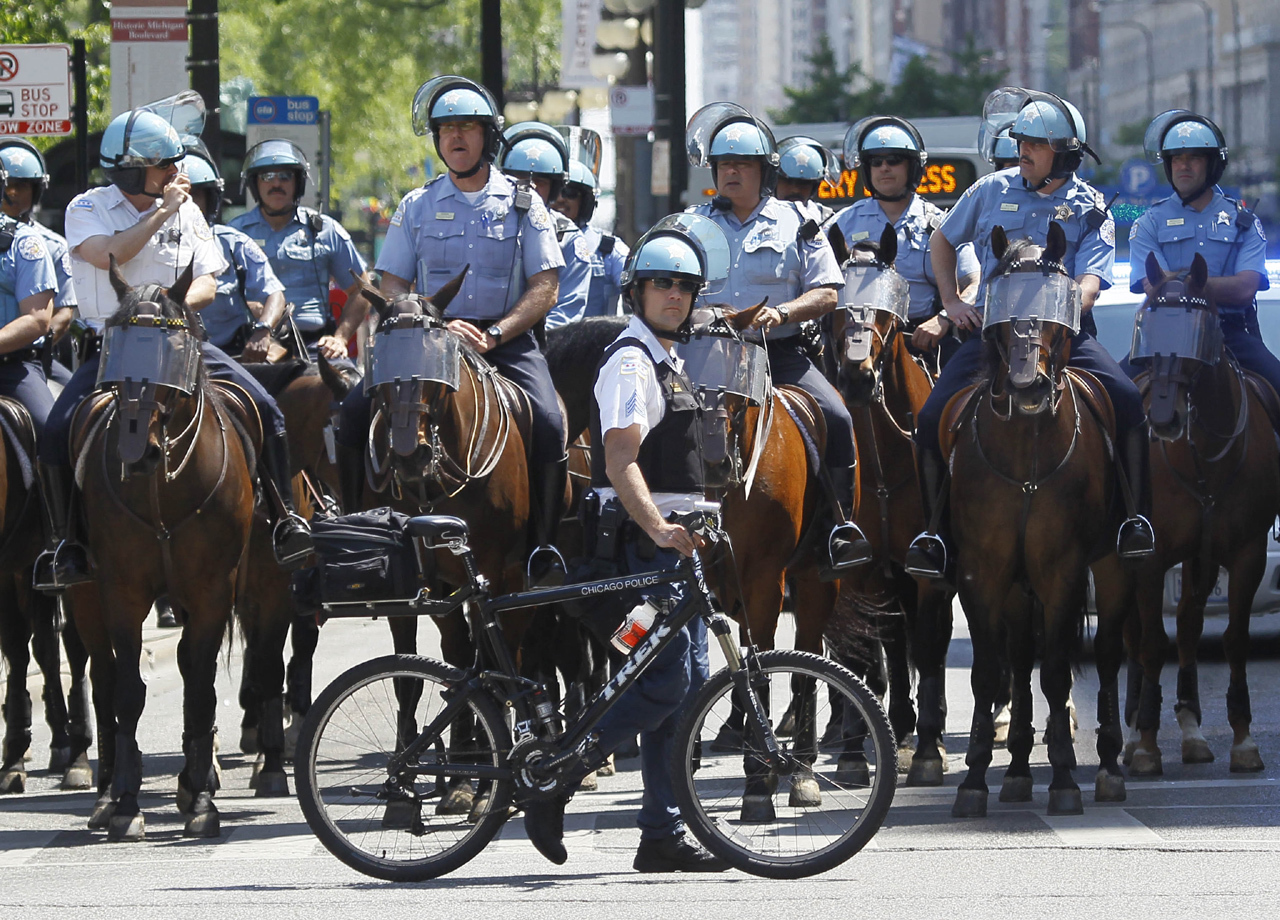 (CBS/AP) CHICAGO - Three men arrested earlier this week when police raided a Chicago apartment were being held on terrorism conspiracy charges Saturday stemming from allegations that they tried to make Molotov cocktails ahead of the NATO summit, but the first major dress rehearsal of this weekend's large-scale protests was relatively peaceful.

CBS Station WBBM reports some protesters said there was nothing more incriminating than home brewing equipment in the Bridgeport apartment where they were staying.

Their attorney, Sarah Gelsomino of the National Lawyers Guild, told the wire the charges were "trumped up."

The men are "absolutely in shock and have no idea where these charges are coming from," Gelsomino told The Associated Press.

The three defendants were among nine protesters arrested in a controversial raid at the Bridgeport apartment, in which several people complained that police mistreated them and violated their civil rights.

Six others also arrested Wednesday in the raid of the South Side apartment where they were staying were released Friday without charges being filed.

One of those protesters, Occupy activist Darrin Annussek of Philadelphia, denied there were Molotov cocktails in the apartment or that raw materials had been compiled to make them.

"No way," Annussek said. "If I had seen anything that even resembled (a Molotov cocktail), I would have left."

He claims that during 18 hours in custody, police never told him why he was arrested, read him his rights or allowed him to make a phone call. He said he remained handcuffed to a bench, even after asking to use a restroom.

"There were guards walking by making statements into the door along the lines of `hippie,' `communist," `pinko,"' a tired-looking Annussek told reporters just after his release.

Stoppa declined to elaborate on the case beyond confirming the charges.

Security has been high throughout the city in preparation for the summit, where delegations from about 60 countries, including 50 heads of state, will discuss the war in Afghanistan and European missile defense.

Among the pre-NATO protests planned for Saturday was a march on the home of Mayor Rahm Emanuel. The big show will be on Sunday, the start of the two-day NATO summit, when thousands of protesters are expected to march 2 ½ miles from a band shell on Lake Michigan to the McCormick Place convention center, where delegates will be meeting.

On Friday, Chicago police on bicycles and foot tailed activists through the streets of the city, but ignored taunts and went out of their way to make as few arrests as possible. Protesters made a lot of noise and tried to evade police, but otherwise were relatively uneventful.

In all, police said there was a single arrest on a charge of aggravated battery of a police officer. Another man was briefly taken into custody, but he was released a short time later after being questioned by police, a department spokesman said.

Also, officers were seen trying to arrest a man who scaled a bridge tower and pulled down part of a NATO banner. Earlier, police handcuffed a man at the end of a noisy but largely peaceful rally organized by the nation's largest nurses union.

From the police side of the protest line, it went largely how Chicago Police Superintendent Garry McCarthy envisioned it earlier this month when he said, "We're not going to lock somebody up for dropping a banana peel."

Michael Olstewski, 22, a recent music school graduate who came to Chicago from Atlanta, one of hundreds of protesters who took to the streets on Friday for a spontaneous march, said protesters may be waiting to make a big statement. He said he didn't do anything to get arrested Friday, "but later in the week ... If I feel it's strategic and a powerful statement" he would provoke police into arresting him.

Nor were some protesters particularly surprised that police exhibited restraint even when they acted in ways that might have gotten them arrested — like the dozens of protesters who sat in the street for a short time before they got up and left after one of them, Micah Philbrook, grabbed a bullhorn and told them to leave.

In fact, at one point, on the bridge at Michigan Avenue, the gateway to the city's famed shopping district, the Magnificent Mile, the number of officers swelled and officers appeared to be poised to forcibly remove the protesters from the area. Instead, they simply waited while the protesters left on their own.

Observers said that police showed restraint during the day that included the sight of hundreds of protesters breaking away from a large rally, march through the streets and taunt police as well as shouting about everything from bank bailouts to nuclear power.

"I think the police are handling themselves very well," said Jennifer Lacy, a freelance videographer and editor from Chicago who took pictures of the spectacle with her cell phone. "It seems like they have it all organized, and it doesn't seem their tempers are going to be easily flared. I think they're mindful we're going to be on the world stage."

But Ben Meyer, a Chicago lawyer who was observing the protest for the National Lawyers' Guild, denounced what he called an excessive police presence at Friday's rally, which included dozens of officers milling through the crowd and lining the perimeter, some of whom were videotaping the rally.

"It's frustrating the state needs to come out and show this much force for a nurses' rally," he said. "They have everyone from the superintendent on down here. It's just ridiculous."

Members of National Nurses United were joined by members of the Occupy movement, unions and veterans at the rally, where they demanded a "Robin Hood" tax on banks' financial transactions. The event drew several thousand people and featured a performance by former Rage Against the Machine guitarist Tom Morello, an activist who has played at many Occupy events.

Deb Holmes, a nurse at a hospital in Worcester, Mass., said she was advocating for the tax but also protesting proposals to cut back nurses' pensions.

"We've worked 30 years for them and don't want to get rid of them," she said.