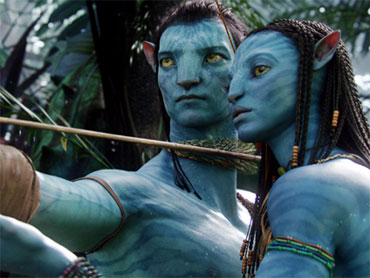 The appeal of 3-D movies helped boost movie ticket sales by nearly 8 percent to a record $29.9 billion worldwide in 2009, according to the Motion Picture Association of America.

The jump, from $27.8 billion a year earlier, was driven by a rise in ticket prices and the first increase in attendance in the U.S. and Canada in two years, the MPAA said. On top of that, theaters worldwide benefited from the popularity of 3-D movies, as they brought in more movie-goers, who buy tickets that cost more than regular screenings.

"Whenever screens are converted or built in 3-D the public seems to be embracing it," said Bob Pisano, the MPAA's president.

Photos: "Avatar" Gets Blue-Carpet Debut
Photos: James Cameron: King of the World
3D: Soon Coming at Ya' at Home
Avatar Actor on Growth of 3D
"Up"

Although 3-D movies represented less than 4 percent of the 558 films released all year, they accounted for $1.14 billion, or 11 percent of the $10.6 billion total box office haul in the U.S. and Canada. In fact, the bulk of the $1 billion increase in North American ticket sales is attributable to the 3-D movies; box office sales for 2-D movies increased by only about $70 million over 2008.

The overseas impact of 3-D was not as clear, but the number of screens capable of showing 3-D movies grew fivefold to 5,441 from 1,029.

The average ticket price in the U.S. and Canada rose 32 cents, or 4 percent, to $7.50, even though consumer prices for most goods fell amid the longest and deepest recession since the Great Depression of the 1930s.

Despite tighter pursestrings, the number of tickets sold in the U.S. and Canada grew nearly 6 percent to 1.42 billion, as people sought a way to escape their worries. The number of yearly visits to the cinema rose to 4.3 per person from 4.2, the first increase since 2002, when it was 5.2 per person.

"We believe it's because in times of economic distress, people are looking for value," Pisano said, arguing that going to the movies with a family of four is still cheaper than attending a theme park or major sporting event.

From the beginning of the year through Tuesday, ticket sales were still rising, up nearly 5 percent from a year ago to $2.06 billion in the U.S. and Canada, helped by the continuing popularity of "Avatar," the MPAA said.