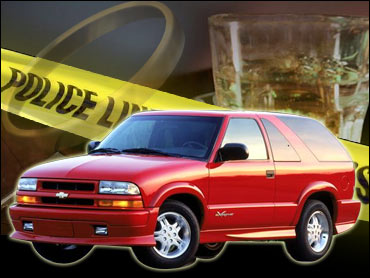 Joanne and Frank Riva of Holbrook, N.Y., celebrated their 25th wedding anniversary Saturday with dinner out — and then her alleged drunken killing of her husband by running him over with a SUV.

Construction worker Frank Riva, 49, died of head injuries and was found by police lying on the street in front of the couple's home, after witnesses who heard the argument called police to say there was a body in the street.

According to the New York Daily News, police say the couple argued after returning from dinner.

Joanne Riva's attorney, Anthony Pearl, told the paper Frank Riva attacked his wife, and she ran out of the house and got into the 2003 Chevy Blazer to leave. Joanne Riva didn't realize she had struck and killed her husband.

"There was a history of him hitting her and her leaving to go to a sibling's house until he calmed down," Pearl said. "That's what happened [Saturday] night."

Police said they do not know what the couple was arguing about, but that they had been called to the house several times for domestic disputes, once as recently as last year, reported Newsday.

Riva, 48, was arrested a few hours after the accident at a relative's house in Oakdale, N.Y. The relative had called police.

The Rivas have two grown children, ages 19 and 21.

Joanne Riva was arraigned on Father's Day on charges of drunken driving and leaving the scene of an accident. She was held on $20,000 bail.

Police say preliminary evidence indicates running over her husband could have been an accident.

Neighbors described the Rivas as a hard-working and happy couple.

"There was nothing, nothing wrong with them that could have said that this would happen," said a neighbor, staring at the bloodstain in the middle of the street.

"Frank was a really good guy," said another neighbor. "I'm going to miss him."