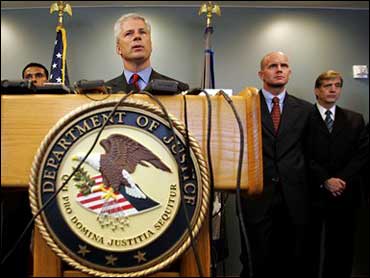 The Algerian man convicted of plotting to blow up the Los Angeles airport on the eve of the millennium was sentenced Wednesday to 22 years in prison.

Ahmed Ressam got a lighter sentence than prosecutors had requested, reflecting his cooperation in telling international investigators about the workings of terror camps in Afghanistan.

"There is no doubt about it. With this sentence, Ressam caught a bit of a break from this judge, mostly because the would-be bomber DID help the feds as an informant for many years following his arrest," said CBS News Legal Analyst Andrew Cohen. "I think the judge wanted to reward that behavior and he probably did."

But Ressam, 38, could have received a shorter sentence had he not stopped talking to investigators in early 2003. Prosecutors argued that his recalcitrance has jeopardized cases against two of his co-conspirators.

"This still isn't a light sentence but it is not nearly as long as a lot of people expected. Essentially, the judge gave Ressam time off in advance for his good behavior over many years of providing good information to the feds following his arrest and conviction," Cohen said.

"We did not need to use a secret military tribunal, detain the defendant indefinitely or deny the defendant the right to counsel. ... Our courts have not abandoned the commitment to the ideals that set this nation apart," he said.

Ressam was arrested in Port Angeles in December 1999 as he drove off a ferry from British Columbia with a trunk full of bomb-making materials.

"I'm sure prosecutors are disappointed but they surely shouldn't be surprised," Cohen added.

Ressam could be out of prison in 13 to 14 years with credit for time served and potential reductions for good behavior, but then will almost certainly be deported, public defender Thomas Hillier said at a news conference.

Hillier said Ressam showed little reaction to his prison term. "He takes the news better than I do," the attorney said.

U.S. Attorney John McKay said he doubted Ressam would provide any more information in the future.

"What else he knew may not ever be communicated to us, and that's part of the price he paid today," McKay said at a news conference after the sentencing,

Ressam had been scheduled for sentencing in April. After more than two hours of arguments, Coughenour called it off, giving Ressam three more months to resume cooperation.

Coughenour and federal prosecutors want Ressam to testify against his two co-conspirators, Samir Ait Mohamed and Abu Doha, who are awaiting extradition from Canada and Britain, respectively.

Information provided by Ressam in the past was given to anti-terrorism field agents around the world; in one case, helping to prevent the mishandling and potential detonation of the shoe bomb that Richard Reid attempted to blow up aboard an American Airlines flight in December 2001, Hillier said.

During arguments Wednesday, Hillier said the government's sentence recommendation was based on "self-serving, self-generated mathematics" that did not account for Ressam's cooperation.

"It is a flat fact that law enforcement, the public and public safety have benefited in countless ways," from Ressam's cooperation, Hillier said.

Coughenour unexpectedly called Andy Hamilton, a former assistant U.S. attorney who prosecuted Ressam at trial, from the courtroom gallery to give a sentencing recommendation.

After noting that Ressam's sentence would be "perhaps the most important sentence this court has ever had," Hamilton told the judge that Ressam's reluctance to cooperate should weigh heavily.

"You can't be a cooperator and a terrorist," Hamilton said. "When he stopped cooperating, he went back to being what he was."