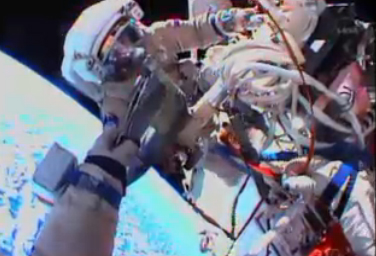 Russian cosmonauts Oleg Kotov and Sergey Ryazanskiy are gearing up for a planned six-hour spacewalk today, the crew's second attempt to install two cameras for a Canadian company that plans to downlink high-definition Earth views to subscribers around the world.

Floating in the Pirs docking and airlock module, the cosmonauts plan to open a hatch to the vacuum of space at 9:10 a.m. EST to officially kick off the year's first spacewalk.

For identification, station commander Kotov will go by the call sign EV-1. Ryazanskiy will use the call sign EV-2. Both men will be wearing Russian Orlan suits with blue stripes and both will be equipped with NASA helmet cameras.

The primary goals of the excursion are to re-install a steerable high-definition 4K video camera and a fixed medium-resolution still camera on the hull of the Zvezda command module for UrtheCast, a Vancouver-based company that plans to operate the cameras as a commercial venture.

During a spacewalk Dec. 27, Kotov and Ryazanskiy successfully installed the cameras, but a wiring problem prevented data from reaching the ground. The cameras were taken back inside the station for troubleshooting and engineers now believe the problems have been resolved.