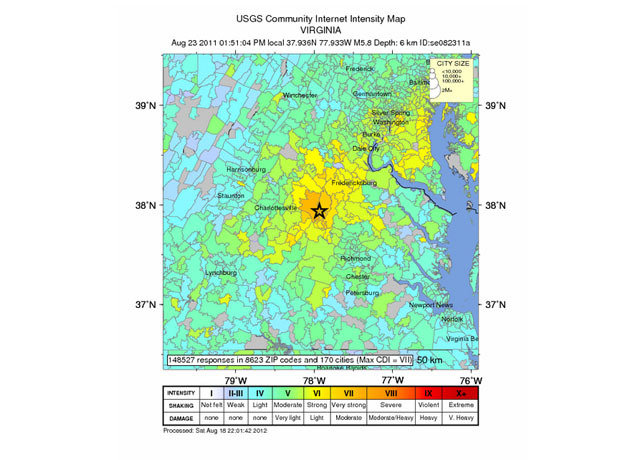 (LiveScience) Nearly a third of the U.S. population reported feeling the earthquake that struck Virginia last year, probably more than any other earthquake in U.S. history, researchers say.

The magnitude 5.8 quake that struck near Mineral, Va., nearly a year ago on Aug. 23, 2011, was felt from Maine to Florida, from Cape Cod to Chicago, and was among the largest ever recorded on the Eastern Seaboard. Damage from the earthquake was relatively light, but effects were nevertheless seen at two landmarks in Washington: the Washington Monument and the National Cathedral.

Although the quake did not wreak significant harm, scientists nevertheless wanted to investigate what effects it had. Such work can shed light on what damage pattern the United States might expect if another earthquake as large or larger happens again in this region.

Key information on the quake came from the U.S. Geological Survey's website, "Did you feel it?" which lets people report when and where they felt a temblor and its intensity. About 148,000 people from more than 3,400 ZIP codes gave responses regarding the Virginia quake, breaking the site record by more than 70,000 responses since it went online in 2000.

All told, scientists determined that the earthquake was felt as far west as the Mississippi River, as far south as northern Florida and as far north as southeastern Canada. The geologic properties of the rock east of the Rocky Mountains cause seismic waves from earthquakes in the eastern United States to propagate more strongly to greater distances from the epicenter than seismic waves in the western part of the country, researchers said.

Since the Virginia earthquake shook several cities, including Baltimore, Philadelphia, New York and Washington, tens of millions of city dwellers probably felt the quake, the scientists estimated. Overall, they say, approximately 100 million people may have felt the quake -- nearly a third of the U.S. population -- meaning it was probably felt by more people than any other temblor in U.S. history.

Within days of the quake, the earthquake research community dispatched seismographs and other monitoring equipment near the quake's source, collecting data on the aftershocks. "This eventually produced the best recorded aftershock sequence in the eastern U.S.," researcher Wright Horton, a geologist at the U.S. Geological Survey National Center in Reston, Va., told OurAmazingPlanet.

A question researchers now would like to answer is whether this earthquake was "central Virginia's 'Big One,' or if there is evidence of even larger earthquakes in the past," Horton said. "Analysis of the aftershock sequence should reveal more about the fault that caused the earthquake as well as ground motions and aftershocks to be expected from future earthquakes along the Eastern Seaboard."

Scientists continue to investigate the quake with fieldwork at the site, analysis of old faults and past quakes, airborne lidar (laser scans) and magnetic, gravity and radiometric measurements to image the Earth from the surface to the earthquake source 3.7 miles (6 kilometers) underground. All this "will help in assessing the likelihood of future earthquakes as large or larger than magnitude 5.8 in the Central Virginia seismic zone," Horton said.

The scientists detailed their findings in the Aug. 14 issue of the journal Eos.

This story was provided by OurAmazingPlanet, a sister site to LiveScience. Follow OurAmazingPlanet for the latest in Earth science and exploration news on Twitter @OAPlanet. We're also on Facebook & Google+.