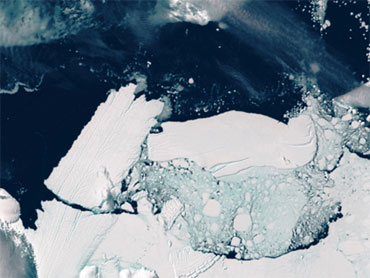 A massive iceberg struck Antarctica, dislodging another giant block of ice from a glacier, Australian and French scientists said Friday.

The two icebergs are drifting together about 62 to 93 miles (100 to 150 kilometers) off eastern Antarctica following the collision on Feb. 12 or 13, said Australian Antarctic Division glaciologist Neal Young.

"It gave it a pretty big nudge," Young said of the 60-mile (97-kilometer) -long iceberg, about the size of Luxembourg, that collided with the giant floating Mertz Glacier and shaved off a new iceberg. "They are now floating right next to each other."

The new iceberg is 48 miles (78 kilometers) long and about 24 miles (39 kilometers) wide and holds roughly the equivalent of a fifth of the world's annual total water usage, Young told The Associated Press.

The iceberg that hit the Mertz Glacier is called B9B and had broken free from another part of Antarctica in 1987. It has been nuzzling and shifting alongside the Mertz for about 18 years before this month's dislodging, said Benoit Legresy, a researcher with the LEGOS laboratory for geophysical studies in Toulouse, France.

"It was a slow process," Legresy said. He said B9B was "sitting there, it must have been pushed and pulled by the current every day and used as a hammer to bang on the other one by the ocean currents."

The dislodging occurred because of the iceberg's latest location and water that had warmed during Antarctica's summer, leaving less sea ice, Legresy said.

Some experts are concerned about the effect of the massive displacement of ice on the ice-free water next to the glacier, which is important for ocean currents, while others are less concerned.

Experts say this type of iceberg calving happens from time to time and these are not record large icebergs.

This area of water had been kept clear because of the glacier, said Steve Rintoul, a leading climate expert. With part of the glacier gone, the area could fill with sea ice, which would disrupt the sinking ability of the dense and cold water.

This sinking water is what spills into ocean basins and feeds the global ocean currents with oxygen, Rintoul explained.

As there are only a few areas in the world where this occurs, a slowing of the process would mean less oxygen supplied into the deep currents that feed the oceans.

"There may be regions of the world's oceans that lose oxygen, and then of course most of the life there will die," said Mario Hoppema, chemical oceanographer at the Alfred Wegener Institute for Polar and Marine Research in Germany.

But oceanographer Mike Meredith of the British Antarctic Survey said he doubts that will happen. There are other places around the world where oxygen sinks with cold water and for this to be a problem it would have to last over many years or decades.

The icebergs, weighing 860 billion tons and 700 billion tons respectively, are in water over the Antarctic Continental Shelf, Young said.

"We expect them to head west along the Antarctic coastline," he said.

Young said it was not likely they would reach as far north as Australia, and noted icebergs move slowly.

Oxygen levels being fed into the world's ocean currents are now changing "and the overturning circulation currents will respond to that change," Rintoul said. Observing what happens "will ... allow us to improve predictions of future climate change," he added.