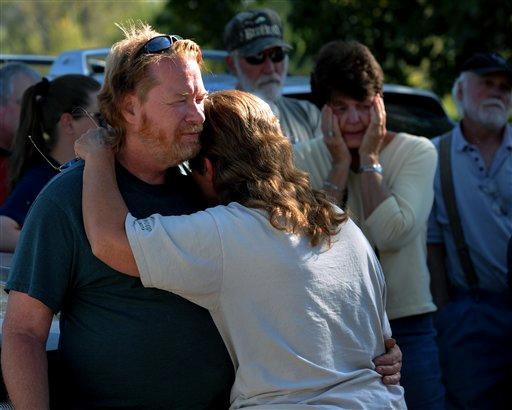 Two former New York police detectives convicted of moonlighting as contract killers in eight mob hits were sentenced Friday to life in prison after telling a judge they were innocent.

"I was a hard-working cop," Louis Eppolito told U.S. District Judge Jack Weinstein in federal court in Brooklyn. "I never hurt anybody. I never kidnapped anybody. ... I never did any of this."

Eppolito was sentenced to life in prison for his conspiracy conviction plus 100 years for various other offenses including money laundering, and fined $4.7 million. Stephen Caracappa received a life term plus 80 years, and a $4.2 million fine.

Eppolito, 61, and Caracappa, 67, had worked as partners on the police force and logged a combined 44 years on the job. They were found guilty of secretly being on the payroll of Luchese underboss Anthony "Gaspipe" Casso starting in the 1980s.

Prosecutors said the pair used their police credentials to make traffic stops that ended with the driver killed. They also said the officers kidnapped a man suspected in an attempted mob hit against Casso and turned him over to a mobster responsible for 36 slayings.

The former detectives also were accused of providing bad information that led to the mistaken-identity murder of an innocent man killed as his mother washed the dishes following a Christmas Day family dinner.

Eppolito and Caracappa were arrested during a 2005 drug sting in Las Vegas, where they had retired.

The case had been marked by legal twists, including the judge's 2006 decision to throw out a conviction after finding that the statute of limitations had expired on the slayings. An appeals court reversed the decision last year, clearing the way for the sentencing.

U.S. Attorney Benton Campbell said in a statement that he hoped the sentences would bring closure "for the families of the victims of these defendants' unspeakable crimes and for the citizens of the city whose trust they betrayed."

Vincent Lino, the son of one of the victims, told the former officers: "May you have a long life in prison."

Caracappa told CBS News' Ed Bradley during a 60 Minutes interview in 2006 that the allegations against him were ridiculous.

"It's ludicrous. Anybody that knows me, knows I love the police department. I couldn't kill anybody. I shot a guy once on the job, and I still think about it. It bothers me," he said in 2006.