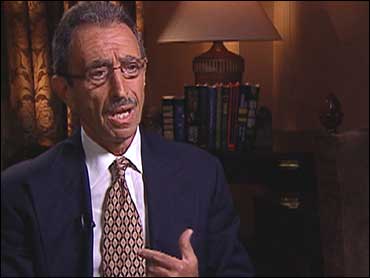 Over the years, 60 Minutes has done its share of stories about police corruption, but none more outrageous than the one you're about to hear. As 60 Minutes first reported in January, it's the story of two New York City police officers who were accused of being hired killers for the mafia.

In the weeks before the trial, one of those detectives, Stephen Caracappa talked with correspondent Ed Bradley for his first television interview and answered the allegations that he betrayed his badge and became a mafia hitman.

Caracappa told Bradley the allegations against him are ridiculous. "It's ludicrous. Anybody that knows me, knows I love the police department. I couldn't kill anybody. I shot a guy once on the job, and I still think about it. It bothers me," he said.

Why does he think police went after him?

For most of his 23-year career in the New York City Police Department, Stephen Caracappa was widely respected for his tenacity and savvy in cracking complicated cases. He rose from street patrolman to undercover narcotics officer, to first-grade detective, receiving numerous commendations along the way.

He helped create the prestigious organized-crime homicide unit. His mission was to investigate the Lucchese crime family but instead, prosecutors say that in 1985 Caracappa and his former partner Louis Eppolito actually joined the family, and began working for its brutal boss, Anthony "Gaspipe" Casso.

Speaking to Ed Bradley in a 1998 prison interview, Casso said, "I have two detectives that work the major squad team for the New York Police Department."

Asked what their names were, Casso told Bradley, "Lou Eppolito and Steve – he's got a long last name, Ca... Capis..."

"Caracappa yeah," Casso replied. "Caracappa, whatever it is. I can't say it all the time you know. Louis is a big guy who works out. Steve is a little small skinny guy."

Casso remains in the prison, serving a life sentence after admitting to 36 murders. He told Bradley about the extraordinary relationship he had with Detectives Caracappa and Eppolito. He also told his story to federal prosecutors, spelling out how, for a hefty salary, Caracappa and Eppolito would walk right up to Casso's enemies, trick them into believing they were under arrest, and then deliver them to Casso to be executed.

That's exactly what Casso told 60 Minutes the detectives did to a young hood named Jimmy Hydell.

"They put him in the car. The kid thought they were taking him to the station house. But they took him to a garage. When they got to the garage, they laid him on the floor; they tied his feet, his handcuffs, put him in the trunk of the car," Casso said. "After that, I killed the kid. Myself, at that time I gave Louis and Steve, I think, $45,000 for delivering him to me."

"You gave them a bonus for delivering some one to you, you killed?" Bradley asked.

"Right. Well they wanted to kill for me. I didn't even have to do it. They were gonna get him, kill him and do whatever I wanted to do with him," Casso replied in the 1998 interview.

What about Casso's claim that he had met Caracappa during the alleged delivery of Jimmy Hydell?

Asked why Casso would lie, Caracappa said, "To save himself, I would assume. But, why would he use me? I don't know."

Casso was, in fact, hoping to save himself, and reduce his sentence, when he first told his astonishing account to investigators 12 years ago. But prosecutors say they couldn't charge Eppolito and Caracappa then because they couldn't prove Casso's story.

But now they have witnesses to many of the murders who corroborate what Casso had to say. Among them is Jimmy Hydell's mother, who told investigators that the detectives came to her house looking for her son a few hours before he was abducted and killed, and a garage worker who told authorities where to dig up the body of another man Caracappa and Eppolito allegedly buried beneath a lot in Brooklyn.

The most brazen crime former Detectives Eppolito and Caracappa are accused of took place along New York City's Belt Parkway. Allegedly in broad daylight, the two detectives pulled over a car driven by a mobster named Eddie Lino. They flashed their badges, and according to prosecutors, shot him dead.

"I gave them $75,000. They killed him, like, cowboy style. They pulled alongside of him. They shot him. They made him crash into the fence alongside the Belt Parkway on the service road. Right? Then Steve got out of the car, ran across the street and finished shooting him. Finished killing him in the car," Casso said during the 1998 interview.

It's a claim Caracappa denies. "I was a New York City detective for 23 years. We don't go around killing people. I did not kill Eddie Lino. I'm not a cowboy," he told Bradley.

"So, that doesn't, you know, that's not a good answer for me to say, 'I didn't do it because I'm on the job,'" Bradley pointed out.

"No, it's my answer. It's my answer because I have pride in myself, Mr. Bradley," Caracappa replied. "I wouldn't do something like that. Put my life in jeopardy. My family. Disgrace the badge. Disgrace the city. Take everything that I had worked for my whole life and throw it away? And, killed somebody in the street like a cowboy? That's not my style. It's not me."

"If you thought you wouldn't get caught?" Bradley asked.

"Get caught? Everybody gets caught. And, the person who did this is gonna get caught," Caracappa responded.

Caracappa said he was also speaking for his friend and co-defendant Louis Eppolito, who declined 60 Minutes' request for an interview.

But prosecutors say Stephen Caracappa left a paper trail – a key piece of evidence – proving he used his position to access police department computers and funnel confidential information to Anthony Casso about the whereabouts of his enemies. One of them was a mobster named Nicholas Guido.

Investigators say Caracappa ran that name through his computer, mistakenly came up with an address for the wrong Nicholas Guido and a few weeks later, it led Casso to kill an innocent man.

"I don't remember running Nicholas Guido in the computer. But if they have a printout saying I did, I probably did. I ran countless names in the computer," Caracappa said.

Asked if he thought Guido's murder was just a coincidence, Caracappa told Bradley, "I don't know if it's a coincidence. But, if I did anything and I had to run a name, it's down on paper and it's documented why I did it…. And, who I did it for. And, I definitely didn't do it for any wise guy."

Stephen Caracappa's former lawyer, Ed Hayes, argues it would have been implausible for a first-grade detective like Caracappa to make such a rookie mistake.

"If he had been looking for the right Nicky Guido, it would have been easy for him to find him," Hayes said. "It's practically impossible to me to assume that he would have made this mistake. Because he's based his whole career on avoiding that kind of mistake, assuming you're going to kill people for money, you want to kill the right guy. Not the wrong guy. Otherwise you got to kill two people for the price of one, right?"

Maybe he was just sloppy.

"Yeah. Maybe he made a mistake. Or maybe he didn't do it," Hayes told Bradley. "But in our system, you don't convict somebody on a maybe."

While that may be, prosecutors obtained information from a former top associate of Anthony "Gaspipe" Casso named Burton Kaplan, a convicted narcotics trafficker, who claims he personally paid detectives Caracappa and Eppolito when they committed murders for Casso. Ed Hayes says neither Casso nor Kaplan have any credibility.

"You have several individuals that even by criminal standards are revolting. And I think they saw this as an opportunity to make a plan, where they could get special treatment and get out of jail. And in fact, Burt Kaplan, who's a drug dealer, a super large money launderer, has gotten out of jail because of making these accusations," Hayes said.

Stephen Caracappa said he knew he was being framed. And he says he has a good idea why he was implicated in the first place: his relationship with Louis Eppolito, who came from a family of mobsters, and wrote a book about it, titled "Mafia Cop: The Story of an Honest Cop Whose Family Was The Mob."

In the book, Eppolito brags about socializing with mobsters and torturing suspects when he was on the job.

Asked if he feared jurors might know of the book and lump him in by guilt of association, Caracappa said, "It could be. But if you knew Louie Eppolito and you spoke to Louie Eppolito, and you spent any time with him, you would see he couldn't do that. The guy is gentle."

But there's a separate case that paints a dark picture of Louis Eppolito, involving Barry Gibbs, who spent 19 years in prison for a murder prosecutors now say he didn't commit. He was freed eight months ago, after a judge ruled that Det. Eppolito, who investigated the crime, intimidated the only eyewitness in the case into falsely testifying against Gibbs.

That eyewitness who testified against Gibbs was a former Marine, Peter Mitchell. In 1986, Mitchell saw a man dumping a woman's body along a road in Brooklyn. He gave a description of the suspect to Eppolito, who was on the scene investigating the murder, and while his description bore no resemblance to Barry Gibbs, Mitchell says Eppolito threatened to hurt him and his family, if he refused to pick Gibbs out of a police lineup and point the finger at him in court.

Mitchell admitted he knew he was lying on the stand and that his testimony would land Gibbs in jail.

"Yeah, but you know what? I don't want this cop after me," Mitchell said.

How could he do that?

Mitchell said that if he hadn't fingered Barry Gibbs, he would be dead.

As for Barry Gibbs, he would still be in prison today if prosecutors hadn't stumbled across his case file last spring during a search of Louis Eppolito's home. Eppolito has not been charged with any criminal wrongdoing in this case, and claims he did nothing improper. The former detective made a brief statement to reporters about the eight murder charges against him.

"I was a very highly decorated cop. I worked very hard my whole life and I just wanted people to know I'm not the person that they're portraying me," he said.

Asked by a reporter if he was ever a bad cop, Eppolito replied, "Never in my life, never."

The question for the jury in this case was: did two decorated police officers cross the thin blue line and become hitmen for the mafia?

"You must know that if you get convicted on even one of these murder charges, you'll go down in history as one of the most corrupt cops in the history of the department," Bradley said.

"That's true, Mr. Bradley, but I won't be convicted, because I didn't do this," Caracappa replied. "I won't, didn't do it. So I'm not gonna be convicted. I won't have that on my epitaph."

Stephen Caracappa and Louis Eppolito are set to be sentenced next week. They face the possibility of life in prison. Meanwhile, the judge who presided over the trial has said the former detectives could have grounds to appeal their conviction.

How deepfakes could soon change our world

7/31/2022: Deepfakes, Drawing Truth to Power, King of the Deep
Thanks for reading CBS NEWS.
Create your free account or log in
for more features.
View CBS News In
CBS News App Open
Chrome Safari Continue
Be the first to know
Get browser notifications for breaking news, live events, and exclusive reporting.