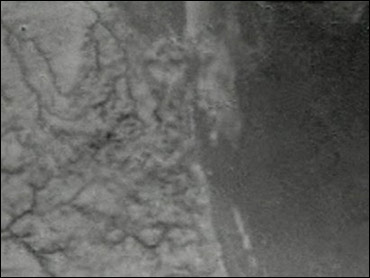 A European space probe Friday sent back the first detailed pictures of the frozen surface of Saturn's moon Titan, showing stunning black and white images of what appeared to be hilly terrain riddled with channels or riverbeds carved by a liquid.

One picture, taken about 10 miles above the surface as the Huygens spacecraft descended by parachute to a safe landing after a seven-year voyage from Earth, showed snaking, dark lines cut into the light-colored surface.

"Clearly there is liquid matter flowing on the surface of Titan," said scientist Marty Tomasko of the Lunar and Planetary Laboratory at the University of Arizona, in Tucson, which made the probe's camera.

He said the liquid appeared to be flowing into a dark area at the right side of the image.

"It almost looks like a river delta," he said. "It could be liquid methane, or hydrocarbons that settled out of the haze" that envelops Titan.

Another image, taken about five miles above the surface, showed light and dark masses, which Tomasko said seemed to be shadows, indicating a varied terrain. The dark areas appeared to be flooded or to have been so at an earlier time.

The Digital Seven: Internet Guardians in Case of Catastrophe

Why is your baby crying? There's an app for that

A third image taken at the surface showed several large white chunks — boulders or blocks of water ice — in the foreground and a stretch of gray surface behind them.

"There aren't too many planets with liquid," Tomasko said. "There's Earth, and now there's Titan."

Titan is the first moon other than the Earth's to be explored. Scientists believe its atmosphere is similar to that of the young Earth, and studying it could provide clues to how life arose here.

Titan has a dense nitrogen atmosphere and chemical processes that scientists believe mirror conditions on Earth shortly after the planet's formation, says CBS News Space Consultant Bill Harwood. Given the chemical constituents, the low temperatures and high pressures at the surface, theorist predict hydrocarbon rain and, possibly, lakes or streams of ethane and related compounds on the surface. Or, perhaps, some sort of hydrocarbon sludge.

"I think all of us continue to be amazed as we watch our solar system unveil," NASA science administrator Alphonso Diaz said as the extraordinary images were displayed on screens at mission control in Darmstadt.

"It challenges all our preconceptions that all these planets are static places. Seeing a planet emerge that has dynamics and complexity to it is just amazing."

Huygens was spun off from the Cassini mother ship on Dec. 24 before its descent to the surface of Titan. The mission is a joint effort among NASA, the European Space Agency and the Italian space agency.

"I'm shocked. It's remarkable," said Carolyn Porco of the Cassini Imaging Center. "There are river channels. There are channels cut by something ... a fluid of some sort is my best guess."

"This mission has been like a fantasy come true," she told CNN. "It's a great moment not only for science but for humankind."

Applause erupted at mission control in Darmstadt at news of the data transmission from the probe.

"The scientific data we are collecting now shall unveil the secrets of this new world," said Jean-Jacques Dordain, ESA's general director. "This is a fantastic success for Europe."

The heart of the mission was the probe's 2½-hour parachute descent, taking pictures and sampling the atmosphere before landing on Titan, where temperatures are estimated at 292 degrees below zero.

Early signals confirmed it had powered up for entry and deployed the parachute, and officials were confident it had made a safe landing because Huygens was designed to go on transmitting from the surface for at least three minutes before its batteries died — a total transmission of less than three hours. But the signal kept coming for more than five hours.

Mission officials — who have waited since 1997 for Huygens to reach its destination — had tears in their eyes as the first signal was picked up, indicating the probe was transmitting to the Cassini mother ship.

Named after Titan's discoverer, the 17th century Dutch astronomer Christiaan Huygens, the probe carries instruments to explore Titan's atmosphere and find out whether it has the cold seas of liquid methane and ethane that have been theorized by scientists.

Timers inside the 705-pound probe awakened it just before it entered Titan's atmosphere. Huygens is shaped like a wok and covered with a heat shield to survive the intense heat of entry.

The probe was designed to shed its heat shield during descent and use a special camera and instruments to collect information on wind speeds and the makeup of Titan's atmosphere for transmission back to Cassini and relay to NASA's Deep Space Network in California and to ESA controllers in Darmstadt.

Titan is the only moon in the solar system known to have a significant atmosphere. Rich in nitrogen and containing about 6 percent methane, its atmosphere is believed to be 1½ times thicker than Earth's.

Alphonso Diaz, science administrator for NASA, said Titan may offer hints about the conditions under which life first arose on Earth.

"Titan is a time machine," Diaz said. "It will provide us the opportunity to look at conditions that may well have existed on Earth in the beginning. It may have preserved in a deep freeze many chemical compounds that set the stage for life on Earth."

Part of a $3.3 billion international mission to study the Saturn system, Huygens is also equipped with instruments to study Titan's surface upon landing.

The Cassini-Huygens mission was launched on Oct. 15, 1997, from Cape Canaveral, Fla., to study Saturn, its spectacular rings and many moons.