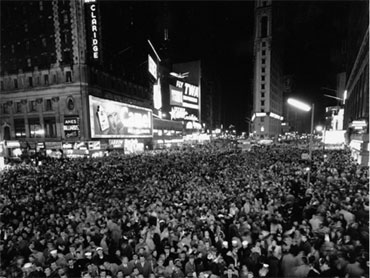 Many of us may be looking back on 2009 and exclaiming what a year! . . . but there's no telling whether future historians will agree. Take, for example, the mixed judgments you can find about a year that concluded half a century ago. Senior political correspondent Jeff Greenfield reports our Cover Story:


The year 2009 is barely in our rearview mirror, but already we know some events this year will continue to loom large.

The inauguration of the first black president . . . the collapse of the once-mighty American auto industry . . . the struggle to revive the country's economy.

But in the longer view of history, how significant will this past year be? How will 2009 compare with other clearly consequential years?

Will it compare, for example, to 1945, which marked the end of a world war, the death of the most powerful of men, and the birth of a weapon that would define the coming age?

Or how about 1968, when at home a war-turned-quagmire brought a challenge to a sitting president, and the murder of the civil rights leader triggered violence in city after city - followed just a few months later by the killing of a potential president and riots at a political convention to end all conventions.

Now, consider the year 1959. Could that really be a year that changed everything?

The last year of the fifties, a decade whose image is all but etched in stone: men in grey flannel suits, Stepford wives in suburban complacency, a veritable white bread sandwich of a time?

Would anyone seriously claim that this was a time when the Earth moved, when foundations began to crumble?

"There was this growing sense that things were changing," he said. "The new is good. The new is something worth embracing."

Kaplan's argument ranges far and wide. From science and technology come the birth of the microchip, without which "We couldn't have digital telephones," Kaplan said. "We couldn't have satellites. I mean, there's almost nothing that we have in everyday life that doesn't have microchips in it."

1959 also brought the first steps toward the birth control pill.

"This allowed not just a sexual revolution, but it allowed women to get jobs, to advance professionally," Kaplan said. "They could control their own reproductive cycles that control everything about their lives. I mean, that was immense." 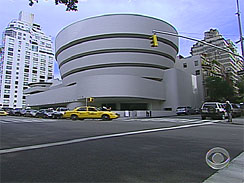 (CBS)
In the arts, says Kaplan, 1959 brought upheaval upon upheaval: The opening of the Guggenheim Museum in New York (left), whose very architecture challenged its neighbors . . . and whose collection was the first wholly devoted to abstract art.

In music, Miles Davis and Ornette Coleman, were breaking the chord structure of older jazz.

And censorship was dealt a fatal blow when a court permitted the distribution of the openly sexual "Lady Chatterly's Lover."

"Up until there were all these pulls, which constrained where things could go," Kaplan said. "And in that year, you had the first breaking out from that pull."

But can a single year like 1959 really bear all that weight? Kaplan says the year was significant in civil rights - a federal commission held hearings, and the lynching of Mack Charles Parker triggered national outrage.

But wait a minute. Think about the civil rights movement. Does 1959 really measure up?

Does it equal 1954's Supreme Court decision striking down school segregation? Or the Montgomery bus boycott of 1956? Or the lunch counter sit-ins across the South that began in 1960?

And what about dating the birth control pill to 1959? Yes, research began that year, but should we measure the impact of the pill when research began, or when it first went on the market, in the 1960s?

And, most fundamentally, does history really work this way? Are some years far more equal than others? Ask two people which year they think was especially significant, and you're likely to get two different opinions.

Newsweek editor and Pulitzer Prize-winning historian Jon Meachem says, "There are years in which reality was one way before they started, and another way afterward. You think about 1968, You think about 2000.

"I think you could find any year in American history, and say X or Y began, or ended, whether it's somebody being born, whether it's the invention of something."

Writer Christohper Hitchens points to one of the most frequently-cited of all years as worthy of special attention: 1914 - the year the First World War began.

"A step was taken into apocalypse and revolution and mass-produced industrialized violence and cruelty, then, that couldn't be taken back again," he said. "It's the hinge event."

But Hitchens and Meachem agree that to some extent, viewing history as discrete events in particular years is a kind of organizing tool.

"Remember what Napoleon said about history? It's a fable agreed upon," said Meachem. "I think it's essentially what we're talking about, is that we find ways to organize our experience, in order to understand what happened and why, and whether we can learn anything from it."

So what about the case for 1959? Fred Kaplan answers the challenge to defend his year:

"Right, of course. I'm referring to this as a pivotal year when something changed. Now, you don't see all the results of the change in the year when it begins to change. All I'm saying is that everything that followed stemmed from changes that took place then."

For more info:
"1959: The Year That Changed Everything" by Fred Kaplan (Wiley)

Preview: Howard Stern on Donald Trump, as a guest and a president

Looking back at Tiananmen Square