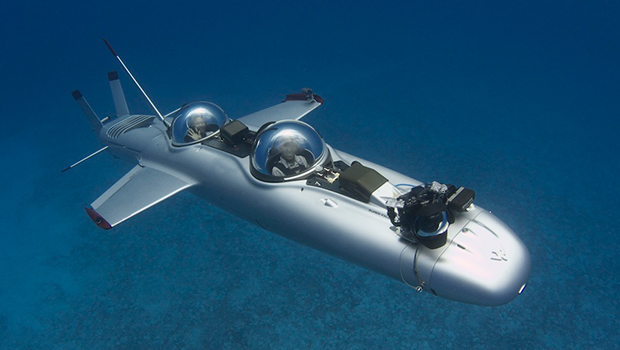 Adventurers with deep pockets can now explore the hidden depths of the ocean, thanks to a futuristic submarine that lets users "fly" underwater.

The DeepFlight Super Falcon, developed by California-based Hawkes Ocean Technologies, is a two-seater, winged submersible that can take passengers on undersea joyrides. The custom-built underwater vehicles are designed to dive below the surface, swim amongst marine animals, deftly navigate throughunderwater canyons, and even perform aquatic barrel rolls, reported the San Francisco Chronicle.

"It is like an airplane with wings upside down," Graham Hawkes, founder and chief technical officer of Hawkes Ocean Technologies, told the Chronicle. "It is like flying in the air, but we are flying underwater."

The submarine is 21 feet (6.4 meters) long, and has a wingspan that stretches nearly 9 feet (2.7 m). The submersible can carry two or three passengers, depending on the configuration of the vehicle, and can dive to a depth of about 394 feet (120 m). [See Photos of the DeepFlight Super Falcon Submersible]

Traditionally, submarines are constructed with an inner shell and an outer shell. To dive, submarines fill the space between the two shells with water, changing the ship's density and creating so-called negativebuoyancy — when the gravitational tug on the sub is greater than the force of buoyancy. When submarines remain on the water's surface, the area between the two shells is filled with air, which again changes the vehicle's density and enables it to float.

The Super Falcon, however, dives underwater like a whale, using thrust to generate "downward lift" to help the vehicle descend below the water's surface. Essentially, the submarine uses lift and drag — the principles of regular flight — to "soar" underwater.

This means the Super Falcon is always positively buoyant — or remains floating unless some mechanical device or additional weight is used — which is a key safety feature of the winged submersible, according to company officials. If an emergency occurs, or the vehicle loses power underwater, it will simply float back to the surface.

"It looks like a James Bond wild machine, but it is positively buoyant, so it's really safe," Karen Hawkes, Graham's wife and the vice president for marketing, told the Chronicle.

Hawkes Ocean Technologies, founded in 1996, got its start designing submersibles for the military and scientific communities. In the mid-1990s, the company began developing winged submersibles aimed at the luxury market.

The Super Falcon currently retails for $1.7 million, and includes on-sitepilot and operations training. The vehicles are among the latest high-tech items geared at the super-rich, and the company already boasts some famous clients: Sir Richard Branson, the billionaire British tycoon, has already made several dives in the DeepFlight Super Falcon, and famed American adventurer Steve Fossett commissioned a single-seater sub capable of diving to the bottom of the Marianas Trench before his untimely death in 2007.