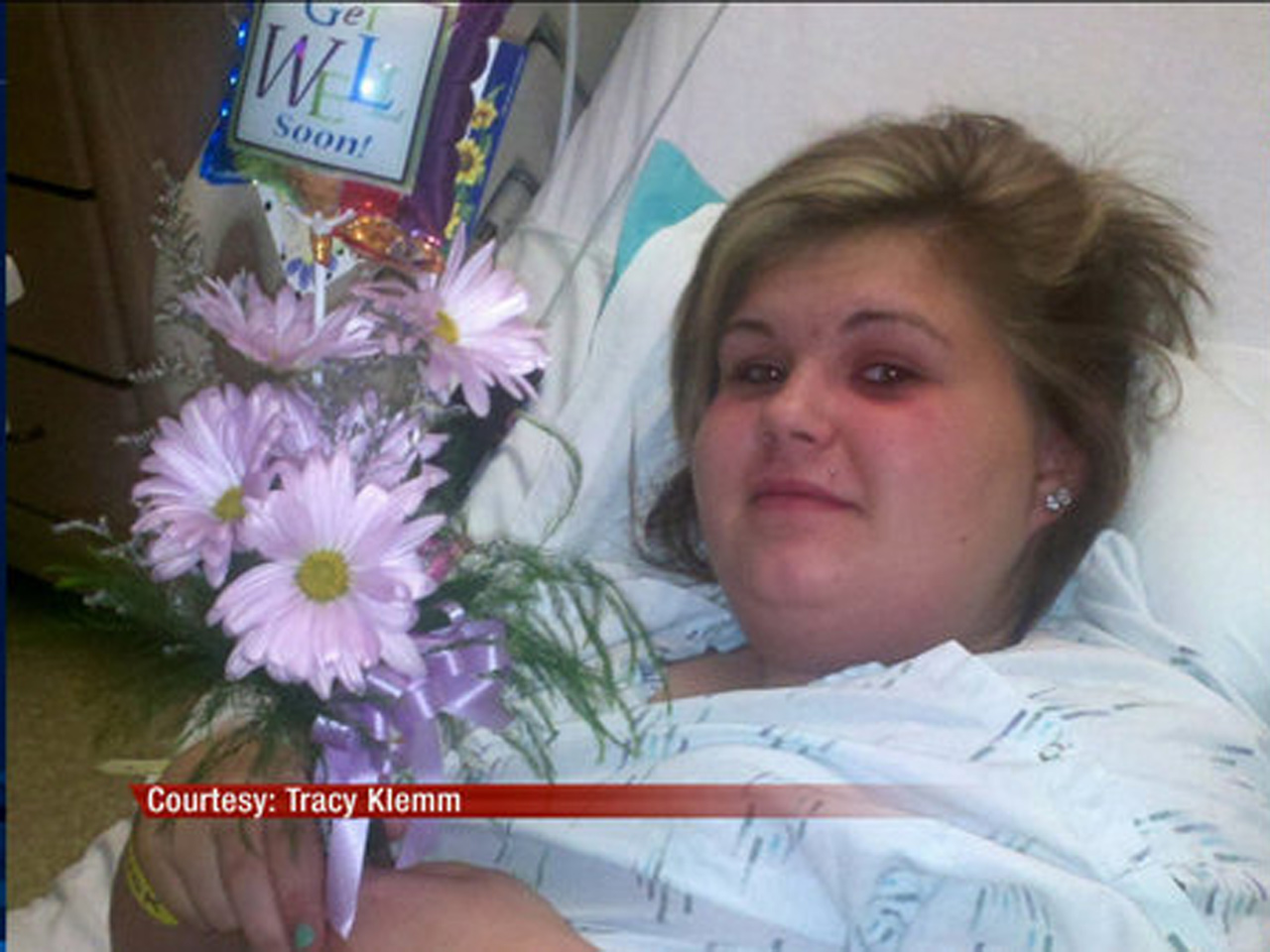 A 16-year-old girl from Indiana has been diagnosed with fungal meningitis, making her potentially the youngest victim who received the tainted steroid injections that have been tied to 23 deaths.

Karissa Klemm of Bristol, Ind. had injured her back while jumping on a trampoline in her backyard, resulting in a herniated disk. She regularly received steroid injections at OSMC Clinic in Elkhart to relieve the pain. However, after one injection, her discomfort returned rather quickly.

"I just told my mom that my headache was extremely bad, and I was getting sick to my stomach, and my neck started getting stiff," Karissa told CBS affiliate WSBT in South Bend, Ind.

Doctors at Elkhart General Hospital confirmed she had fungal meningitis.

"It was really heartbreaking and then I didn't want to watch the news anymore and know the death tolls, because even though they said it was early, I just had a fear that something bad could happen," her mother, Tracy Klemm, said to WSBT.

The outbreak of fungal meningitis, an inflammation of the lining of the brain and spinal cord caused by a fungus, has infected 308 people in 23 states. All the victims received a steroid shot, preservative-free methylprednisolone acetate, made by the New England Compounding Center. Shots were also given at sites were people experienced pain, such as the ankle or knee, but the majority were given in the back.

Fungus was found in three lots of the steroids made by NECC. On Oct. 18, federal health investigators confirmed that the fungus found in 50 unopened vials, Exserohilum rostratum, was the same kind found in at least 40 people who were identified as part of the national meningitis outbreak. Exserohilum rostratum is regularly found in dirt and grasses and rarely causes illness. This is the first time it has been known to cause meningitis, but by injecting the tainted substance directly into patients, it put the fungus directly in their bodies.

Workers have come forward to CBS News and said that the company had some suspicious practices, including handling drug vials without hair nets or gloves and were worried that they had crossed over from compounding -- mixing patient-specific doses of medications - to manufacturing medications. Compounding companies do not fall under the same regulation as drug manufacturers .

"These large drug manufacturers who operate under the guise of traditional pharmacy compounding are clearly violating the law, and they do so because they think they can get away with it," Sheldon Bradshaw, the former chief counsel of the FDA who signed an earlier warning letter to the NECC, told CBS News.

The company voluntary closed operations in September 2012 and initially recalled the three lots sent to clinics in 23 states, about 17,000 single-dose vials. It has since recalled all the medications it made, even though they have not been tied to the outbreak.

"We know that the list of medications is long," infectious diseases expert Dr. John Jernigan, who is leading the clinical investigation, previously told CBS News. "And so far, we haven't identified any cases that we've documented of fungal infections related to any other products, but it's important that we remain vigilant and we continue to investigate this in case that should change."

Karissa had to stay in the hospital for a few days, but she was approved to go home this past weekend. She will be on a twice-daily regiment of anti-fungal pills for the next three months. The pills make her sleepy and cause blurred vision, but she said she feels better and will return to school next week.

Her mother said that someone needs to be held responsible for the outbreak. She plans to sue NECC.

"Hospital bills, doctor bills, prescriptions, it's going to be very costly, not including my time off work and all that," said Tracy.