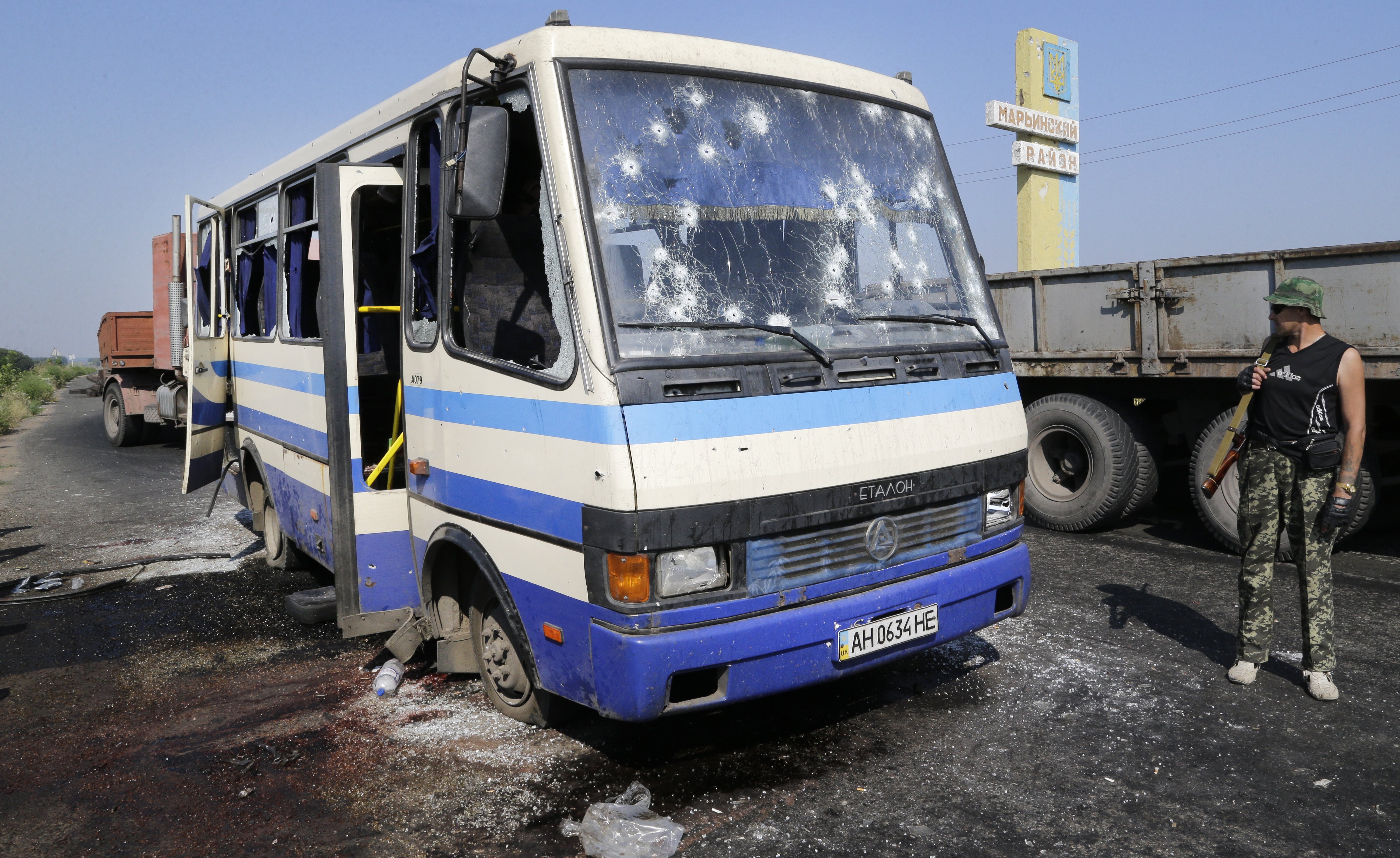 DONETSK, Ukraine -- At least 12 militiamen fighting alongside government troops against pro-Russian separatist rebels in eastern Ukraine have been killed in an ambush, a spokesman for their radical nationalist movement said Wednesday.

Artem Skoropatsky said the fighters with the Right Sector volunteer battalion were shot dead while traveling on a bus outside the rebel-held city of Donetsk, which is under siege by government troops.

Many others in the bus were wounded and taken captive, Skoropatsky said, adding that he could not specify the number.

"There is a suspicion that the wounded will be treated very harshly and could be shot," he said.

The Right Sector volunteer battalion does not formally operate within the government armed forces but coordinates its activities with the security services and the Defense Ministry.

Right Sector played a marginal if highly visible role in the street uprising that culminated in the overthrow of President Viktor Yanukovych in February. Its far-right affiliations have made it a target of substantial lurid reporting in Russia state media, which has sought to cast the leadership that took over from Yanukovych as an extremist cabal.

Andriy Lysenko, a spokesman for Ukraine's National Security and Defense Council, said Wednesday that 11 servicemen were killed in the previous day's fighting, but he could not immediately specify whether that figure included the Right Sector militiamen.

Inside Donetsk, at least three people were killed overnight Tuesday as the government intensifies its shelling campaign.

Residents said the intermittent artillery barrage lasted around two hours. One high-rise building appeared to have been struck five times.

City authorities said 10 residential buildings and the wing of a hospital were struck.

Donetsk city council spokesman Maxim Rovinsky said the shelling Tuesday night was some of the heaviest the city has seen.

Government troops have laid siege to Donetsk and nearby rebel holdings in their push to quash the pro-Russian insurgency. They have largely refrained from street-to-street fighting, favoring often inaccurate rocket fire.

Damage to power generation plants and gas pipelines has left large parts of the city without electricity and gas.

On Tuesday, a convoy of more than 260 Russian trucks reportedly packed with aid rumbled toward the border with Ukraine, but Kiev said the goods would only be allowed in if they were inspected by the international Red Cross.

The tug-of-war over humanitarian aid to Ukraine's rebel-held eastern regions reflected deeper issues than just the need for food, water and shelter in a war-wracked zone where apartment buildings are being hit daily by rockets.

These U.S. companies are still doing business in Russia
More
Thanks for reading CBS NEWS.
Create your free account or log in
for more features.
View CBS News In
CBS News App Open
Chrome Safari Continue
Be the first to know
Get browser notifications for breaking news, live events, and exclusive reporting.