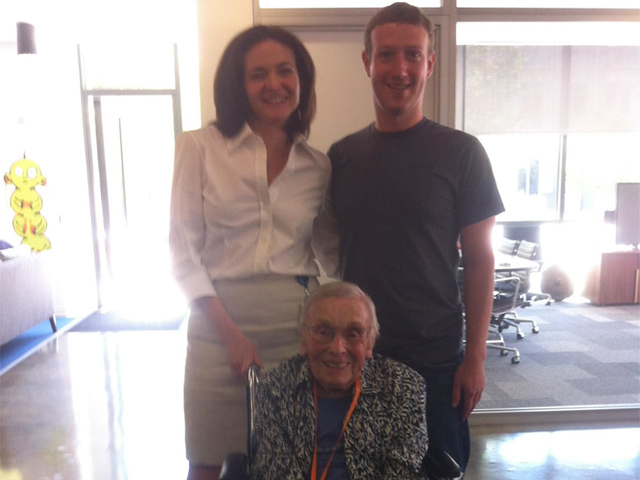 (CBS San Francisco) MENLO PARK, Calif. - Florence Detlor may have been born when William Howard Taft was President, but at the moment she is social media's it girl.

Facebook has confirmed, out of nearly one billion users, she is the oldest registered user of the social networking site at 101 years old.

Detlor brushed off the recent media attention. "It's a matter of circumstance, it just happens to be that way," she said.

The centenarian signed up for Facebook two years ago, after taking a class at a community center near her home in Menlo Park. She has friended around 700 people, but has uploaded only about two dozen photos to her profile.

What does Detlor post? Polite questions such as, "Isn't it good that we don't have to face politics on Facebook?"

"In fact anyone who seems otherwise, we get rid of," Detlor said, referring to un-friending.

On Monday, Detlor took a VIP tour of the social networking giant's headquarters, four and a half miles away from her house. She met CEO and co-founder Mark Zuckerberg, whom she said was reserved.

"He was very pleasant, but he wasn't looking for anybody to appreciate him. He was good enough within himself," Detlor said.

Facebook COO Sheryl Sandberg posted a photo of herself standing next to Zuckerberg, with Detlor sitting in a wheelchair. The picture went viral, as various news agencies reported the story across the globe. Overnight, Detlor received more than 1,500 friend requests.

Detlor said the secret to long life is good genes and a good attitude. And no, she does not think Facebook will help users live longer.