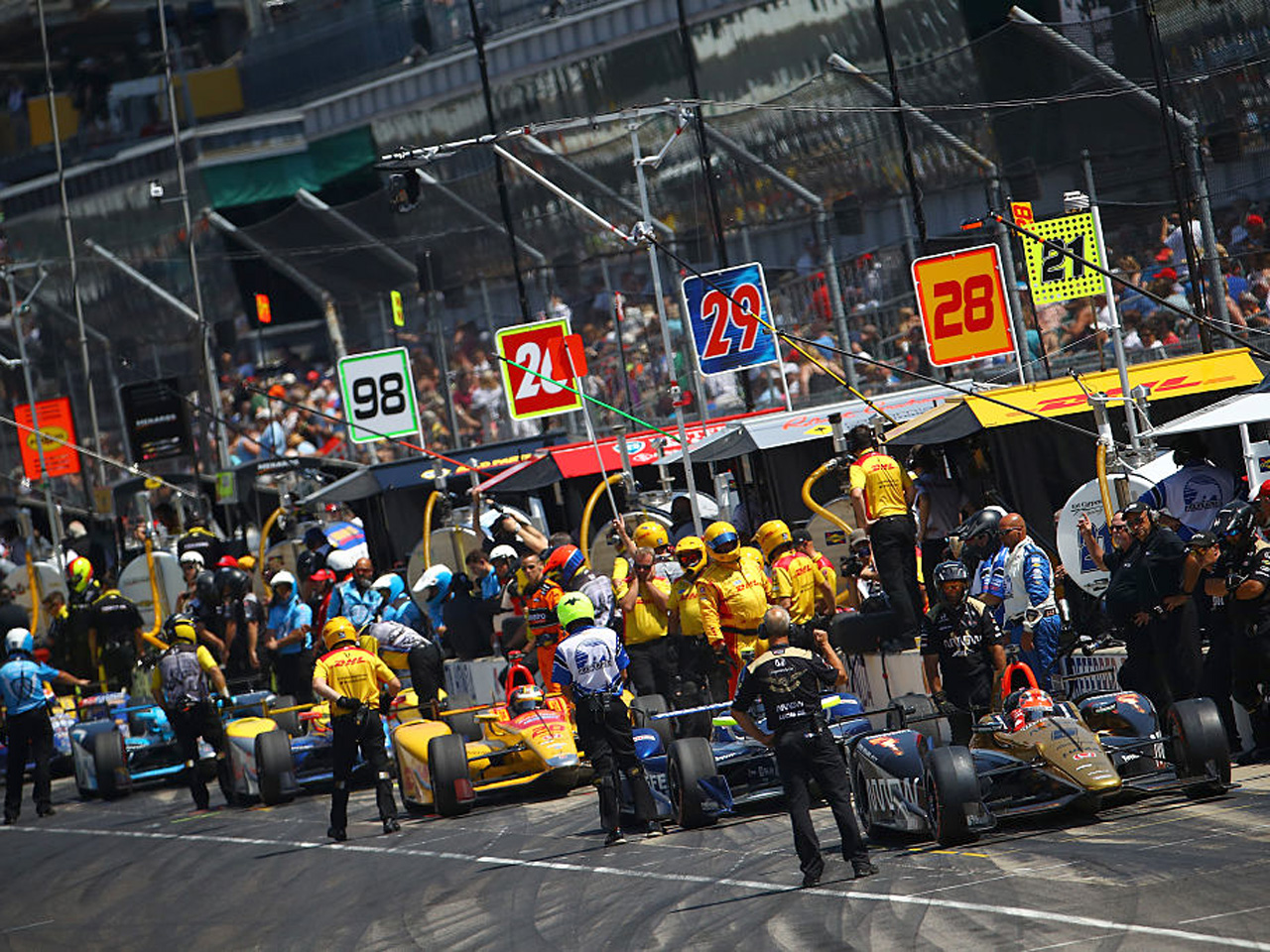 INDIANAPOLIS - Tony Kanaan spent the final practice before the Indianapolis 500 talking to the race track.

He wanted to be kind to the old lady, to land in her good graces before the historic 100th running of "The Greatest Spectacle In Racing."

"I think this track will pick the winner. Whatever she picks, it's going to be a very lucky guy," Kanaan said Friday after landing atop the leaderboard at Indianapolis Motor Speedway. "I'm trying to massage the track a little bit, talk to her nicely and then see if she will pick me on Sunday."

Kanaan has led a total of 715 miles around the sprawling speedway, but it took him 12 tries to win the checkered flag. That 2013 victory was the most important of his career and the Brazilian is eager to try for another in front of the first capacity crowd in the history of a race that was first run in 1911. There could be more than 350,000 people on hand on what is expected to be a warm, sunny day that will be marked by celebration.

"I'm so humbled to be part of this, I've always wanted to be in this race since I was a little kid," he said. "I never really came to this place until I raced in 2002, so I haven't experienced what it's like when this place is sold out. I've been here for 15 years and I've never, never seen anything like this. I hope it's the big jump we need to bring the 500 back to where it belongs."

This centennial running has turned a special event into a once-in-a-lifetime experience. At least 100,000 fans poured into the speedway Friday for Carb Day, the traditional final day of practice. Everyone wants to be part of the show, and every driver wants to win this race.

Marco Andretti has been preparing for Sunday for an entire year.

His family suffers from the notorious "Andretti curse" that has produced just one victory - Mario Andretti in 1969 - despite numerous chances to win. Michael Andretti returned from retirement in 2006 to race against his son, an Indy 500 rookie, and the curse struck again. Michael Andretti held a late lead, only to be passed by his son and then Sam Hornish Jr. went roaring by and passed Marco at the finish line.

"I think about it still every day," Marco said. "See, this place was really, really tough to us. We've been healthy as a family with all the tries, over 70-something tries, we're blessed to be healthy. But man, we've had a lot of plane rides home talking about how we didn't win it, and that's getting old."

This is the one he really wants for his family.

"This whole buildup, all the buzz surrounding this race, I've never been a part of anything like it," he said. "Just to put your mark on the 100th would be huge. I keep saying, 'It's only right an Andretti wins the 100th.'"

Andretti is like the 32 other drivers in the field in their desire to become the 100th face on the famed Borg-Warner trophy.

Among those eyeing the winner's bottle of milk Sunday is Graham Rahal, who is trying to win his first Indy 500 on the 30th anniversary of the race won by his father, Bobby.

More than anything, Rahal is striving to help IndyCar and its cornerstone event use the 100th running to strengthen the series and ensure that the Indy 500 remains a fixture in American sports.

"I put a lot of pressure on myself to try and help this sport grow. If we could win it, obviously it would be a great platform to do even more of that," Rahal said. "Whoever wins this thing needs to be on top of their game and promote like crazy and work hard. I really hope it's an American, honestly. This is going to be a big one. They've captured that audience again that maybe we had lost there for a little bit. Now we've got to keep their attention and keep it going."

Although a pair of Americans - Josef Newgarden and 2014 winner Ryan Hunter-Reay - will start on the front row Sunday, a Canadian will lead the field to the green flag. James Hinchcliffe was the feel-good pole winner for the 500, a year after he nearly died in a crash during a practice session the day after qualifying. His crash caused a part to break off his car and it skewered one of his thighs, causing Hinchcliffe to nearly bleed to death as IndyCar's safety team raced him to emergency surgery.

He watched the 500 from his hospital bed and remembers very little of last May because he was heavily medicated while hospitalized.

"I remember the finish, that battle at the end, that was very fun to watch," he said of Juan Pablo Montoya's showdown with teammate Will Power. Montoya went on to win his second Indy 500.

Montoya would like to repeat this year and give team owner Roger Penske a 17th Indy 500 win. Team Penske is celebrating its 50th anniversary this year, and all four of his drivers want to give the boss the centennial victory.

If Penske gets a win from Helio Castroneves, the Brazilian would become just the fourth driver in history to win Indy four times.

If there was a favorite for this race, it would likely be another Penske driver: Simon Pagenaud has been on a tear this year, his second driving for The Captain. He opened the year with a pair of second-place finishes, then reeled off three wins in a row headed into the 500. Montoya won the season opener, so Penske has four wins in five races this year.

It's been a trend as Chevrolet teams have dominated the series, while Honda is still looking for its first win of the year.

Hinchcliffe on the pole is a start for Honda, as were several strong days of practice by the five Andretti Autosport entries. But many have wondered if the Chevy teams are simply waiting to show their hand on Sunday. That may be slightly true based on the final practice in which Kanaan and reigning series champion Scott Dixon were first and third in their Chip Ganassi Racing Chevys.

Rahal isn't concerned with what Honda will have on Sunday.

"I think Honda's done a good job," he said. "The power plant is pretty good. It's got some juice to it. I'm looking forward to going out there and see if it stays that way for the race."