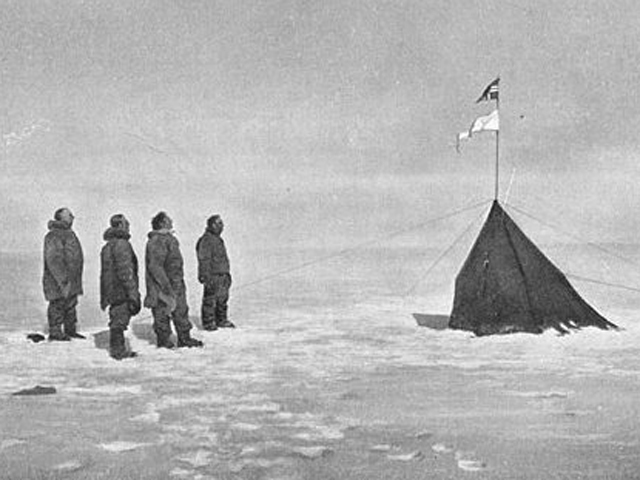 OSLO, Norway - Polar adventurers, scientists and the prime minister of Norway gathered at the bottom of the world Wednesday to mark the 100th anniversary of explorer Roald Amundsen becoming the first to reach the South Pole.

Under a crystal blue sky and temperatures of minus 40 F (minus 40 C), the group remembered the Norwegian explorer's achievement on the spot where he placed his flag on Dec. 14, 1911.

"We are here to celebrate one of the greatest feats in human history," Prime Minister Jens Stoltenberg said as he unveiled an ice sculpture of Amundsen.

Several expeditions skied across Antarctica to attend the ceremony, which was broadcast on Norway's NRK television. Many were delayed and had to be flown the last stretch.

"Our respect for Amundsen's feat 100 years ago grew as we traveled in his ski tracks, and felt the physical challenges he experienced," said Jan-Gunnar Winther, director of the Norwegian Polar Institute.

Winther dropped out of an expedition trying to follow Amundsen's entire route, skiing 800 miles (1,300 kilometers) to the South Pole, and was airlifted the last part. Two other members of his group were racing against the clock to reach the South Pole on Wednesday.

Stoltenberg also honored British explorer Robert Falcon Scott, who lost the race against Amundsen and arrived at the South Pole more than month later, only to find Amundsen's tent, a Norwegian flag and a letter from Amundsen. Scott and four companions died on the way out.

"Scott and his men will forever be remembered for their valor and their determination to reach the most inhospitable place on earth," Stoltenberg said.

Amundsen and his team spent almost two months skiing across the frozen Ross Sea, climbing steep hills to the Antarctic plateau at about 9,800 feet (3,000 meters) and crossing vast ice fields to reach the pole.

During the preparations they placed several depots of food and supplies along parts of the route before the final assault toward the pole. Once there, they spent three days doing scientific measurements before starting the return trip.

Experts agree that Amundsen succeeded because he was better-prepared than Scott. Amundsen used skis and dog sleds, while Scott used motorized sleds that broke down and ponies that couldn't take the cold. The men ended up pulling their sleds themselves.

Amundsen's well-marked depots contained over three tons of supplies, while Scott had fewer and badly marked depots the expedition often couldn't find in the blizzards and cold.

In contrast to the bitter competition between Amundsen and Scott, Stoltenberg pointed out that the South Pole today is marked by international cooperation, regulated by the Antarctic treaty, where peace and stability, environmental activity and scientific research are in focus.

Among the most important fields of research are global warming and its effects on Antarctica.

"The loss of ice in the Antarctic can have grave global consequences. Roald Amundsen and Robert Scott and their men went to extraordinary lengths to accomplish their goals. We must be prepared to do the same," Stoltenberg said, alluding to the struggle against climate change.

Scientists and support personnel from the U.S. Antarctic Program at the Amundsen-Scott research station at the South Pole took part in the ceremony, and stressed the occasion was a special day not only for Norway.

"It's also a special day in human history since the real discovery of the last of the great continents started," said Simon Stephenson, who represented USAP.

The USAP had not wanted a new permanent monument by the scientific base, but the ice sculpture is bound to stay put for a long time since temperatures at the South Pole rarely rise above freezing.

Amundsen disappeared aboard a French Latham 47 flying boat in the Barents Sea on June 18, 1928. The plane had been searching for the gas-filled airship "Italia," which crashed when returning from the North Pole during an expedition led by Italian aeronautical engineer Umberto Nobile.